Warning: mysqli_free_result() expects parameter 1 to be mysqli_result, bool given in /var/www/html/americanthinker/admin/common/functions/func.general.php on line 126
 Obama's Takedown of Industrial America - American Thinker
|

Obama's industrial policy is designed to make America non-competitive in the world economy, destroy millions of jobs, and devastate our manufacturing and industrial capacities. No one will want to invest here, and fewer and fewer U.S. companies will be exporting goods "Made in America." And we have a fierce competitor called China.

How far down this road we already are can be seen in the following data:

But how has China accumulated such a large trade surplus with the U.S.? To answer this vital question, it's critical to understand the currency exchange market's impact on trade. Suppose you want to buy something from China. You need to first buy some of their currency, called the yuan. Now, suppose thousands of people want to buy goods from China. So a whole lot of people start to exchange dollars for yuan in order buy Chinese goods. The same thing happens here: if you and all your neighbors try to buy the same currency, its price increases.  If you are on the other side of this, such as a Chinese citizen holding his or her currency in the yuan, and you want to exchange the yuan for dollars, then you will be able to get more dollars for your yuan as it increases in value. This increase in the value of the yuan makes American goods priced in dollars cheaper for the Chinese to purchase.
As we are increasingly surrounded and overwhelmed by the "Made in China" label, we have come to understand that China's principal economic advantage is "cheap labor."
And it is also clear that they are using this cheap labor to acquire world-class manufacturing and industrial production facilities to help export more and more of this "cheap labor." Thus, they create a virtuous cycle that continues as long as their labor remains cheap.
Here is some data on the long-term growth or decline of manufacturing as a percentage of gross domestic product of the two nations: 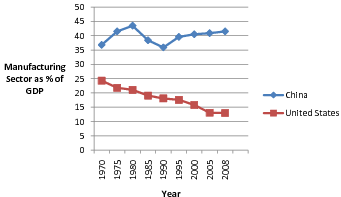