Good News for GOP and Great News for Conservatives

By Bruce Walker
The latest Battleground Poll, the last before the midterm election, has just been released. It has good news for Republicans. By a margin of 48% to 42%, respondents favor Republican congressional candidates over Democrat congressional candidates. Even better, voters now view the two major parties differently: 50% of respondents view the Republican Party favorably, compared to 41% who view it unfavorably; 50% of respondents now view the Democrat Party unfavorably, compared to 42% who view it favorably. Better still, against a generic Republican candidate, President Obama now loses in 2012 by 48% to 42%. 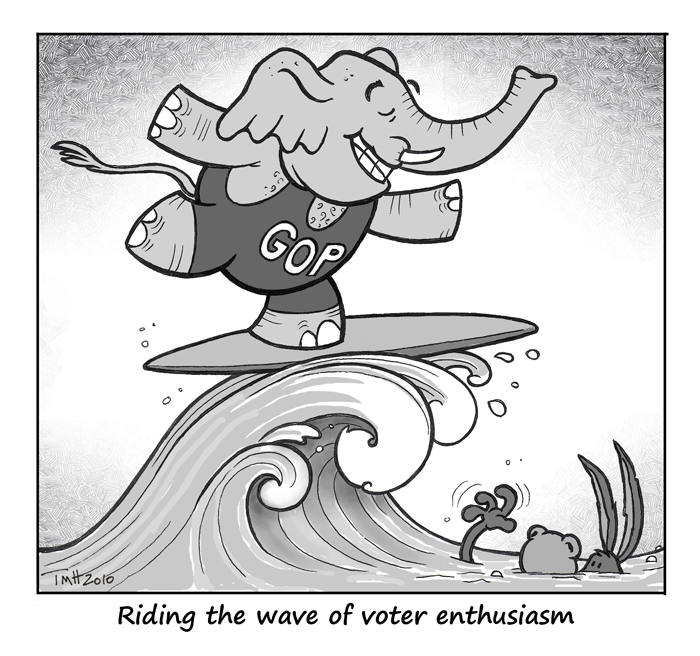 I have been writing about the Battleground Poll for a long time. There are important reasons to take this poll very seriously. The poll is the joint product of a Democrat polling organization, Lake Research, and a Republican polling organization, The Tarrance Group. George Washington University conducts the poll, and anyone who sees a conservative bias in academia should have his head examined. The internal questions of the Battleground Poll are fully reported. This includes, critically, demographic questions so that we know the partisan breakdown of the respondents, and also their marital status, income, age, and religious affiliation. The Battleground Poll is also the most accurate poll in America in predicting election results.
Among the demographic data is a very important nugget of information: the ideological persuasion of respondents in Question D3. The answer to Question D3 is the single most constant response in these polls. In every single one of the last nineteen Battleground Polls over the last decade, about 60% of Americans describe themselves as "conservative," while about 35% of Americans describe themselves as liberal. The October 25, 2010 Battleground Poll is no different: 62% of Americans described themselves as "conservative," and only 35% described themselves as "liberal." Only 2% of Americans call themselves "moderate," and another 2% of Americans were unsure or refused to answer. This anemic response of ideological neutrality is completely consistent in all nineteen Battleground Polls.
Gloomy conservatives who comment on my articles propose reason to doubt this fabulous news. People, some conservatives seem to believe, really do not know what "conservative" means. This makes no sense: respondents are explicitly given the options in Question D3 of choosing "don't know / unsure" or "moderate," but almost no one ever chooses these safe options. Other pessimistic conservatives believe that Battleground Poll respondents are intimidated into choosing "conservative" because of Fox News or Rush Limbaugh. How silly! Nearly all the institutions of power in American life, from public schools to NPR, have been overrun by radical leftists, who portray conservatives as racists, homophobes, Nazis, or morons. Americans describe themselves as "conservative" despite the tremendous pressure to call oneself at least a "moderate."
The biggest reason for trusting that the overwhelming majority of Americans are conservative is the uncanny consistency of the answer to Question D3. Perhaps in one poll, the population sampled might have been confused, but in nineteen straight Battleground Polls over a decade? Statistical validation comes in consistency over time and over different random populations of the data provided. How much has the ideological data varied in last nineteen polls? The number of respondents who call themselves "conservative" has been as low as 58% and as high as 63%. The mean response -- adding all the "conservative" responses together and dividing that sum by nineteen -- provides an average percentage of Americans who call themselves conservative as 61.2%. The mid-range, another statistical averaging tool derived by adding the highest and lowest values and dividing by two, produces an average "conservative" response of 60.5%. Any method of statistical averaging produces the same conclusion: this datum, the sixty percent of Americans who call themselves "conservative," is a very solid number. What percentage of respondents called themselves "conservative" in the October 25, 2010 Battleground Poll? A whopping 62%.
What does this conservative majority mean?  It means that Democrats reject the label of "liberal" and embrace "moderate." It means the left, who invariably tag all conservatives as "far-right-wing," "ultra-conservative," or some insulting term, indeed recognize the existence of ordinary conservatives who favor smaller government, lower taxes, states' rights, restoration of traditional moral values in schools and media, and the de-politicization of everyday life. There is a vast gulf between Stalinists who occupy the choke points of education, information, government, and entertainment in America and us, the huge conservative majority. This disconnect is so vast that there are two Americas: the ocean of conservatives and the small, delusional islands of leftists whose ignorance of America is so profound that they might as well be colonial governors from some European kingdom. It means that "Flyover Country" includes much more than those states called "Jesusland." Flyover Country is all of America, except for imperial enclaves in Washington, Manhattan, Hollywood, and those leftist monasteries called universities. Even Gallup concurs: conservatives outnumber liberals in every state of the union.
There is an inspirational story we should heed. A sailing ship, becalmed in the water and far from land, desperately hailed a passing vessel to send fresh water: the crew was dying of thirst. The other ship responded, "Drop down your buckets. You are in the mouth of the Amazon." Fear, isolation, hopelessness -- these are the only weapons of the left. Once we wake up and know that we are America, the battle is won. The 60% conservative majority is no illusion, no aberration, and no misunderstanding. Our imperial colonial rulers and their paid agents are as popular in America as British soldiers were in Ireland in 1900 or as Soviet troops were in 1980 in Poland. Dip down your buckets. We are in the mouth of the Amazon.