The Recession Ends, Sort Of

The recession ended, as recessions have always done before. But while we seem to be recovering, we have not yet recovered. The real issue is the strength of this recovery and whether government "fixes" helped or hurt. I think they hurt and are still hurting.

Here is what I wrote in April:

Pretty much no matter how you measure it, the Great Recession ended some time between June and December 2009 -- last year. I'm betting that the National Bureau of Economic Research says exactly that very soon. And my best guess of the NBER's best guess is June 2009.

Here is what the NBER released yesterday (September 20).

The Business Cycle Dating Committee of the National Bureau of Economic Research met yesterday by conference call. At its meeting, the committee determined that a trough in business activity occurred in the U.S. economy in June 2009. The trough marks the end of the recession that began in December 2007 and the beginning of an expansion.

The NBER took a little longer than I expected, but otherwise I was right on. Thank you.
Now, some of you are pooh-poohing this announcement, saying we are still in recession. But the end of a recession does not mean "things are back to normal" or "things are where they were before." It sure doesn't mean things are wonderful. A recession is said to end simply when things stop getting worse -- when the "trough" is hit. It does not mean we have arrived at, much less surpassed, our previous peak.
It's easier to explain with a graph. 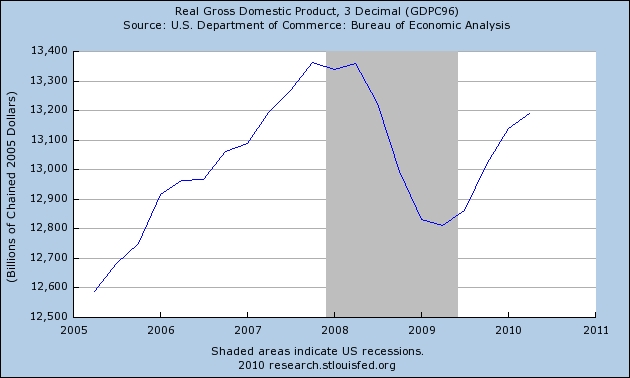 Source: St. Louis Federal Reserve.
You see in the graph that GDP bottomed out in June 2009, matching the NBER's call. But we have not reached the level of our previous peak of December 2007. We are "in recovery," but we have not yet "recovered." The NBER is apparently betting that we will recover (go above the 2007 level) before going as low as June 2009 again. (If not, then "double dip." What the NBER really just told us with its announcement is that it does not expect a double dip.)
We should not try to deny these facts. Real GDP is above its lowest point since December 2007. Unemployment is below its peak. The number of jobs is above its lowest point. Initial jobless claims are below their peak. Industrial production is above its lowest point. We are past the nadir.
But so what? Recessions have always ended. If you want to credit President Obama for ending this recession because it ended on his watch, then we need to also credit every single Republican president since World War II with ending one or more recessions: Eisenhower, Nixon, Ford, Reagan, George H. W. Bush, and George W. Bush.
The troubling aspect of this "recovery" is its weakness. Look at the above graph again and see that GDP appears to be topping off again before even reaching its previous peak. In fact, the last three quarters showed deceleration. Their annualized growth rates were 5.0%, 3.7%, and 1.6%. If that deceleration trend continues, it means we are essentially at a standstill right now, maybe even in decline again. And the Federal Reserve just recently used the phrase "widespread signs of a deceleration" to describe the present situation.
On the job front, the number of non-farm jobs in the economy declined in each of the last three months: June, July, and August.
There are two hypotheses, at least. One is the standard story of the government-as-savior crowd. TARP and other bailouts fixed the financial crisis and Obama's stimulus stopped the economic recession that resulted. Without either one, things would have been worse, much worse.
Here is another hypothesis. We had a recession, just like the other ten times since World War II. As in every other such case, this recession would have ended in about a year if government had done nothing in particular. But this time, the extra costs and uncertainties caused by government "fixes" in fact prolonged and deepened this recession and threatened a double dip or stalling out of economic activity.
Neither hypothesis can be "proved," since all we know is what government did and what happened. We do not know what might have happened had we done something else.
But here is my take. The times we let government do the most to "fix" a recession, meaning the Great Depression and our current Great Recession, were the very times the economy did the worst. When government let things more or less alone, the economy recovered fairly quickly and with minimal damage.
We also have the academic studies by, of all people, Christina Romer, Obama's initial chair of the Council of Economic Advisers, that say fiscal policies (e.g. government spending or "stimuli") did not get us out of the Great Depression or any of our postwar recessions.
The analogy is bleeding a patient. If the doctors bleed a patient and he gets better, they take credit. If the patient gets worse, the doctors say he was not bled enough.
Paul Krugman is the quintessential Dr. James Craik of our day. Krugman seriously believes that Japan's problem was that it was not bled enough! Enough stimuli to cause a debt of 200% of GDP, highest in the developed world, resulting in two decades of nearly nonexistent growth, and Krugman still says more bleeding needed. (Do facts ever matter to these guys?)
I think, at this point, we have enough evidence for both bleeding as a medical cure and fiscal stimulus as an economic cure that we can stop killing patients by bleeding them to death.
We have two good pieces of advice in such matters, one from Hippocrates and the other from our space program. Hippocrates said, "First, do no harm." Our space program's rule of flight control was "If you don't know what to, don't do anything."
You can live by such rules. Or you can believe Paul Krugman. How about we vote on it this November?
Randall Hoven is the creator of Graph of the Day. He can be contacted at randall.hoven@gmail.com or via his website, randallhoven.com.
|