The Political Violence of the Bible and the Koran

By Bill Warner
One of the most frequently used arguments in the defense of Islam is that the Bible is just as violent as the Koran. The logic goes like this. If the Koran is no more violent than the Bible, then why should we worry about Islam? This argument suggests that Islam is the same as Christianity and Judaism. This is false, but the analogy is very popular since it allows someone who knows nothing about the actual doctrine of Islam to talk about it. "See, Islam is like Christianity; Christians are just as violent as Muslims." If this is true, then you don't have to learn anything about the actual Islamic doctrine.
However, this is not a theological argument. It is a political one. This argument is not about what goes on in a house of worship, but what goes on the in the marketplace of ideas.
Now, is the doctrine of Islam more violent than the Koran? There is only one way to prove or disprove the comparison, and that is to measure the differences in violence in the Koran and the Bible.
The first item is to define violence. The only violence that matters to someone outside of Islam, Christianity, or Judaism is what they do to the "other," or political violence. Cain killing Abel is not political violence. Political violence is not killing a lamb for a meal or making an animal sacrifice. Note that regardless of whether a vegan or a PETA member considers both of these actions violent, neither constitutes violence against vegans or PETA members.
The next item is to compare the doctrines both quantitatively and qualitatively. The political violence of the Koran is called "fighting in Allah's cause," or jihad.
We must do more than measure the jihad in the Koran. Islam has three sacred texts: Koran, Sira, and Hadith, or the Islamic Trilogy. The Sira is Mohammed's biography. The Hadith are his traditions -- what he did and said. Sira and Hadith form the Sunna, the perfect pattern of all Islamic behavior.
The Koran is the smallest of the three books, also called the Trilogy. It is only 16% of the Trilogy text[1]. This means that the Sunna is 84% of the word content of Islam's sacred texts. This statistic alone has large implications. Most of the Islamic doctrine is about Mohammed, not Allah. The Koran says 91 different times that Mohammed's is the perfect pattern of life. It is much more important to know Mohammed than the Koran. This is very good news. It is easy to understand a biography ab 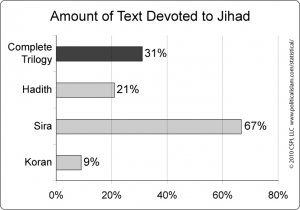 out a man. To know Islam, know Mohammed.
It turns out that jihad occurs in large proportion in all three texts. Here is a chart about the results:
It is very significant that the Sira devotes 67% of its text to jihad. Mohammed averaged an event of violence every six weeks for the last nine years of his life. Jihad was what made Mohammed successful. Here is a chart of the growth of Islam.
Basically, when Mohammed was a preacher of religion, Islam grew at the rate of ten new Muslims per year. But when he turned to jihad, Islam grew at an average rate of ten thousand per year. All the details of how to wage jihad are recorded in great detail. The Koran gives the great visi 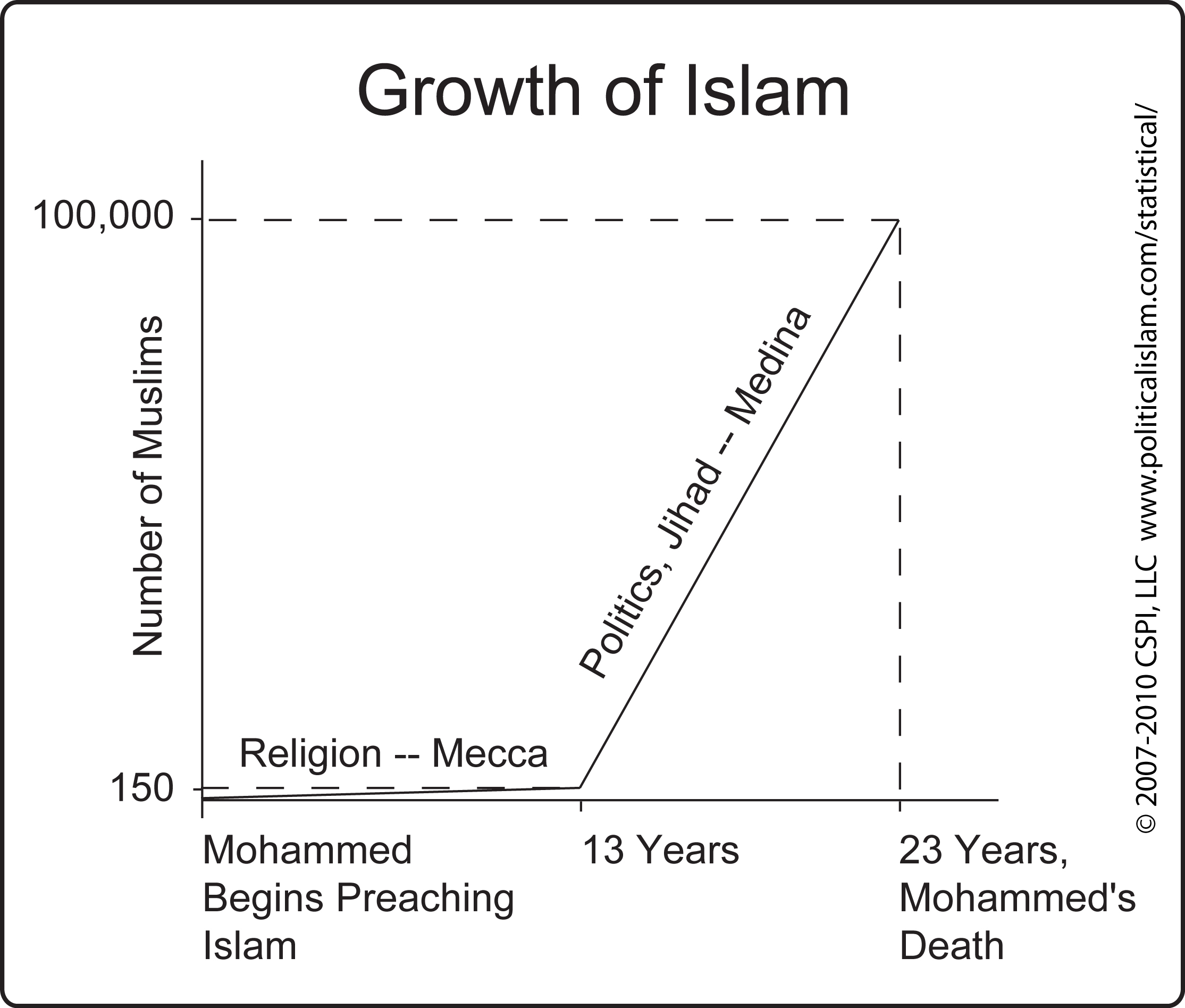 on of jihad -- world conquest by the political process. The Sira is a strategic manual, and the Hadith is a tactical manual, of jihad.
Now let's go to the Hebrew Bible. When we count all the political violence, we find that 5.6% of the text is devoted to it. There is no admonition towards political violence in the New Testament.

When we count the magnitude of words devoted to political violence, we have 327,547 words in the Trilogy[2] and 34,039 words in the Hebrew Bible[3]. The Trilogy has 9.6 times as much wordage devoted to political violence as the Hebrew Bible.
The real problem goes far beyond the quantitative measurement of ten times as much violent material; there is also the qualitative measurement. The political violence of the Koran is eternal and universal. The political violence of the Bible was for that particular historical time and place. This is the vast difference between Islam and other ideologies. The violence remains a constant threat to all non-Islamic cultures, now and into the future. Islam is not analogous to Christianity and Judaism in any practical way. Beyond the one-god doctrine, Islam is unique unto itself.
Another measurement of the difference between the violence found in the Judeo/Christian texts and that of Islam is found in the use of fear of violence against artists, critics, and intellect 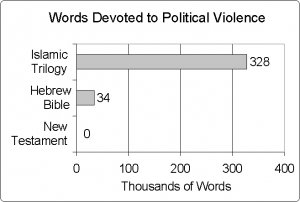 uals. What artist, critic, or intellectual ever feels a twinge of fear if condemning anything Christian or Jewish? However, look at the examples of the violent political threats against and/or murders of Salman Rushdie, Theo van Gogh, Pim Fortune, Kurt Westergaard of the Danish Mohammed cartoons, and many others. What artist, critic, or intellectual has not had a twinge of fear about Islam when it comes to free expression? The political difference in the responses to the two different doctrines is enormous. The political fruits from the two trees are as different as night and day.
It is time for so-called intellectuals to get down to the basics of judging Islam by its actual doctrine, not making lame analogies that are sophomoric assertions. Fact-based reasoning should replace fantasies that are based upon political correctness and multiculturalism.
- Bill Warner, Director of the Center for the Study of Political Islam
http://www.politicalislam.com
bw@politicalislam.com
[1] http://cspipublishing.com/statistical/TrilogyStats/The_Relative_Sizes_of_the_Trilogy_Texts.html
[2] http://cspipublishing.com/statistical/TrilogyStats/Percentage_of_Trilogy_Text_Devoted_to_Jihad.html
[3] http://cspipublishing.com/statistical/pdf/OldTestamentViolentPassages.pdf
|