Where did Barack Obama acquire the self-evident disdain he has for major corporations, especially oil companies, and for the striving classes who have made America  prosperous and strong? Many conservatives have noted Barack Obama's class envy, expressed both in his and his bride's resentment over their education debts and desire to live large in the White House, and in his intent, expressed to Joe the Plumber, to "spread the wealth around."

Obama also has made it clear that he is no believer in American exceptionalism -- that we are no more different than Greeks who think Greece is special, or Britons who think that Britain is exceptional. And his commitment of billions to the International Monetary Fund for global income redistribution without any constitutional authorization bespeaks an attitude that America owes the world a share of its wealth -- that we do not deserve the prosperity we have enjoyed. He has in the past told us that we can't have houses as warm as we want, or cars as big as we prefer. We must make do with less so that others may enjoy some of the goodies, in effect.
A few very astute observers have noted Barack Obama's immersion in the anti-colonialist ideology championed by his father, Barack Obama, Sr. On these pages, L.E. Ikenga explained in 2009 how Obama's policies resemble those of post-colonial African elites, full of resentment for the wealth allegedly drained from their societies and anxious to remake them along egalitarian lines with the state (i.e., themselves) in charge of the readjustment.
Yesterday, in a much-noted article for Forbes, Dinesh D'Souza lucidly used anti-colonialist ideology to explain some of the seemingly self-contradictory Obama policies, including the deep-water drilling ban for American companies in the waters of the Gulf of Mexico while simultaneously financing the deep-water drilling of Brazilian oil company Petrobras in the South Atlantic, off Rio de Janeiro. According to D'Souza, Obama thinks the USA consumes too many resources that other countries deserve, that we wield an unfair amount of weight in world affairs, and this explains the moves which seem aimed at diminishing the power, wealth, and stature of America. These are the very desires which led Rush Limbaugh to hope that Obama fails.
I think that Ikenga, D'Souza, and Limbaugh are all correct. Obama has a grudge against America and its success. The Marxian anti-colonialist ideology he has evidently embraced fits well with this grudge, but it does not explain where it came from. To resent and wish to diminish the power and wealth of one's native land is an extraordinary thing, indicating a deep emotional alienation. People do not usually come to such a disturbing stance for purely intellectual reasons. In many cases, life's deepest resentments are rooted in the formative years of childhood, and it is in these years of Obama's life -- specifically the ages six to ten -- in which we can find the sort of experiences that could have produced a lifelong anger toward America and its affluent classes.
It is well-known that after Barack Obama's mother Stanley Ann Dunham married her second non-American husband Lolo Soetoro, the family decamped to Jakarta, Indonesia, where Obama's stepfather worked first for the Indonesian government and later for an American company, Mobil Oil. But beyond the bare facts of Obama's schooling in a Catholic school (where he was registered as a Muslim), there is almost no reporting or commentary on Obama's experiences in Jakarta. 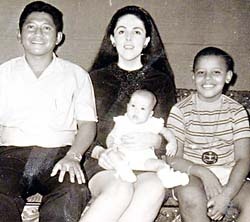 Obama stayed there from 1967-71. He was evidently so miserable that at age ten, he went back to America to take up residence with his grandparents in Honolulu, while his mother and stepsister Maya remained in Jakarta. What, aside from sheer self-centeredness or irresponsibility, could have induced his mother to fob off her son on her parents to raise, violating the strongest instinct known to womankind? Her son must have been very unhappy with his life there.
To really understand Barry Soetoro's Jakarta life, one must understand the socio-economic framework within which the family lived. Stepfather Lolo may have worked for an American oil company, but he was not an expatriate employee; he was a local hire. His mother Stanley Ann reportedly taught English, working for the United States Embassy, but also was not an expatriate member of the diplomatic corps. This fact meant that the family was embedded as lower caste members of the Jakarta expatriate American community.
Few Americans who have not been or associated with expatriates in poorer countries can grasp the immensity of the gap which separates expatriate lifestyles from those of the locals. When a company or the government sends an executive-level employee overseas for an extended time complete with family, immense resources are expended making life overseas as close as possible to that at home, no matter what the cost. Benefits include lavish housing allowances, schooling allowances, and home leave. These and other benefits place the expatriate families at the very peak of local society economically.
The Americans for whom Obama's parents worked undoubtedly enjoyed large, comfortable, air-conditioned American-style housing, paid home leave, club membershsips, and company-paid tuition at the best private schools, and most of them would have had at least one chauffeur-driven car as well as a staff of servants in the home. Meanwhile, Lolo's salary as a locally hired Indonesian at Mobil Oil, while no doubt much higher than the impoverished average of Jakarta, could pay for none of these perks. I have studied and consulted extensively on the issues of managing expatriate executives, and I would be surprised if Soetoro received even close to 10% of the total compensation of his Mobil Oil American colleagues, despite being highly educated. That would be enough to afford a bungalow, perhaps, but certainly not American-style housing or even a car, most likely.
The cute, young Soetoro kids almost certainly got invited to the Fourth of July parties at the U.S. Embassy and quite probably spent some time at the American Club of Jakarta, enjoying the pool and other sports facilities, lavish buffets, and other comforts as guests of expatriate colleagues of Lolo's. There they saw how the upper caste -- the Caucasian, affluent executive-class expatriates and their families -- lived, untroubled by the heat, the open sewers, and the unbelievable poverty of ordinary Indonesians.
Despite all the perquisites of expatriate life, many Americans sent overseas by their employers do not enjoy living away from home. Spouses and children often have a difficult time adjusting, which is one of the reasons why so much money is expended making life overseas as comfortable as possible for them. Even so, it is not uncommon for people forced to go overseas this way to develop rather bad attitudes toward the locals, feeling and openly expressing contempt for the local environment and people.
As it happens, during the years Barry Soetoro spent in Jakarta, I spent significant amounts of time living as an impecunious student in Tokyo (which was then far poorer than America, though much richer than Indonesia). On occasion, I interacted with embassy and corporate expatriates and saw both the incomparably lavish lifestyles they lived (compared to mine) and the disdain some (but by no means all) among them expressed for the locals, up to and including casual use of racial epithets. The food, comfort, and security they enjoyed was like a dream for me, utterly inaccessible and startlingly different from the lot of ordinary Japanese with whom I lived "on the local economy." I know firsthand what kind of longing and envy such an experience produces.
It is not hard to imagine that in the occasional company of oil industry expatriates and their children, young Barry Soetoro saw and heard things which made him conclude that white, corporate America was unjustly wealthy, unfair, and downright boorish. By virtue of membership in the corporate world, the executives and their children enjoyed ease and comfort beyond anything he had ever seen or could experience on his own. Meanwhile, his parents struggled both to live in Indonesian society as locals did and to (obviously unsuccessfully) make their son happy and comfortable there.
In his most formative years, the boy who became President of the United States was, in other words, subjected to humiliating, demeaning membership in a lower caste and cognizant both of the seemingly undeserved privileges of children born to high-caste expatriates and the grinding poverty of ordinary Indonesians among whom his family lived. That a deep anger and sense of unfairness would develop in such a situation seems more than likely, laying the groundwork for resentment of American power and wealth, and an embrace of anti-colonialist ideologies which undergirded a quest for political revenge, later in life.

It was not a pleasant life Barack Obama endured in Jakarta as the child Barry Soetoro. Regrettably, all Americans are now forced to share some of his pain.
Thomas Lifson is editor and publisher of American Thinker. Earlier in life, he was a professor at Harvard Business School, researching global corporations.
|