Warning: mysqli_free_result() expects parameter 1 to be mysqli_result, bool given in /var/www/html/americanthinker/admin/common/functions/func.general.php on line 126
 Off with O'Donnell's Head: Left Targets Conservative Women - American Thinker
|

Here is the Left's latest attempt to fire up their base to vote in November: Obama Lies Productions in association with Media Sycophants Group and Black Civil Rights Mafia Productions proudly releases "Attack of the Racist White Tea Party People," starring that lovable crazy witch from Delaware, Christine O'Donnell -- in 3D. Keep the kids at home on this one, folks. It gets pretty scary when Christine's head does a 360-degree turn and pukes green slime at the audience.

Yes, the Left, so-called champions of women's causes, have launched yet another campaign to destroy another conservative woman, Christine O'Donnell. Their blatant hypocrisy and hatred of conservative women are boldly on display.
The liberal media and weird-thinking women on the Left accuse conservative women of being extremist and outside the mainstream. And yet, they are the ones who are anti-marriage, consider child-rearing demeaning, seek to feminize men, and are pro-abortion. Rush Limbaugh says the Left's version of feminism is a religion, and their sacrament is abortion.
Nutty feminist professor Andrea Dworkin said all heterosexual sex is rape. Feminist commentator Maureen Dowd writes that men, especially white men, suck. Then Dowd wrote a column about her difficulty finding a date.
Men like conservative women because conservative women like men. They are grateful when we open doors, carry packages, and take care of them. Such respectful behavior makes them feel like women and us guys feel like men. This biology-driven relationship between the sexes in no way undermines women's role as leaders, bosses, governors, or presidents. Conservative women are wise, well aware of the God-given power of their femininity.
Back in the sixties, bitter liberal women sold their sisters a huge lie: that empowerment means being like men. Unfortunately, many young men treat women as the feminists have instructed -- without respect, no special concessions, and saying anything in front of them. Young males' lack of respect for women is evidenced in the numerous music videos which refer to them as "b----s and hoes."
The Left sold their feminist movement to America as being about giving women options and freedom to choose their path. If this truly was their mission, Sarah Palin would be their rock star -- a strong, confident woman who is extremely successful in- and outside the home. But rather than celebrate Palin's achievements, feminists despise her. Why? Because it ain't about freedom, nor options. The Left's version of the feminist movement is about bitterness towards men, hatred of America, and promoting a socialist agenda.
I don't know who the Left despises more -- successful, uppity black escapees from the liberal plantation or conservative women.
Conservative brothers, despite what wacko feminists and their metrosexual media sycophants say, managed testosterone is a good thing. My testosterone will not allow me to passively watch the Left brutally beat up conservative women. The cowboy in me proclaims, "Don't be messin' with our conservative women folk" -- Christine O'Donnell, Sharron Angle, Marsha Blackburn, Michele Bachmann, Laura Ingraham, Frances Rice, Star Parker, Ann Coulter, Michele Malkin, Amy Kremer, Debbie Lee, Selena Owens, and Sarah Palin, to name a few. 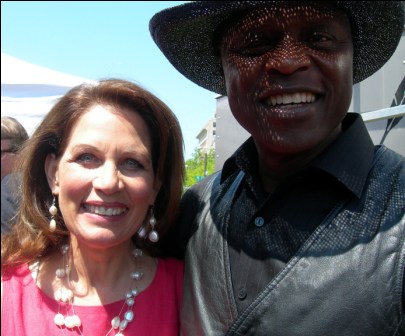 Guys, we need to rally around our awesome, gutsy sisters. They are putting it on the line, defending the values and principles we hold dear: family, God, and country.
Democrat Judgment Day in November is fast approaching. Democrats are fearful, panicky, and desperate, which makes them extremely vicious and dangerous. King Obama has sent out his decree: "Bring me the head of Christine O'Donnell!" O'Donnell must be destroyed because she is the ultimate, birthed from the people, ordinary, and yet extraordinary, conservative Tea Party Movement candidate.
It is extremely crucial that O'Donnell and we, her supporters, keep our eyes fixed on the summit and keep climbing towards it, ignoring the rocky path along the way. Go Christine, go! We got your back!
And to all of our courageous conservative sisters, we love you, and you are beautiful. Enjoy my tribute song to conservative women, titled "Our Girls."
Lloyd Marcus, Proud Unhyphenated American
Spokesperson/Entertainer of Tea Party Movement & Tea Party Express.
The American Tea Party Anthem CD/album.
Confessions of a Black Conservative, foreword by Michelle Malkin.
President, NAACPC (National Association for the Advancement of Conservative People of ALL Colors).
Join Lloyd Marcus Facebook Page.
|