By Andrew Foy, MD
President Obama is showing signs that he, along with most of the rest of the country, is losing faith in liberal economic theory. Now I'm not suggesting he's going to go all Milton Friedman on us, but I think it is appropriate to reflect on a comment he made at his September 10 press conference and take a moment to rejoice in small victories.
The following question was asked to the president: "On the economy, could you discuss your efforts at reviewing history as it relates to the poverty agenda, meaning LBJ and Dr. King?"
The President's reply about knocked me off my chair.

Did he just say "virtuous cycle"?
Yes he certainly did and a chill almost went up my leg, as I could sense the presence of Adam Smith behind the president reiterating his famous passage from The Wealth of Nations.

By directing that industry in such a manner as its produce may be of the greatest value, [man] intends only his own gain, and he is in this, as in many other cases, led by an invisible hand to promote an end which was no part of his intention ... By pursuing his own interest he frequently promotes that of the society more effectually than when he really intends to promote it.

It was as if Smith's own invisible hand was on the president's shoulder to guide him and provide reassurance that "yes, it will be okay, your base will not abandon you. The left-wing media will probably ignore this comment anyway. So just go ahead and say it."
Why exactly is the president's comment so striking? Because by admitting that economic growth or GDP growth is the most important factor in pulling individuals out of poverty, the president highlights the misguided nature of liberal economic policy over the last century. The data on this issue is relatively clear: big government is associated with lower levels of economic growth. Therefore, modern liberal theorists have made careers out of explaining why economic growth or GDP growth is not a good indicator to represent how well society functions, especially for the poorest citizens. To admit otherwise would force them to abandon their big government agenda. Well, the president just took the proverbial sledgehammer to their belief system.
Still, the president has a long way to go. While admitting that economic growth is the most important factor to pull individuals out of poverty, he has shown no signs that he actually grasps the concept of how economies grow. Therefore, it is appropriate to review the data on the size of government that optimizes economic growth otherwise known as "the optimum government theory."
Optimum government theory explains how the size and scope of government have important effects on economic growth and prosperity. In a study prepared for the Joint Economic Committee, Professors Richard Vedder and Lowell Gallaway explained Optimum Government theory as follows:

The most basic function of government is the protection of people and property. This is the necessary foundation for the efficient operation of a market economy. In addition, the governmental provision of a certain limited set of public works including a stable currency, standard weights and measures, and support of roads, canals, harbors, railways, and postal and other communications services that the private sector could not profitably provide enhances economic growth. However, as governments move beyond these core functions, they adversely affect economic growth due to multiple mechanisms that include:

The bottom line is that beyond an optimum level necessary for protecting people and property, government spending undermines economic growth by displacing private-sector activity. Unlike the private sector, which rewards productivity, the public sector is mired in inefficiency and bogged down in the corruption of the political process.
The following figure depicts the relationship between government size and economic growth and is referred to as the Armey Curve after professional economist and Republican politician Dick Armey.
Figure 1. The Armey Curve. 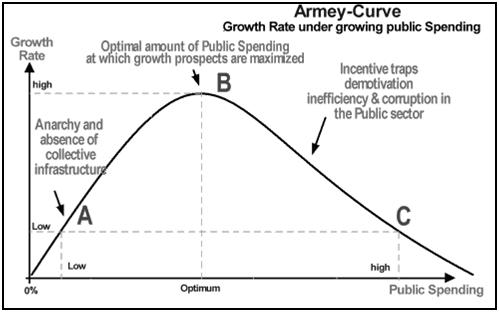 Professors Richard Vedder and Lowell Gallaway examined the relationship between the five-year economic growth rate and government spending in the United States. The authors found with 99% certainty that over the time period 1796 to 1996, the total size of government (federal, state, and local) associated with the optimum level of economic growth was 22.48% of GDP. According to the authors, "$80 billion in federal spending [beyond the optimum level] has associated with it an output-reducing impact of about $34 billion."
Many studies have been performed around the world in a variety of countries that validate the conclusions from this study. It is safe to say that the optimum size of government is between 20-25% of GDP. This data does not allow us to make any statements regarding which government programs in particular have positive or negative impacts on economic growth; however, it provides strong proof that beyond a certain level, government size negatively impacts economic growth.
In the United States, government spending is almost 45% of GDP and has risen steadily over the last half of the 20th century, with a sharp uptick since President Obama took office.
Figure 2: Government spending in US from FY 1950 to FY 2010.

So getting back to the president's epiphany, how best can he stimulate economic growth? The answer is relatively simple -- decrease the size of government. But he gives no indication that he is interested in taking that route, instead favoring policies that tinker around the edges of supply-side economics like short-term tax cuts and targeted subsidies for small businesses, which is why I say he still hasn't grasped the concept of how economies grow. In fairness to the president, the Republicans haven't shown any particular brilliance in this area either, as tax cuts are not the same as government spending cuts.
There is only one politician who seems to really get it and is willing to stick his neck out, and that is Wisconsin congressman Paul Ryan. Ryan's Roadmap for America's Future takes bold steps to reduce government spending over the long term by reforming structural entitlements in a meaningful way. Of course, Ryan's solutions won't be easy to implement, and they certainly won't be immediately popular, which is why the majority of Republicans aren't willing to embrace his plan, but perhaps President Obama, since coming to Jesus or Adam Smith or whoever, still might. That's hope and change I can believe in.
Andrew Foy is a third-year internal medicine resident who will be starting his cardiology fellowship next summer. He will be featured in Jonah Goldberg's new book Proud to be Right: Voices of the Next Conservative Generation, coming out October 5, 2010 from HarperCollins LLC. His new book You've Got to Stand for Something: Restoring America's Founding Principles will be available on September 30, 2010. To learn more about the book, visit www.standupnow.net.
|