Warning: mysqli_free_result() expects parameter 1 to be mysqli_result, bool given in /var/www/html/americanthinker/admin/common/functions/func.general.php on line 126
 Ramblings About Race - American Thinker
|

By Lloyd Marcus
Years ago, I visited the home of a fellow black friend. He talked about the "white people" on his job. It struck me that despite years of working with these people, company picnics and sharing birthday cakes in the office, my friend did not relate to his coworkers as Bob, Joe, or Jane. They were monolithically "white people."
I'm sure some whites relate to blacks the same way, as a monolithic group rather than individual fellow human beings. Without question, America has zero tolerance for "white racism," while "black racism" is given a pass.
Some whites even believe blacks should be racist. White liberal activist Janeane Garofalo says blacks who do not resent America are suffering from Stockholm Syndrome. A white neighbor was stunned when I told him I was not voting for Barack Obama. He said, "You're black. He is black. I don't get it. What is wrong with you?"
Black and white associates, family, and friends were highly offended that I would consider the character, principles, and associations of the person requesting to be elected leader of my beloved country. It was weird enough that I, a black, openly express love for America, but I actually expected the first African-American presidential candidate to go through the usual vetting process. Clearly, in their minds, Obama's skin color trumped everything.
Eighteen months later, America is suffering the consequences of white guilt and black resentment-inspired racism. Bottom line: Racism is wrong and evil regardless of who does it.
The Obama administration and their liberal mainstream media minions are despicably exploiting race to further Obama's progressive/socialist agenda. Any and all criticism of America's first black president is attacked as racist. Consequently, Americans are more polarized and divided along racial lines than ever.
I stopped in a fast food restaurant recently. About fifteen white seniors were seated, having lunch. A few were passionately expressing their displeasure with Obama's policies. When I, a black man, sat at a table nearby, the group looked uncomfortable, and their passionate discussion abruptly ended. They obviously did not notice my "Tea Party Express" t-shirt. I was tempted to say, "Don't stop because of me -- I agree with you!"
Similar scenarios are happening across America. Criticizing the black president brands you a racist. Folks, there is something seriously wrong in our country when citizens are fearful of criticizing our president. Remarkably unpresidential, Obama uses his surrogates in the liberal mainstream media to recklessly wield their bloodstained sword of racism accusations to slash and terrorize all who dare criticize his socialist agenda.
The stakes are far too high to continue allowing Obama and company to play the 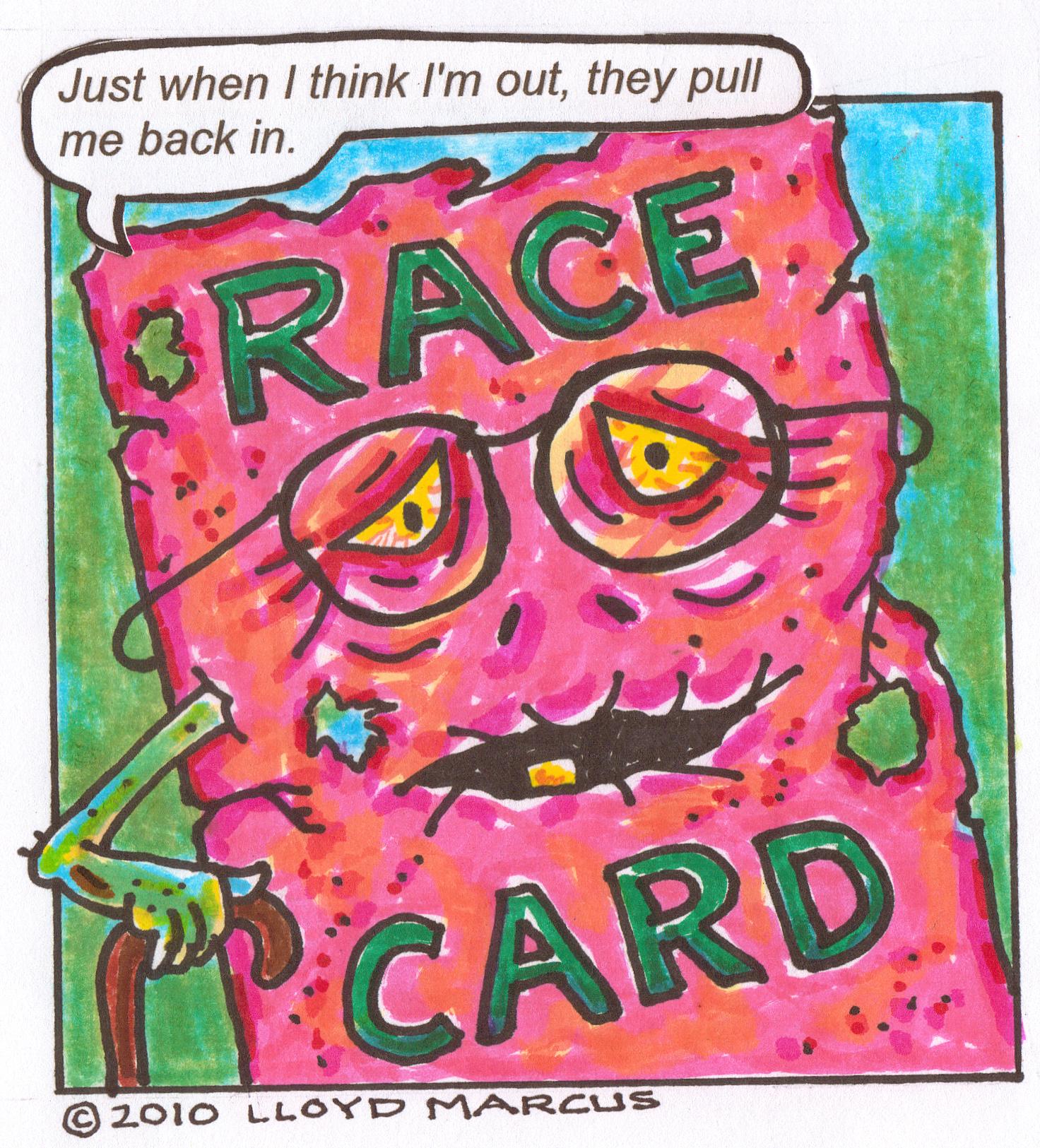 should-have-been-retired-years-ago race card to shut people up, trumping logic, reason, and common sense. America and the future of our children are at risk.
Our Founding Fathers and patriots before us, such as the brave young men at Normandy, confirm that freedom is worth fighting for -- and yes, even worth paying the ultimate sacrifice for. In light of what these patriots gave for America, the sting of being called a "racist" is nothing.
Our Tea Party movement is badgered by liberal blacks and the liberal mainstream media: "What are you doing to attract blacks?"
Well, what the heck does that mean? Should tea parties serve fried chicken to attract blacks (or cannoli to attract Italians)?
The Tea Party movement will attract kindred-spirit, right-thinking Americans of all races by touting and standing up for conservative values and principles. Similar to the famous line in the movie, "If we say it, they will come."
For America to move forward, it is crucial that we cease falling prey to the divisive tactic of "pandering to groups." Identity politics must end in America. Characterless politicians such as Obama have been skillfully pitting groups against each other, dividing and conquering us, for years: blacks vs. whites, rich vs. poor, legal vs. illegal, and achievers vs. non-achievers.
Why do you think liberal politicians created hyphenated Americans, and why are they so vehemently outraged whenever anyone dares to challenge the politically correct practice? Hyphenating is crucial to dividing Americans into various, monolithic, victimized voting blocks.
My signature opening line on stage at tea parties has sparked over-the-top, angry, vitriolic responses from liberals. Their insane rage and anger comes from hearing me say, Hello my fellow patriots. I am not an African-American. I am Lloyd Marcus, AMERICAN!"
Meanwhile, this same proclamation has won me love, respect, and admiration from millions.
Thirty years ago, I attended an AA meeting. I have been sober over thirty years. At that meeting, an elderly white woman told the group about her fears and insecurities, which contributed to her alcohol abuse. I was shocked that an elderly white woman and I shared similar feelings. This incident taught me that certain feelings go beyond race, age, and gender. It is called being human.
And yet, while claiming to desire unity, shameless politicians continue to divide us by playing the old and tattered race card. I cannot relate to a black, Hispanic, or whoever agenda. We are all human beings desiring the best for our families, loved ones, and country. Brothers and sisters, that is the true American agenda.
- Lloyd Marcus, Proud Unhyphenated American