Warning: mysqli_free_result() expects parameter 1 to be mysqli_result, bool given in /var/www/html/americanthinker/admin/common/functions/func.general.php on line 126
 Excusing Islam for the Fort Hood Massacre - American Thinker
|

"The function of wisdom is to discriminate between good and evil."
- Cicero

On 5 November 2009, Major Nidal Malik Hasan, a U.S. Army psychiatrist and devout Muslim, opened fire on his fellow soldiers at Fort Hood, TX, killing thirteen and wounding 32. As he fired, he shouted "Allahu Akbar," which means "God is Great," an Islamic declaration of faith.
On 10 August 2010, the Department of Defense (DoD) released 23 pages of recommendations from an independent review of the Fort Hood massacre. It is not as pure a whitewash as the first Fort Hood report, called "Protecting the Force." It actually has some relevant recommendations. However, it so assiduously avoids the central issue that it becomes a masterpiece of political correctness.
Here is a sample: 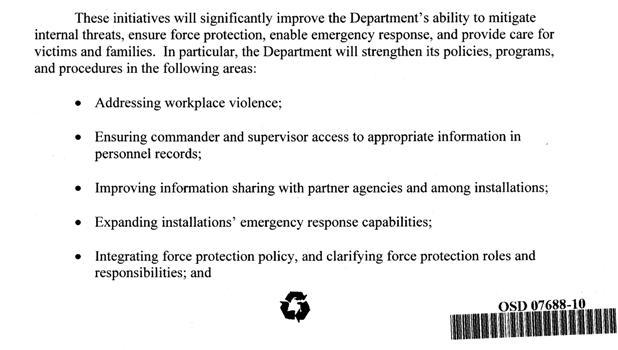 There is not a single mention of Islam, Islamic radicalization, jihad, jihadists, or religious extremism in the entire document. Nor is there any other word or phrase that would indicate to the reader that Hasan was anything other than a mentally disturbed murderer. The writers describe "self radicalization" and "religious practices" in the vaguest way under recommendation 2.7:

The independent Review found that DoD policy regarding religious accommodation lacks the clarity necessary to help commanders distinguish appropriate religious practices from those that might indicate a potential for violence and self radicalization.

So Hasan was "self-radicalized." Certainly, murdering your fellow soldiers could be considered an inappropriate "religious practice."
In a slick sleight of hand, the DoD absolves the belief system that spawned the violence of any responsibility. For those who have the courage to embrace it, the truth of Islamic belligerence is frightening -- not only for what it is, but for what it means if we fail to confront it.
Islam inevitably brings violence because jihad is its soul. The evidence is clear, compelling, and overwhelming. If we hope to meet the ever-growing threat from Islam, we must acknowledge that truth. As more Islamic countries become nuclear powers, it is just a matter of time until they flex that nuclear muscle. Inside a decade, we may well be fighting for our very existence against a totalitarian ideology so controlling and so rigid that it makes communism look benign.
Major Hasan was a dedicated adherent to that ideology. He felt justified in his actions, even righteous, but then, his instructions were very clear:

Quran 8:7 Allah wished to confirm the truth by His words: "Wipe the infidels out to the last."

Hasan followed those words.
Words like these abound in the Quran. Our soldiers were butchered by one of their own officers, murdered in cold blood. They were unarmed and helpless, but not sinless according to Islam. They were unbelievers, subhuman.
Anwar Al-Awlaki, who preached to Major Hasan and his family at the Dar al Hijrah Islamic Center in Falls Church, VA, has nothing but praise for him.
"Nidal Hasan is a hero. He is a man of conscience who could not bear living the contradiction of being a Muslim and serving in an army that is fighting against his own people," Awlaki wrote. "This is a contradiction that many Muslims brush aside and just pretend that it doesn't exist. Any decent Muslim cannot live, understanding properly his duties towards his Creator and his fellow Muslims, and yet serve as a U.S. soldier." Al-Awlaki goes on to say Muslim soldiers in the U.S. Military should follow Hasan's example.
America has learned much about Islam during the last bloody decade. The horrors of 9-11-2001 delighted a large majority of the Muslim world. They still inspire hundreds of millions, whose central religious motivation, as clearly commanded in the Quran, is religious conquest. If not by the sword, then by subterfuge, the quest for absolute dominion underlines everything. All treaties and agreements are temporary. All tolerance of non-Muslims is an unpleasant necessity, a means by which to achieve the holy purpose of an Islamic world. Dialogue is a tactic, disinformation about Islamic dogma a tool, to fool the credulous and establish Islamic preeminence, to get a foot in the door, to take root in the national dialogue, to establish legitimacy.
We are told endlessly that Islam is a "Religion of Peace" in the face of overwhelming evidence to the contrary. After a decade of the violent reality of Islam, the claim is so absurd that it becomes a parody of delusional political correctness. It borders on collective insanity. The proposed mosque and "Islamic Center" near Ground Zero is a case in point. Parroting the White House backdoor talking points, leftist publications from Slate to the New York Times tell us that opposing the Ground Zero mosque is racist and bigoted. It is a version of the same tired rhetoric used to promote racial exceptionalism and "social justice." Americans are mightily sick of it.
What evidence makes us wary of Islamic promises of dialogue? Perhaps 15,000 terror attacks since 9-11 against Muslims and non-Muslims alike -- vicious, indiscriminate, brutal attacks meant to terrify and horrify. No other religious faith is guilty of so many atrocities against so many innocents in so many disparate lands.
For the faithful, denying jihad is apostasy. The commands of the Quran are not metaphors. Muslims take them very seriously. Take the time to read their holy book. This is what they believe.

Quran 8:39 So, fight them till all opposition ends and the only religion is Islam.
Quran 5:51 O you who believe! Take not the Jews and Christians for friends.  They are friends one to another. He among you who taketh them for friends is one of them. Lo Allah guideth not wrongdoing folk.
Quran 8:7 Allah wished to confirm the truth by His words: "Wipe the infidels out to the last."
Quran 8:12 I shall terrorize the infidels. So wound their bodies and incapacitate them because they oppose Allah and His Apostle.
Ishaq 369 (From the Hadeeth [oral tradition]): Thereupon Mas'ud leapt upon Sunayna, one of the Jewish merchants with whom his family had social and commercial relations and killed him. The Muslim's brother complained, saying, "Why did you kill him? You have much fat in your belly from his charity." Mas'ud answered, "By Allah, had Muhammad ordered me to murder you, my brother, I would have cut off your head." Wherein the brother said, "Any religion that can bring you to this is indeed wonderful!"

Major Hasan acted on what he read in the Quran and the teachings he absorbed in his mosque. For the Department of Defense to pretend otherwise is an act of politically correct delusion.
The First Amendment to the U.S. Constitution does not require that we ignore the mores of our civilization to appease Islam. We do not have to accept a religious system that has within it the justification for misogyny, violence, and murder. Nothing short of national conversion will appease Islam or spare us the conflict that is coming. If we ignore the evils that Islam brings, how then can we ensure that our freedoms remain alive for our children?
|