Warning: mysqli_free_result() expects parameter 1 to be mysqli_result, bool given in /var/www/html/americanthinker/admin/common/functions/func.general.php on line 126
 Democrats Drove President Obama's Car into the Ditch - American Thinker
|

By Morgan Philpot
President Obama and the Democrats have a new favorite campaign and press talking points metaphor that compares the American economy to a car that Republicans supposedly drove into a ditch. Not only did the GOP drive the car into the ditch, the Democrats say, but they have also left all the heavy lifting to the president, Harry Reid, and Nancy Pelosi. There is one major flaw with this new favorite metaphor; it was actually Democrats who were driving when the car (America's economy) went into the ditch. 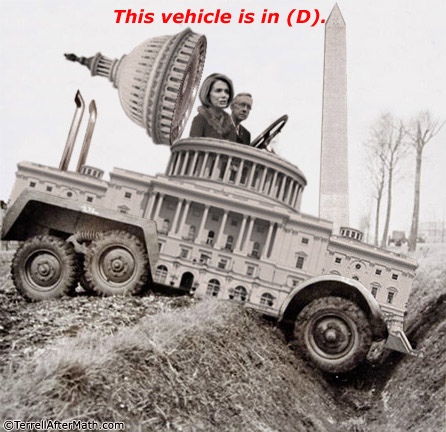 Illustration by Richard Terrell
The 2006 election cycle was a disaster for Republicans. The economy was robust, federal spending growth was beginning to decline, and the stock market was humming. But Americans were growing tired of the war in Iraq, and they were fed up with the scandals and broken promises of a party that had sold itself to the American public as the party of fiscal responsibility and family values.

Republicans still held the White House, but in January 2007, Harry Reid and Nancy Pelosi took over the show in Washington. The shift in power was hailed as a mandate on the direction the country had been heading under a Republican-controlled Congress and White House. Time Magazine went so far as to argue that the election results represented the "end to the Republican Revolution."

After four years in the driver's seat, a close examination of the numbers and timeline paint a much different picture from the President's metaphoric masterpiece.

According to the Bureau of Labor statistics, the unemployment rate sat at 4.6 percent back in January of 2007, the same month Democrats took control of the House and Senate. Three and a half years later, unemployment hovers around 9.5 percent, a total of eight million jobs have been lost, and under-employment is at a record high.

From 2002-2007, Republican-authored budgets grew an average of 6.6 percent on a year-over-year basis. This is not a number Republicans should be remotely proud of, because pork spending was one of the reasons that (low unemployment notwithstanding in 2006) Americans threw Republicans out on their backsides that November.

But with the help of newly elected and entrenched "fiscally conservative" Democrats, Nancy Pelosi and Harry Reid took those spending levels from an average of 6.6 percent to 11 percent year-over-year growth. Spending is now so out of control that for the first time in forty years, Congress has refused to put forward a budget for FY2011. So not only were the Democrats driving the car into the ditch, but it also appears that Reid and Pelosi pushed down the accelerator as they went into the ditch.

At the end of President Clinton's final term in 2000, the U.S. economy was heading into a recession. A year later, the 9/11 terrorist attacks hit. On September 30, 2001, the Dow Jones Industrial Average (DJIA) bottomed out at 7,528. Over the next six years, the DJIA soared, reaching 12,653 by the end of January 2007, the same month Democrats retook control of Congress. Eighteen months later, the stock market was in a free-fall that destroyed the retirement and personal wealth of millions of Americans.

Housing Market
In 2006, the housing market was still humming, with single-family housing starts totaling more than 1.4 million. As Democrats assumed control of the House and Senate in early 2007, the housing market was beginning to show some signs of weakness, but for nearly eighteen months, the Democrat leadership did nothing. Calls for reform of Freddie Mac and Fannie Mae and their risky lending practices, previously obstructed under the Republican majority during the first half of the decade, were simply ignored under Pelosi's and Reid's leadership. And when the housing bubble finally burst in 2008, the drivers of the car, Pelosi and Reid, began pointing at the passengers.

Unfortunately, the Blame Bush Game has done little to provide real relief for the beleaguered housing market. Last year, housing starts totaled less than 500,000, and they are projected to rise slightly to approximately 549,000 this year, but this number is lower than previous forecasts anticipated, as the economy appears headed for a double dip recession.

Deficits
Last but not least is the direction of deficit spending. Fiscal year 2007, which was the last budget proposed by and passed by the Republican-controlled House and Senate, helped close the deficit gap to a net deficit of $162 billion. Again, this is not a number to be proud of, but it shows that Republicans were well on their way to returning America to budget surpluses before Democrats took control of Congress in January of 2007.

Since that change in power, deficits have skyrocketed. Declining revenues have played a part, to be sure, but more than one trillion in spending on a variety of stimulus packages (most recently, $26 billion for state and local government employees), the bank bailouts, and the passage of what will be the largest entitlement program in U.S. history make up the bulk of the more than $1.5-trillion deficit the U.S. is projected to see this year. That translates into nearly $0.41 of every dollar of federal spending -- money we do not really have.

The Buck Stops Here
At the end of the day, President Obama can complain all he wants about the ditch the car is in and do his best spin to pin the blame on President Bush, but the sad reality he must face is that he and his congressional counterparts, Harry Reid and Nancy Pelosi, pushed the gas pedal and steered the car into the ditch.
With nearly 86 percent of Congress up for reelection this November, voters have the ability to change the direction of America overnight and elect leaders who are willing, like Harry Truman, to say, "The buck stops here."

The question remains: will voters see past the Democratic spin of the Bush Blame Game and elect differently this November, or will America be subject to another two years of Obama, Pelosi, and Reid ditch-digging?

Morgan Philpot is an attorney and the current Republican candidate for U.S. Congress in Utah's 2nd Congressional District.
|