Warning: mysqli_free_result() expects parameter 1 to be mysqli_result, bool given in /var/www/html/americanthinker/admin/common/functions/func.general.php on line 126
 We the Serfs - American Thinker
|

The Constitution of the United States of America under President Barak Obama is being transformed from a nation of "We the People" to "We the Serfs."

If we look at the flow of rights from a historical perspective, it would look something like a pyramid, with the king at the top and the serfs at the bottom. 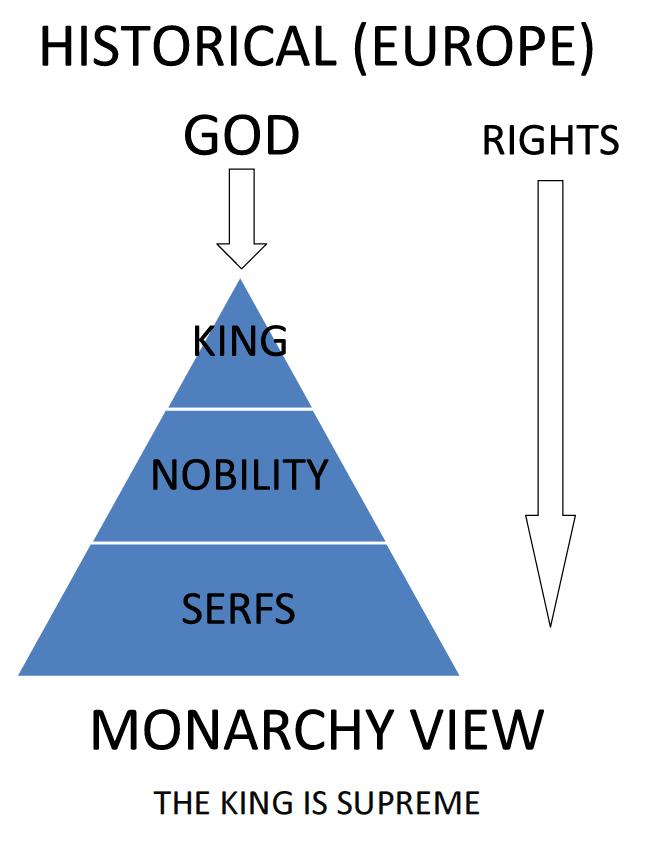 All of the rights came from God. God delivered all of the rights and property into the hands of the king.  The king was the owner of all of the land in his realm. Based on their loyalty and prowess in battle, the nobility would earn from the king titles and lands. The serfs worked the land for the nobility, and the nobility let the serfs keep a portion of what they produced for themselves. The remainder was paid to the nobility in tribute. The nobility then passed part of the production of the serfs back to the king. Rights flowed from the king to the nobility and then down to the serfs, who had virtually no rights and certainly no property.
The founding fathers knew that rights flowed from God to individuals, not the king. These are natural rights. The founders inverted the pyramid to look like the following. 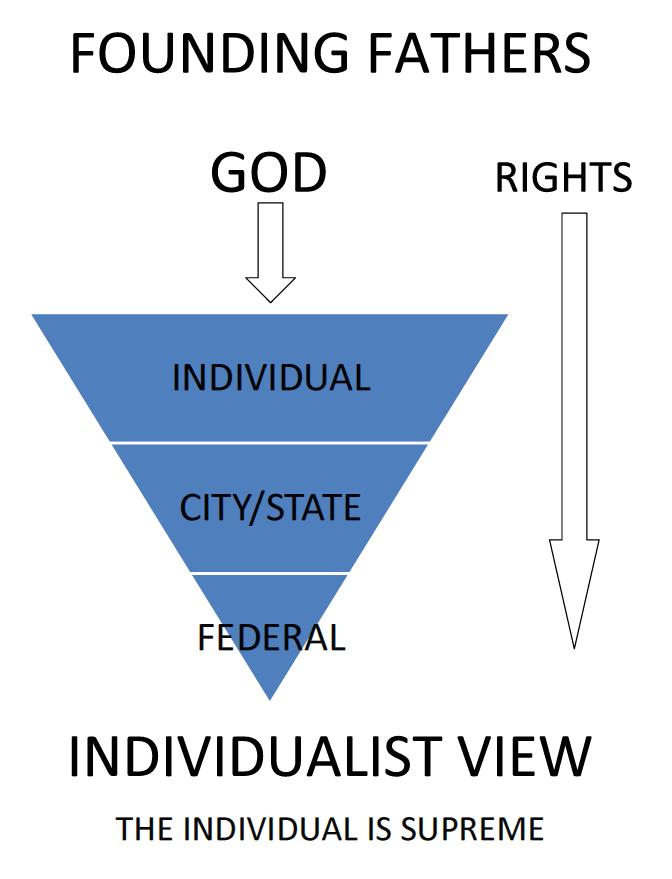 The founding fathers looked to the writings of John Locke and others. Locke's Second Treatise of Government, Concerning the True Original Extent and End of Civil Government, states:

The state of nature has a law of nature to govern it, which obliges every one: and reason, which is that law, teaches all mankind, who will but consult it, that being all equal and independent, no one ought to harm another in his life, health, liberty, or possessions: for men being all the workmanship of one omnipotent, and infinitely wise maker[.]

This foreshadows the most famous line in the Declaration of Independence.

We hold these truths to be self-evident, that all men are created equal, that they are endowed by their Creator with certain unalienable Rights, that among these are Life, Liberty and the pursuit of Happiness.

To secure these rights, individuals formed larger groups to protect these rights. The collection of individuals became towns, then states, and ultimately a nation. The founding fathers designed a Constitution in which the individual is supreme.
Modern-day progressives, now known as liberals, have come to dominate the current Democratic Party. President Obama seeks to flip the pyramid back to the historical perspective. 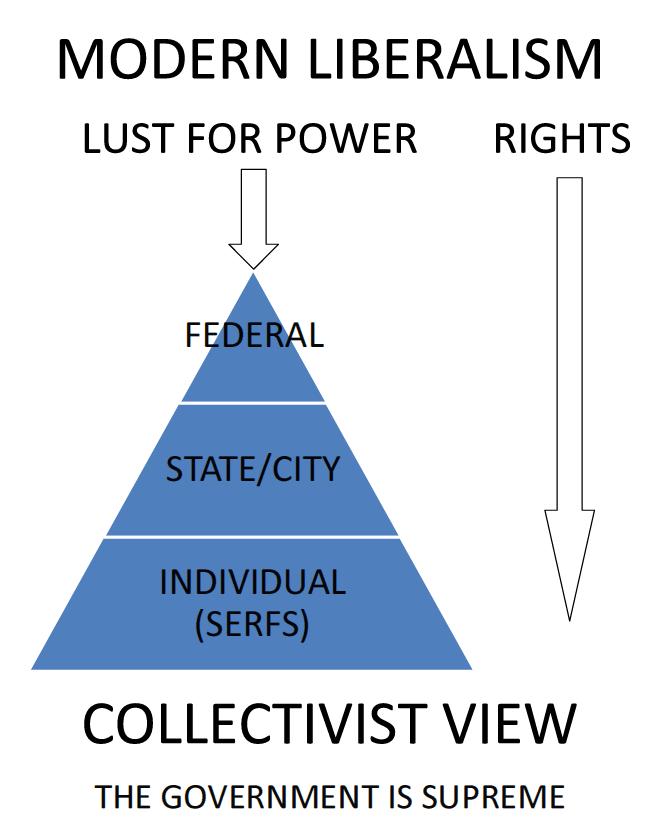 Under this administration, we have seen government takeover of large companies, the implementation of a pay czar to determine compensation in private companies, a health care insurance mandate where you will be forced to purchase insurance or have the IRS withholding your refund or garnishing your wages, cap-and-trade legislation, and the EPA regulation of carbon, which will determine where we can set our thermostats in our own homes.
The Obama administration has managed to move us back in time to the medieval days, where the king reigned supreme, and the fruits of the serfs' (taxpayers, producers in society, the middle class, entrepreneurs, etc.) labor belong to the government, who determine how much we shall keep.
Frederick Bastiat wrote The Law in 1850 at the time of the French Revolution. His deductions are as relevant today as they were at that time. Our life -- physical, intellectual, and moral life -- is a gift from God. Man can live and satisfy his wants only by ceaseless labor. Every day I work, a day of my life is used up, never to return. The compensation that I am paid in exchange for that day's labor is equivalent to that piece of my life that is now gone. If I have a right to life, then I have a right to that compensation which I have exchanged for a portion of my life. This process is the origin of property. But man may also live and satisfy his wants by seizing and consuming the product of the labor of others. This process is the origin of plunder. Since man is naturally inclined to avoid pain, it follows that men will resort to plunder whenever plunder is easier than work.
The proper purpose of law is to use the power of its collective force to stop this tendency to plunder instead of work. The law should protect property and punish plunder. The law, whether made by one man or one group of men, operates with the sanction and support of a dominating force, and this force must be entrusted to those who make the laws. Legal plunder occurs when the law takes from one person and gives to another. The law benefits one citizen at the expense of another by doing what the citizen himself cannot do without committing a crime. If such a law is not abolished, it will spread, multiply, and develop into a system.
As Frederick Bastiat noted in The Law,

But it is upon the law that socialism itself relies. Socialists desire to practice legal plunder, not illegal plunder. Socialists, like all other monopolists, desire to make the law their own weapon. And when once the law is on the side of socialism, how can it be used against socialism? For when plunder is abetted by the law, it does not fear your courts, your gendarmes, and your prisons. Rather, it may call upon them for help.

When law and force keep a person within the bounds of justice, they impose nothing but a mere negation. They oblige him only to abstain from harming others. They do not violate his life, his liberty, or his property. They safeguard all of these. They are defensive; they defend equally the rights of all. The Constitution lists negative rights.
But when the law imposes upon men a requirement to work, then the law is no longer negative; it acts positively upon people. It substitutes the will of the legislator for the individual's own will. When this happens, the people lose their life, their liberty, and their property.
The government does not get any money for the benefit of one group unless another group has been forced to give it to the government. The law can be an instrument of equalization only as it takes from some persons and gives to other persons. When the law does this, it is an instrument of plunder. With this in mind, consider the protective tariffs, subsidies, guaranteed profits, guaranteed jobs, relief and welfare schemes, public education, progressive taxation, free credit, and public works. You will find that they are always based on legal plunder, organized injustice. This is what President Obama calls positive rights that he finds in the Constitution.
It seems that Frederick Bastiat had the modern-day liberals pegged 160 years ago.
John Lilly, MBA, D.O. is a family physician and president of The Y.O.U.N.G. Conservatives of America and can be reached at drjohnlilly.com or tycoa.com. Contribution by Colin McCord.
|