The Left's Psychological Assault on Independence

By Andrew Foy, MD
The United States faces overwhelming fiscal problems. Our current level of government spending and future entitlement obligations are simply unsustainable. However, as concerning as these fiscal matters are, the biggest problem America faces has nothing to do with economics, but rather psychology.
The strength of a nation reflects the character of its citizens. While America was once considered a nation of individuals fiercely independent and self-reliant, her citizens are moving closer to a state of dependence, characterized by irresponsibility and ambivalence. This change has been instigated by the politics of collectivism and the growth of the social welfare state.
F.A. Hayek, the famous Austrian-born economist and political philosopher, warned of the dangers of excessive government.

The most important change which extensive government control produces is a psychological change, an alteration in the character of the people.

To understand how this alteration occurs, one must first understand the psychological concept known as locus of control. In 1954, American psychologist Julian Rotter introduced the concept that describes how individuals could be divided into two basic groups, which represent two ends of a continuum (Figure 1): internals believe that their locus of control is within themselves, and externals believe that they are under the control of outside forces.
Figure 1: Locus of Control Continuum. 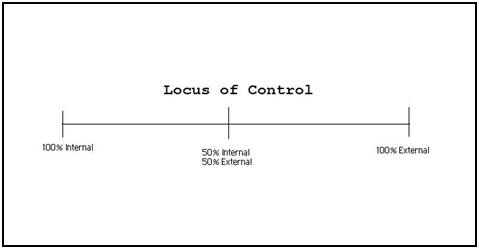 According to Lee Harris, author of The Next American Civil War:

[Internals] believe that they are the masters of their own destiny; they tend to be high-achievers, optimistic about their ability to improve their lot, and to discard bad habits. They believe in willpower and positive thinking. They are determined to control their own lives, for better or worse. [Externals] look on themselves as victims of circumstances, the playthings of fate. If they go to bed drunk, light up a cigarette, and burn their house down, they explain the disaster as another instance of their bad luck, and not their poor judgment, much less their bad habits.

Based on Harris's description, it is simple to understand why having an internal locus of control is desirable, while having an external locus is not. Furthermore, individuals can move along the continuum in response to external factors. American psychologist Martin Seligman's experiments provided an explanation for why and how movement occurs along the continuum.
Seligman exposed various lab animals, such as dogs, to painful stimuli. Some of the dogs could escape the pain by pressing against a button; others could press the button but receive no pain relief. The dogs with the opportunity to control the painful stimuli suffered no adverse long-term effects, whereas the dogs with no control over the painful stimuli simply gave up trying to control their situation, and afterward suffered from clinical depression.
Seligman then used the same dogs and subjected them to different environments. He found that the dogs who were not able to control the painful stimuli in the first experiment and thus gave up trying, continued not trying to escape pain in subsequent experiments -- even when they could have escaped very easily by jumping over a low barrier. Instead, the dogs just lay down and cried. This concept came to be known as learned helplessness.
Learned helplessness explains how an individual can move from an area on the continuum characterized as internal to one characterized as external, and while this condition can be induced by pain, it can also be induced by many kinder, gentler ways.
In The Conscience of a Conservative, Barry Goldwater described what he believed would ultimately be the consequences of social welfare on the psyche of its beneficiaries.

The effect of welfarism on freedom will be felt later on -- after its beneficiaries have become its victims, after dependence on government has turned into bondage and it is too late to unlock the jail.

Real-world examples of how modern entitlement programs have done harm to their beneficiaries are boldly presented in libertarian political scientist Charles Murray's Losing Ground. What makes this book stand out, according to Brian Doherty, senior editor of Reason magazine and author of Radicals for Capitalism, is that

Murray does not rely on the 'welfare cheat' rhetoric ... he took a different tone and approach to the free market assault on welfare, speaking in a voice clearly concerned with the fate of the poor and blacks, about incentives and productivity and self-respect ... He uses trendline analyses to show that any improvement in the lives of the poor that happened after [the late 1960s wave of income transfer] programs went into effect was merely a continuation of progress that had begun long before the federal effort did -- and that the progress in most cases stopped as the 1970s began and the program's effects became clear. Crime and unemployment went up for the poor as the welfare state grew in the 1960s; income and educational achievement went down.

According to Murray himself, the inspiration for Losing Ground

grew out of sixteen years of watching people who run social programs ... I was struck by two things. First, the people who were doing the helping did not succeed nearly as often as they deserved to ... Second, the relationship between the ways people were to be helped and the quality of their lives became increasingly confused.

Murray's policy recommendation to improve the social condition and self-esteem of America's poor, which emanated from his personal experience and dedicated research, was to eliminate all racial preference programs, institute educational vouchers, and eliminate all income transfer programs, later reinstating short-term unemployment insurance.
Murray's research provides compelling evidence that suggests that social welfare programs are harming their recipients via the learned helplessness mechanism. However, there is something even worse than creating codependency on government through entitlement programs, according to Lee Harris.

This occurs whenever a deliberate campaign encourages people to think of themselves as victims. Victims are not in charge of their own lives and destinies.

The victimization mentality is closely related to having an external locus of control. As a consequence of this mentality, people who consider themselves victims erect invisible barriers around themselves from which they cannot escape. Like Seligman's dogs, they give up trying because they don't believe they are free to succeed.
The victimization mentality is advantageous for left-wing politicians, who rely on their constituents' needing government benefits. Remember Hillary Clinton declaring, "I am the candidate for individuals who need government"? Unfortunately, the spread of this mentality foreshadows a poor prognosis for the survival of freedom in America.
As has been shown, ideas and public policy influence attitudes (e.g., learned helplessness resulting from entitlement programs), but it is equally true that this relationships works in the opposite direction, and attitudes influence ideas and public policy (Fig. 2).
Figure 2: Multidirectional relationship among attitudes, ideas, and public policy. Clockwise direction (blue arrows) indicates cycle towards freedom that results from internal locus of control. Counterclockwise direction (red arrows) indicates cycle towards dependence that results from external locus. 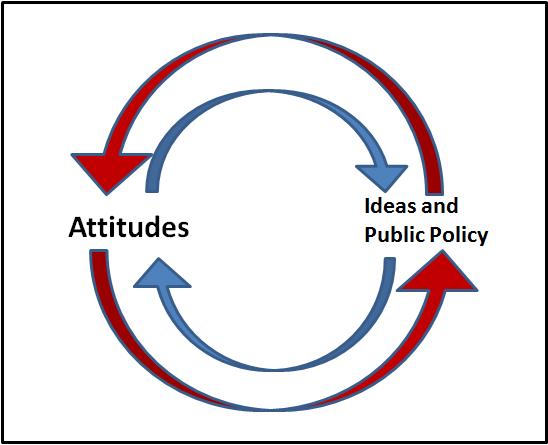 What has resulted in America is a vicious cycle in which government programs along with rhetoric, intended to foster learned helplessness, have led individuals to advocate for more aggressive welfare programs and support the candidates who back them. This cycle ultimately results in dependence (counterclockwise circle) and leads to the fiscal condition America now finds herself in. The inevitable outcome is the destruction of the American Republic. However, because this relationship is multidirectional, it can change course and cycle towards freedom (clockwise).
The most important question, then, is, "How to change the direction of the cycle?" The answer: Individuals with a strong internal locus must preach the value of independence. They must teach those they encounter -- their family, friends, colleagues, and especially the disadvantaged (whom they should make extra efforts to reach out to through voluntary service) -- that as human beings with free will, we are responsible for our own actions, that we are not the victims of fate, and that we will achieve happiness and self-esteem if we take hold of our lives and never let go.
The worst-case scenario for the individual who is moved to take responsibility for his own actions and who believes he controls his fate is that regardless of whether or not he gains any monetary benefit, he will at least gain a sense of autonomy and self-respect. The best-case scenario is that he will influence others around him to adopt his view. If this conversion occurs for enough people, all over the country, then there may be hope for the American Republic yet.
Andrew Foy, M.D. is a medical resident and co-author of The Young Conservative's Field Guide. He can be contacted through the website www.aHardRight.com.
|