By Russell Cook
Meteorologist blogger Anthony Watts normally talks about the crumbling science of man-caused global warming, but recently he described an uninvited office guest demanding to know about his alleged "big oil funding." The charge that only the lure of big money causes people to question warmist gospel is old but, as it turns out, of highly questionable origin.

The misconception that there is a serious disagreement among scientists about global warming is actually an illusion that has been deliberately fostered by a relatively small but extremely well-funded cadre of special interests, including Exxon Mobil and a few other oil, coal, and utilities companies. These companies want to prevent any new policies that would interfere with their current business plans...
One of the internal memos prepared by this group to guide the employees they hired to run their disinformation campaign was discovered by the Pulitzer Prize-winning reporter Ross Gelbspan. Here was the group's stated objective: to "reposition global warming as theory, rather than fact."

Internet searches of the "reposition global warming" phrase show how viral it is. However, more searching reveals former Boston Globe reporter Gelbspan not only has never won a Pulitzer, despite uncountable times he's described as such, but he is also not the discoverer of the "campaign." Intensive investigation reveals only myriad ties to the phrase, but the actual 1991 internal PR campaign memo containing the phrase is never seen.
Gore's 2004 NY Times review of Gelbspan's then-current second book offered this praise:

Gelbspan's first book, "The Heat Is On" (1997), remains the best, and virtually only, study of how the coal and oil industry has provided financing to a small group of contrarian scientists...In this new book, Gelbspan focuses his toughest language by far on the coal and oil industries. After documenting the largely successful efforts of companies like ExxonMobil to paralyze the policy process, confuse the American people and cynically "reposition global warming as theory rather than fact."

Greenpeace director Phil Radford offers more praise in an article describing two people he worked with who most impressed him:

John Passacantando, the former director of Greenpeace, whose strategic instinct and track record of changing the political landscape on global warming has made it possible to imagine that solving the problem could be a reality. And Ross Gelbspan ... who ... uncover[ed] the scandalous cover up of global warming by polluting companies. Ross has been the lone voice ... that has inspired countless people, me included, to demand our country and our future back from the coal and oil interests behind global warming.

The article also says Radford worked for Ozone Action. Prior to 1996, their focus was ozone depletion. Ozone Action had just over/under $1 million worth of contributions per year in 1998, 1999, and 2000 under John Passacantando's leadership, who then merged his group into Greenpeace in 2000. Greenpeace archive records of a 1996 Ozone Action report (page 5, paragraphs 3 & 4) reveal:

The goal of the campaign, according to one planning document, is to "reposition global warming as theory" and not fact.
A packet of internal correspondence and other information relating to the campaign was provided to The New York Times by the Sierra Club, the San Francisco-based environmental group that favors taking steps to reduce the risk of global warming.

Curtis Moore, who cites Wald's article about the "reposition" phrase in his 1994 Green Gold, also refers to an interview of Simmons Advertising's Tom Helland. That appears to be the same Simmons contact "T. Helland" seen on page 13 of another set of Greenpeace scans,* a fair indication that Moore saw the documents. And on page 14, there is a Simmons letter describing "what you'll find in this packet," the same descriptive word in Rowell's book note and Wald's article. Gelbspan refers to other 1991 articles breaking this story near the bottom of the page at his website. An obvious question is: Who discovered these documents?
That second set of Greenpeace scans contains something vastly more important on page 10: the document with the "reposition" phrase in its complete context. Of all the internet searches for the phrase, I found no others showing it in its entirety, or any linking to this Greenpeace scan. In Gelbspan's own hugely acclaimed 1997 book, no scan is shown. He simply says, "ICE documents in author's possession." Why is that? And what is the significance of yet another Greenpeace scan of an October 1996 Kalee Kreider e-mail to "D Becker" at the Sierra Club? That's probably Dan Becker, director of the Sierra Club's Global Warming Program from 1989 to 2006. Kreider worked at Ozone Action just three months earlier, repeating the "reposition" phrase in a media release. Many now know Kreider as Al Gore's spokesperson.
It turns out that the attempted slander of global warming skeptics as tools of big oil is as poorly grounded as the theory itself.

* Author's note 9/17/10: The Greenpeace archive scan at the asterisk above was functioning normally until recently, taking readers to a web page very similar to the screencapture photo below. Multiple thumbnails were seen with a slider underneath, allowing us to move the thumbnails over until the desired one was seen, which could then be clicked on to generate a large view in the area below. This link seems to be perhaps the victim of what web masters call a "bunged" server, meaning unmaintained, sick, or awaiting a sysadmin to flush a temp folder. The "Next" link under the thumbnail still does allow viewers to move on to the next page image, it's just more clumsy to do that. The PDF file itself is still downloadable, and the page may heal itself later. If Greenpeace scrubs the page, then we have a different problem, so I'd advise downloading while the opportunity is still available. 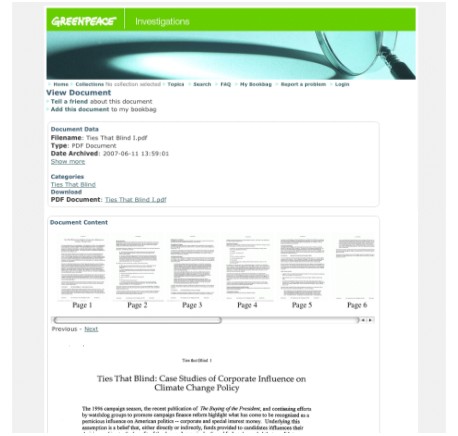