Warning: mysqli_free_result() expects parameter 1 to be mysqli_result, bool given in /var/www/html/americanthinker/admin/common/functions/func.general.php on line 126
 The Truth about the Unemployment Rate in America - American Thinker
|

The Truth about the Unemployment Rate in America

By Alan Aronoff
Changes in the unemployment rate are driven by interaction of job destruction, which consists of job losses through voluntary and involuntary job termination and job creation resulting in the hiring of employees. This interplay of job destruction and job creation drives the changes and direction of the unemployment rate. James Sherk at the Heritage Institute points out in his latest article that job losses in the current recession are not as severe as they were during the recession in 2001. The reason the unemployment rate is so much higher in the current recession is due to the lack of job creation.
According to the Bureau of Labor Statistics JOLT (Job Openings and Labor Turnover Survey) data, not only are private sector job losses now at a level lower than in the 2001, but job creation is 20% lower since the recession trough of 2001. Job creation is reflected in the JOLT statistics as hires. Job destruction is shown as job losses due to job separations, both voluntary and involuntary. For example, if a person voluntarily quits a job to take a new job, this shows in the statistics as one job destroyed and one job created. Figure 1 below shows the jobs created versus jobs destroyed from 2001 until April 2010. The thick horizontal line in the table shows the level of jobs created at the low point of the 2001 recession. As of the latest jobs report from the Bureau of Labor Statistics (BLS), the level of jobs created stands about 20% below the level in 2002. Furthermore, the jobs being destroyed are at the same level 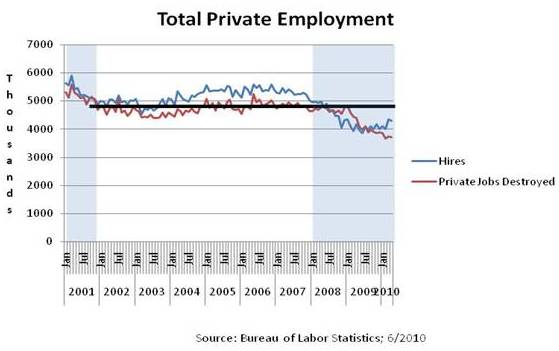 as has existed over the average of the last ten years, with the exception of the period beginning at the latest recession in December 2007. Figure 2 shows that the stimulus bill has a positive effect on the jobs at the government level; it also shows the level of government job creation and destruction for all levels of 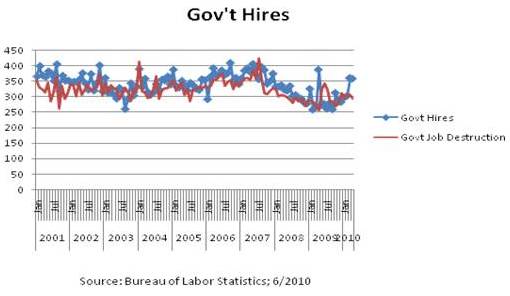 government, including federal, state, and local from 2001 to April 2010. During the current recession, job creation and destruction are correlated as one would expect from government, where reductions in force do not generally occur. Government jobs do not disappear except in the case of temporary workers, such as the 411,000 census workers hired as outlined in the May jobs report. Job destruction in the private sector is now at a level consistent with the level from 2002 to 2008.
President Obama claimed in February 2009 when the $787B stimulus bill was passed that three and a half million jobs would be created or saved. Aside from the obvious obfuscation and inability to measure "jobs saved," he has accomplished this objective -- in the government sector, but the cost to private-sector job creation can be readily seen from the charts above.
None of the initiatives that this current administration has pursued has improved job creation.

Of course, since neither the president nor his key advisors have any private-sector experience, they cannot be expected to know how jobs are created in the private sector. President Obama is now pushing Congress to pass an additional $50B spending bill to extend unemployment benefits and bail out state governments. Americans want jobs and the ability to participate in an economy whereby through an individual's efforts, a brighter future can become reality. Unemployment benefits are no substitute for a job.
|