By Geoffrey P. Hunt
Obama's White  House stands accused of tampering with U.S. Senate primary elections involving Joe Sestak in Pennsylvania and Andrew Romanoff in Colorado. Both Democratic primary challengers apparently were urged to drop out of their races by White House operatives in exchange for a job. The details remain murky as storylines from White House officials, along with Sestak and Romanoff  themselves, are both evasive and implausible. But this much is clear: Election tampering by Obama treads upon the very foundation of American exceptionalism -- free elections in a representative democracy.
Cynics and apologists alike brush aside this scandal. It's business as usual, both political parties do it, you have to be naïve to believe this kind of electioneering is rare. In fact, Ed Rendell, Governor of Pennsylvania, on "Fox News Sunday" with Chris Wallace, had the gall to assert that this kind of election manipulation shows presidential leadership in getting things done.
Well, election tampering and transparent corruption are not business as usual unless you're a Democrat. Whether it be suppression of the black vote in the south for a hundred years after the Civil War, Tammany Hall politics at the turn of the 20th century in New York, machine politics in Chicago, or bribes and payoffs for votes on health care and stimulus funding, the failure to prosecute polling place intimidation by the Black Panthers in Philadelphia or Acorn voter registration fraud, this is the Democratic Party Way, the Obama Way.
In a quote attributed to Robert Gibbs, Obama's mouthpiece, "The White House has a legitimate interest in avoiding messy Democratic Party primaries. ... Presidents, as leaders of their parties, have long had an interest in ensuring that supporters didn't run against each other in contested elections." Oh really? Should presidents bribe rivals to get them out of the way?
Indeed, free elections are messy. President Obama himself said so in his commencement address this year at the University of Michigan: "U.S. politics long has been noisy and messy, contentious, complicated" -- a repeat of lines in his 2010 State of the Union, "Democracy in a nation of 300 million people can be noisy and messy and complicated. And when you try to do big things and make big changes, it stirs passions and controversy. That's just how it is."
Apparently it's too messy, excessively contentious, and inconveniently complicated for Obama and his operatives to honor the bedrock principle in American governance.
The Founders, especially James Madison, had great difficulty with direct democracy for good reason. Representative democracy instead offered stability and a check against mob rule. And a greater number of representatives would be an inoculation against corruption by the cabal of too few. But a reliance on representative democracy placed a heavy burden on the process of electing those representatives. "[S]uffrages of the people being more free, will be more likely to centre in men who possess the most attractive merit and the most diffusive and established characters" (From the Federalist No. 10).
The symbolism of free elections in a representative democracy is best depicted in the 1851 painting The County Election by Missouri artist George Caleb Bingham, now owned by and displayed in the St. Louis Art Museum. 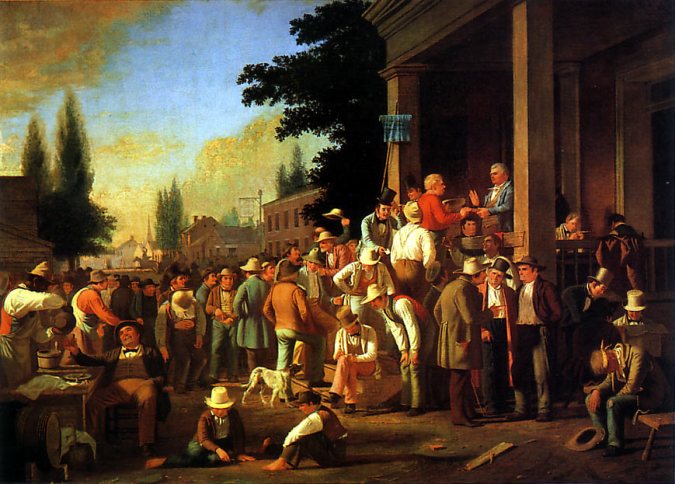 Bingham, who painted a series of mid-19th-century political scenes, shows a typical small-town election somewhere in rural America. This painting evokes the characteristic ritual of American representative democracy, free exercise of suffrage. Of course, in 1851, universal suffrage was not yet the norm. Yet the scene evokes a "noisy, messy, contentious, and complicated process," as Obama would say. Simultaneously subtle and athletic -- with suasion and vote-prodding from a snort of hard cider, heated words, raised voices, muscular posturing, and even a newspaper editor's rant.
And despite the sweaty, dusty, and strong breath elements of electioneering, the sacred ritual of a fully accessible process -- even Election Day mischief-making and influence-peddling, but all in the open, where voters can actually cast a ballot for their choices -- is at the heart of the American system of governance.
Obama, riding the wave of a popular coronation, has been imposing governance through the raw power of an unbridled majority and has little patience for this sort of pluralism, especially when it interferes with his agenda. It's hard to imagine Obama endorsing Bingham's brand of representative democracy.
Obama's hollow complaints against assaults on democracy, notably his condemnation of the Supreme Court ruling on Citizens United vs FEC during his State of the Union address, are hailed by his Democratic Party bedfellows. Yet how easy it is for these same party hacks and shameless partisans to either ignore or rationalize Obama's own assault on democracy when he manipulates federal election primaries.
Since the Voting Rights Act of 1965 was passed -- and, by the way, was enabled by a far greater proportion of Republican than Democrat U.S. senators -- Democrats and liberals have been grandstanding self-promoters decrying voter disenfranchisement. But where is this purity of process when it comes to arriving at the actual names on the ballot?
And who are now the champions of suppressing free speech through revival of the Fairness Doctrine and eliminating the U.S. Senate rules on the filibuster and cloture? The Democrats. Who are now advocating the regulation of journalism through the Federal Trade Commission? The Democrats.
Obama and his operatives cannot escape the stench from their wholesale corruption of American governance. And their amateurish bungling is neither amusing nor defensible. Tampering with federal elections is only the latest in long line of brazen, cynical manipulations. Only a few among today's political class, notably Rep. Darrell Issa (R-CA), have the courage to call out such treachery by demanding an independent inquiry. How long will their courage hold out?
|