Warning: mysqli_free_result() expects parameter 1 to be mysqli_result, bool given in /var/www/html/americanthinker/admin/common/functions/func.general.php on line 126
 Obama and the Rising Mob Against Israel - American Thinker
|

Obama and the Rising Mob Against Israel

By James Lewis
The Middle East is now teetering on the brink of war because a vast international mob has been loosed, with the tacit approval of Barack Hussein Obama. That is the real meaning of the Gaza martyrdom stunt of May 31, 2010. That purposeful provocation is not past. The Gaza suicide operation is still being used all over the Middle East and Europe to whip up hatred and violence.
As Mark Steyn just reported from a dingy cafe in Morocco,

I can just about make out the plasma TV up in the corner on which Jimmy Carter, dubbed into Arabic, is denouncing Israel. Al Jazeera doesn't so much cover the Zionist Entity as feast on it, hour after hour, without end. So here, at the western frontier of the Muslim world ... the only news that matters is from a tiny strip of land barely wider at its narrowest point than a rural Canadian township way down the other end of the Mediterranean. ... (there is) saturation coverage of the "Massacre In The Med" (as the front page headline in Britain's Daily Mirror put it)."

Iran, Lebanon, and Islamist Turkey have just announced new flotillas to break the Gaza blockade. If they succeed, it will not stop with Gaza. The conquest of Jerusalem and rest of Israel is the target. That is why Ahmadinejad has trained all his life in the "Al-Quds" (Jerusalem) Brigade of the Iranian Revolutionary Guards, the shock suicide brigade for reconquering Jerusalem. That is why the Hamas flag shows a green Islamic Jerusalem. It is why Kofi Annan at the U.N. proudly posed in front of a map of the Middle East with Israel erased.

Mob psychology has now been loosed upon the world again -- in the European media, the U.N., and the Middle East, all of them against the common scapegoat of Israel. 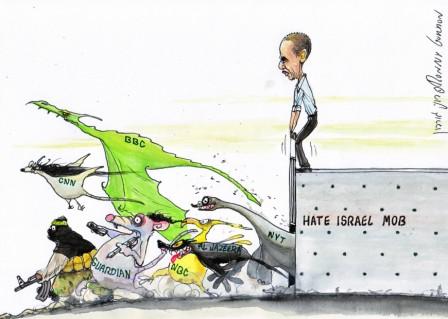 cartoon by Ronny Gordon
Lynch mobs have a psychology. They need agitators to whip up popular rage against their victims -- like the "community organizers" in Chicago, who once upon a time used to proudly call themselves communist "agitators." But agitators need followers, who do the actual work of running riot, killing, raping, and burning their helpless scapegoats in their homes and businesses. Think ACORN and the Black Panthers.
Finally, mobs need enablers, the authority figures -- the cops, military, and politicos who give the signal that it's now okay to run riot and kill the helpless victims of the moment. Political authorities usually try to control incipient mobs, because their power depends on keeping order. But in Russia and the Dixiecrat South, politicians and cops commonly withdrew their protection at critical moments and signaled the mobs when it was okay to run riot against victim groups like the Jews or the blacks. It happens all over the world, and the race, ethnicity, religion, or wealth of the victims makes no difference. A group label is enough.
Barack Hussein Obama is now playing the biggest role in the mob psychology of the Middle East. Why? Because he is the authority figure who has given the signal that it's okay to attack Israel. That is why Islamist Turkey, Lebanon, and Iran just announced that they are sending new flotillas to challenge Israel's small coastal navy. Intentionally or not, Obama has given the green light for Israel-haters to attack. In fact, this appears to be his strategy to put pressure on Israel to appease the Arabs, Iranians, Hamas, Hezbollah, and Fatah, the unappeasable mobs that want only to kill Israel.
That is how Obama's Cairo speech was interpreted by the agitators and mobs of the Middle East. It is how his middle name was interpreted, and how his reported remark to the Egyptian Foreign Minister that "I am a Muslim" is perceived. If Obama really is a Muslim, then he must follow the Quran. Turkish PM Erdogan has openly said that "a Muslim cannot commit genocide" -- because the Quran explicitly demands genocide against infidels who do not surrender to Islam. That is why the Turkish suiciders on the cruise ship Mavi Marmara screamed "Khaibar! Khaibar!" while attacking Jewish commandos rappelling down one by one with paintball guns. Khaibar is the name of a Quranic genocide committed by Mohammed against the Jews. It's like Neo-Nazis screaming "Auschwitz! Auschwitz!"
For almost a century, the United States has been the cop on the world beat, as the British Empire declined and crumbled. The U.S. was the great, civilized power that supported freedom of trade; resistance against the Kaiser, Hitler, and Stalin; relative peace in the third world; and the protection of post-World War Two stability, ranging from Japan and South Korea to Israel and Berlin. Europe today would not exist were it not for American protection; it would be a Soviet colony. India and Pakistan might be in a hot war. China might be attacking Japan to retaliate against the horrors of World War Two, which are constantly repeated in the Chinese media. Ancient hatreds exist all over the world, ready to explode when the cop on the beat gets drunk or just resigns.
The United States has preserved the balance of power and kept it on the side of civilization against the mob. All the feeble regimes in the third world depend upon us to come to their aid against their own mobs and agitators. In fact, those regimes are just the mob agitators who won the last round.
We are the cop on the beat that keeps the world from bloody anarchy. When the president of the United States signals that it's okay to run riot against the scapegoat of the moment, all the tottering regimes know they have to give in to their domestic mob agitators. That's what Mark Steyn was watching on Al Jazeera TV in Algiers.
This is what William Butler Yeats saw during the rise of the Nazis, when he wrote his poem "The Second Coming":
TURNING and turning in the widening gyre
The falcon cannot hear the falconer;
Things fall apart; the centre cannot hold;
Mere anarchy is loosed upon the world,
The blood-dimmed tide is loosed, and everywhere
The ceremony of innocence is drowned;
The best lack all conviction, while the worst
Are full of passionate intensity.

Mob psychology has now been loosed upon the world again. Only an assertive superpower can stop them, and that is the United States. If Obama fails to understand that, the Gulf, Israel, and perhaps the Indian subcontinent will explode.
|