In case you haven't realized that Obama and his media minions' relentless playing of the race card could inspire violence, I have some news for you. The New Black Panther Party hosted a National Black Power Convention. The following chilling quote is from the convention organizer and party chairman:

"With the rise of the Tea Party, the white-right and other racist forces. With gun sales nationwide at an all time high amongst whites, with a mood that is more anti-Black than any time recent, it is imperative that we organize our forces, pool our resources and prepare for war!"
- Malik Zulu Shabazz, Esq., Convention Convener and Party Chairman

"...prepare for war!" -- folks, this is crazy talk. I am black conservative, singer/songwriter and tea party spokesperson Lloyd Marcus. I have attended over two hundred tea parties across America on three Tea Party Express tours.
Most assuredly, the tea parties are not about racism or hate. The truth is quite the opposite. The tea parties are about love; love for the greatest nation on the planet and a fervent desire not to see it transformed into something unrecognizable. The Tea Party Movement is no more complicated than that.
So where did the New Black Panther Party get the erroneous idea that the tea party patriots are, as Janeane Garofalo says, "a bunch of redneck racist against a black president"? The unfortunate answer is the Obama media machine.
Willing to sacrifice anything, including national race relations, to further their socialist/progressive agenda, Obama and the liberal mainstream media aggressively continue to sell their big fat lie, the "America is Racist" campaign. This is pure evil.
The latest installment by Obama and his media minions to their "America is Racist" campaign is their misrepresentation of the Arizona immigration law. In a nutshell, the law simply applies the same commonsense rules to illegals as it does to Americans. The Arizona law says that if you are stopped for a traffic violation, you must show proper ID. It is milder than the federal law and prohibits racial profiling.
Unscrupulously, Obama even recruited the president of Mexico to assist in the promotion of his lie that the Arizona law is racist and condones racial profiling. Obama's sycophant liberal mainstream media refuse to report the truth about the Arizona law, the tea parties, ObamaCare, or anything else that would expose their socialist/progressive agenda. 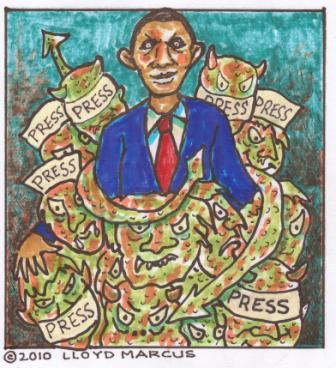 As a matter of fact, to kick their "America is Racist" campaign up a notch, the liberal mainstream media embellish their lie. Liberal commentator Sam Donaldson outrageously compared the Arizona law to Tienanmen Square.
Meanwhile, angry illegals and supportive activists are threatening violence against the police.
As a child, I naïvely thought only a great human being could become president of the United States. Obama has truly shattered my Norman Rockwell image of the quality of person capable of occupying the Oval Office.
And when did the mainstream media completely sell its soul to the devil? Despite catastrophic declines in revenue, subscribers, and viewers, and a loss of credibility besides, the liberal mainstream media have thrown their chips "all in" betting on Obama. Conservative media are thriving.
Apparently the liberal mainstream media's mindset is "Even if it leads to a race war and attacks on the police, we will not report the truth regarding the tea parties and the Arizona law."
On the surface, it would appear that We The People are helpless in holding Obama and his media minions accountable for their irresponsibly divisive and violence-inspiring "America is Racist" campaign. Obama has the bully pulpit of the White House to spread his lies. A majority of the media are socialist/progressives. How can We The People possibly defeat them?
Here is our game plan. Opposite the typical irresponsibly "spoiled brat" behavior of the supposedly peace-loving, compassionate, and tolerant left, we will not resort to violence. We will win by doing what is right, honorable and true. We pray. We unite. We trust God.
Our strength is generated not by hate, but through our passionate love for America. We must and will defeat Obama and his media minions. To all my fellow patriots, hang in there. I love you.
- Lloyd Marcus, (black) Unhyphenated American