How Did the New Deal Work Out?

By Greg Richards
Since the administration is in the process of trying to "jump-start" the economy with deficit spending, it is useful to review how the policies of FDR actually worked out in terms of economic performance in the 1930s.
The New Deal was not specifically a "Keynesian" program, in part because Keynes' magnum opus, The General Theory, was not published until 1936. However, the New Deal is regarded by Keynesians as the ur-program of government stimulus of the economy. This chart shows what happened to GNP during the New Deal. 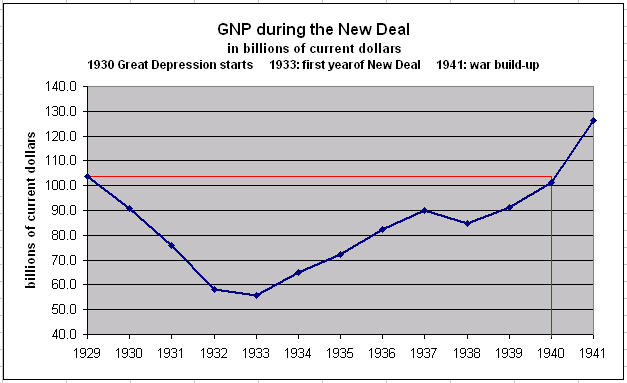 Its time scale, as is true for all the charts in this article, is from 1929 to 1941. The year 1929 was the last before the Great Depression began, and 1941 is the first year in which the buildup for World War II had a significant effect. War production during 1941 reflected the passage of Lend-Lease in March 1941 to supply the British, Russians, and Chinese. Pearl Harbor occurred on December 7, 1941. The year 1942 and beyond reflect the total mobilization for World War II and represent a different world from the 1930s.
As can be seen in this chart, the first wave of the Great Depression occurred from 1929 to 1933, where GDP (in current dollars) went from $104 billion in 1929 to $56 billion in 1933 -- a decline of an astonishing 46%! Truly a crushing contraction. While the economy "recovered" from 1933, the first year of the Roosevelt administration, to 1937, it had another recession that year that carried GDP from $90 billion to $85 billion, or a contraction of a more normal recession level of 6%, but in its day, it was quite upsetting because of the continued high level of unemployment.
Note that GDP did not return to the 1929 level until 1940!
What did this mournful decade for the economy mean for employment? 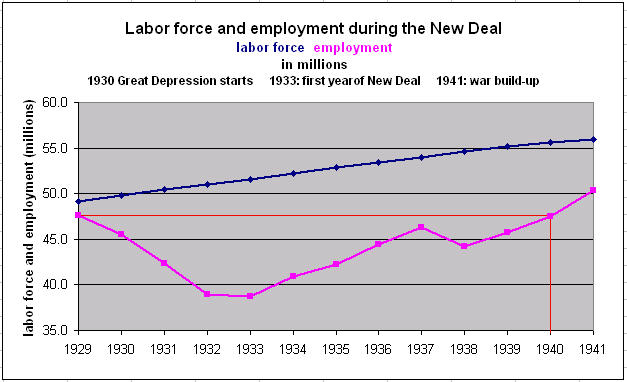 The top line in this chart is the labor force, which shows steady growth due to the increase in population. The economically affected line is the red one, which shows employment during the New Deal. The pattern of this line matches that of GDP in the first chart. There is a dramatic swing down in employment from 1929's level of 48 million to the low point of the decade in 1933 of 39 million. This is a contraction in employment of 19%. This contraction, combined with the growth in the work force (top line in the chart above) during the same period, had a devastating effect on the unemployment rate, as shown in the next chart. 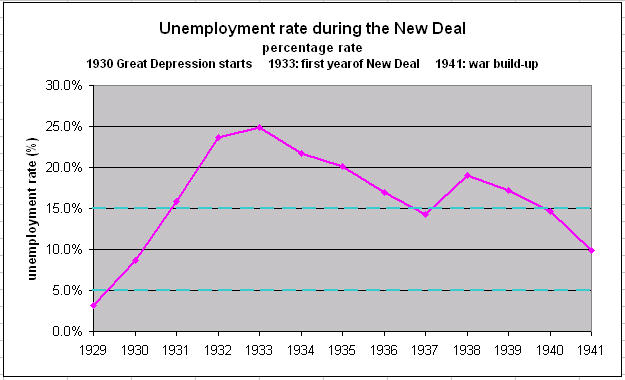 The unemployment rate soared from a pre-Depression level of 3.2% in 1929 to a disastrous 24.9% in 1933. The chart has two dotted lines to help your eye -- one at 15% and one at 5%. The one at 15% is there to help emphasize that the unemployment rate did not get below 15% until the start of the war buildup in 1941. This, in spite of all the New Deal programs during the 1930s. The 5% line is there to emphasize just how far above a "normal" unemployment level of 5% the 1930s experience was.
The New Deal was an experimental program, not specifically a Keynesian one. At that time, economists did not have the theory that federal deficits by themselves would stimulate the economy by making up a deficiency in aggregate demand. Rather, the New Dealers decided that they would not let a balanced budget get in the way of government spending on programs designed to help the economy and relieve some of the suffering of unemployment. Nevertheless, the New Deal has come down to us as a de facto Keynesian program, so let's look at the level of federal deficits during the 1930s. 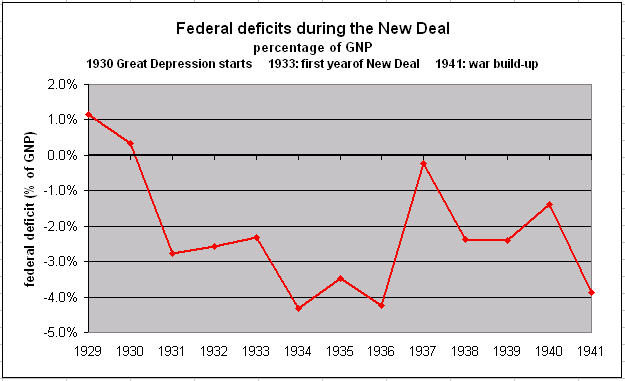 From a surplus in 1929, the federal budget went into deficit for the entire 1930s -- both the Hoover and the Roosevelt administrations -- "peaking" out at 4% of GNP, a very large number in those days for a non-wartime period. As can be seen from this set of charts, these deficits were not sufficient to restore the economy to health. It can be argued that they resulted in some improvement in the economy, and that the reduction in the deficit virtually to zero in 1937 helped create the recession of that year.  Keynesians will argue that had the deficits been larger, the effect on the economy would have been more beneficial. As with all social science outcomes that are anchored in history, this point cannot be proven one way or another.
The overall conclusion that I and many others draw is that the New Deal policies did not restart the economy and were by that definition a failure. This is a cautionary experience for our current condition, as there is a tendency for Keynesian economists and their followers to assume that the New Deal was a success. But note that the unemployment rate during the entire 1930s never dipped below a disastrous 15%!
What caused the Great Depression? Economists do not agree on the answer to this question, but there was basically no answer to it until the 1963, and the publication of A Monetary History of the United States 1867 - 1960 by Milton Friedman and Anna Jacobsen Schwartz.
(Even among economists, it is not generally known that the cause advanced by Keynes in The General Theory was not just an insufficiency of aggregate demand, but an exhaustion of high-yielding investment opportunities in a mature economy (as then perceived) leading to oversaving and underconsumption. I.e., The General Theory is not a manual for managing the business cycle, but a diagnosis that demand in a mature economy would wind down due to satiation of needs and to lowering returns on investment and that it would have to be permanently supplemented by government spending to achieve full employment.)
Friedman and Schwartz shook the economics profession by hypothesizing, and, in the view of many, demonstrating that the cause of the Great Depression was a contraction in the money supply (M2). M2 during the New Deal is shown in the following chart. 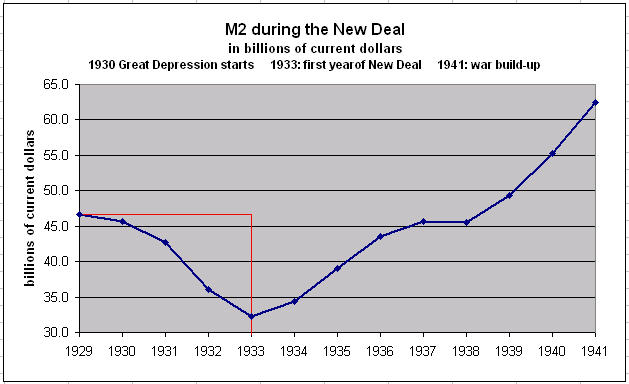 What Friedman and Schwartz discovered was that the money supply -- M2 -- was allowed by the Fed to contract by 31% -- virtually one-third -- between 1929 and 1933! This was a catastrophic error, not least because the 1929 downturn in the economy was the first "modern" recession where there was significant consumer debt outstanding. The 1920s were the first big consumer decade in U.S. history. The refrigerator, washing machine, and automobile were the PCs of their day, combined with the development of the mortgage market.
The very violent post-World War I downturn in 1920-1921 was the last of the "classical" recessions, where there was not significant consumer debt in the economy, and so prices could be allowed to drop precipitately. Once there was significant consumer debt outstanding, a drop in prices -- deflation -- was catastrophic because debt repayments then had to be made in more expensive dollars. The Fed did not understand the structural change in the economy between the end of the 1920-1921 recession and the onset of the 1929 recession and thus viewed a contraction in the money supply with equanimity. This was a historic mistake. Friedman and Schwartz identified this contraction in M2 as the factor that turned an ordinary recession in to the Great Depression. This is the reason that Ben Bernanke has stressed during his tenure as Chairman of the Fed that he will not permit deflation to occur.
What is the takeaway from this analysis? Two points.
|