Health Care Statists on the March

By Andrew Foy, MD
The American Medical Association's top journal publishes an article calling for startling change to our medical and political system.

Not content with passage of recent health care reform, doctors Samuel Sessions and Allan Detsky suggest that US citizens ignore the literal meaning of the Constitution. This would allow health reformers to transform the US medical system with fewer roadblocks.
Writing in the Journal of the American Medical Association (JAMA), they conclude their piece:

"Further health care reform will almost certainly be needed for both budget and health policy reasons. The Constitution is here to stay, but a better and more critical understanding of how it operates today, not in 1789, may help the United States achieve these reforms."1

In the commentary however, Sessions and Detsky provide no detail on the reforms "needed for both budget and health policy reasons."1 To better understand the reforms they advocate one must examine the Blue Sky Health Initiative who "provided suggestions regarding the topic of the manuscript."1
According to Blue Sky's mission statement:

"We believe the solution isn't to tinker with our current system; it's to pursue a fundamentally new approach. We need transformational reform."2

Considering the state of our current health care system, which is a private-public hybrid, transformational reform would require going either extensively in the direction of a free market system or in the opposite direction of total government control. Blue Sky favors the latter. Their website goes on to state:

"We know that things like access to healthy foods, recreational opportunities, clean air and water, education, living conditions, family life and so much more affect the quality and longevity of our lives. In fact, scientists now agree that what happens outside a doctor's office has a far greater impact on health than what happens inside."2

The people at Blue Sky aren't content to just overhaul the medical-decision making process (decisions that occur between you and your doctor) but seek to regulate the foods you eat, the recreational opportunities in which you partake, the quality of your environment, the house you live in and the decisions you make with your family in order to carry out their fundamental transformation.
The model for Blue Sky's transformed system places the individual patient at the periphery and makes him subject to "aggregation and allocation" determined by the "Health Development Trust." One can imagine this trust will replace the Centers for Medicare and Medicaid as the "all encompassing" medical decision-maker when the private health care market is completely brought under government control. In addition, the diagram displays how this new health care system will interact with a multitude of areas not traditionally considered to be part of the health care system. 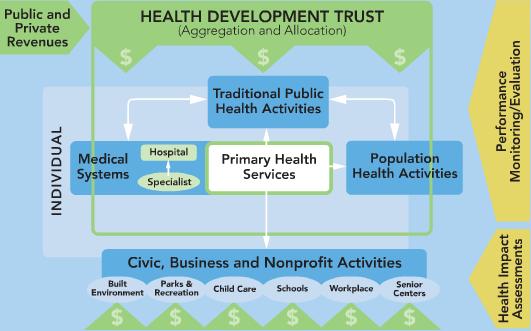 But despite this far-too-complicated diagram designed to make the average reader stop and think, "damn, we better just hand this whole thing over to the self-appointed experts right now," Sessions, Detsky and the rest of those at Blue Sky know that this transformational reform will not sit well with the vast majority of Americans, especially given the public sentiment toward the reform that was already passed. For the very idea of government-run health care conflicts with the American idea of a free society and the Constitutional principles underlying it -- the principles of individual rights, personal responsibility and free markets.
Therefore, Sessions and Detsky advocate a backdoor approach that would consist of relaxing our Constitutional interpretation, in order for those in power to implement radical reform.
The authors recommend as a model the Canadian government with its parliamentary system because as they say, "in Canada government can much more easily do things."1 In Canada, geographical areas comparable with US congressional districts each select a member of the House of Commons and the party with the most house seats forms the government. The party in power chooses its leader who becomes the head of the federal government. Sessions and Detsky boast how in Canada, "executive and legislative power is always aligned, and the parliamentary system is built on party discipline."1
Simply put, in the Canadian system, a party can attain power and ultimately pass whatever laws it wants to. This type of system is conducive for those seeking radical reform.
But unlike Canada, the American system is much more restrained. As Sessions and Detsky point out "the executive and legislative branches are actually designed to be misaligned...The Senate and House of Representatives are indisputably, even fiercely, independent. Senators and members of the House of Representatives are accountable primarily to their constituents. The president and congressional leadership have only indirect power over their parties."1
However, what Sessions and Detsky see as a downside to the Constitution is exactly what so many Americans cherish about this brilliant, Conservative document. The prevention of hasty reform and safeguard against arbitrary power is exactly what the founders intended with separation of power and the system of checks and balances that was created.
In his famous work, A Defense of the Constitutions, John Adams labored to provide evidence from the historical record that only a balance of powers makes a free government possible. He writes,

"By the authorities and examples already recited, you will be convinced that three branches of power have an unalterable foundation in nature...and that if all of them are not acknowledged in any constitution of government, it would be found to be imperfect, unstable, and soon enslaved..."3

In summarizing Adams views on the importance of balancing power historian Russell Kirk (1918 - 1994) writes, "Without balance in government, there can be no true law; and without law, no liberty."3
But progressive reformers like Sessions and Detsky and those at the Blue Sky Health Initiative aren't concerned about protecting liberty, only with securing power. Their intention is to transform the US health care system through means of a social driven calculus that ignores the will of free individuals that our pesky system of checks and balances was established to protect.
References:
|