The media's tongue bath for President Obama knows no bounds.

We all know that President Obama likes to play basketball. We also know his picks in the NCAA brackets and his percentile ranking among four million-plus entries after each round of the tournament on CBS's website. Harry Smith of the CBS morning program interviewed the president on the court this week while he shot baskets with CBS broadcaster and former college star Clark Kellogg.
The video will be shown during the NCAA semifinals Saturday night and again Monday night during the championship game. So 30 to 40 million folks will get this puffery delivered to them. Of course, we have already had Obama in the booth for a Georgetown basketball game this year, on Monday Night Football, and at the major league baseball All Star Game.
Sad to say for Obama, he had a good first round, but he has now slipped to the 55th percentile with his NCAA picks. Since none of his final four teams are left, he may slip to the bottom half by tournament's end. Some percentiles we will never know about the president: his SAT scores, his LSAT scores, his class rank at Columbia, his grades at Occidental (which somehow got him into Columbia as a transfer), or his class rank at Harvard Law School.
Could it be that he was outperformed in these areas by George Bush?
It has been a wonderful tournament, so don't let the political foreplay ruin it for you this weekend.
Do you recall ever hearing a story, no less multiple stories with updates, about President Bush's picks in the NCAA college basketball tournament?
President Bush was an unusually fit man for his age, by all measures in the top 1%. He jogged at a very rapid pace, and he worked out every day. He encouraged other White House staff to exercise and lose weight. Funny -- we heard almost nothing about this.
I don't recall any journalists writing about their jogs with the president (they would have been left looking like President Carter on his infamous run when he collapsed in the Maryland hills). President Bush was also a big sports fan and a former owner of a major league baseball franchise. My guess is that he filled out a bracket each year but did not choose to make it a news story.
In December 2004, my wife and I were invited to and attended the White House Hannukah Party. Try as you might, you will not easily find anything in the mainstream media to reveal that President Bush was the first president to hold such an event. His guest list included both Democrats and Republicans.
Now we have the spectacle of the White House seder, glowingly detailed on the front page of the New York Times. We also learn from the president that the meaning of Passover is that each generation must fight suffering and oppression (and presumably redistribute the wealth of the country). And I guess that if Jerusalem came up in the president's seder, as Professor Charles Lipson suggests, the line might have been: Next year in part of Jerusalem.
It is possible that a few of the herd of Jews who claim to be supporters of Israel -- and who were willing to ignore the president's history with Reverend Wright, Ali Abunimah, Rashid Khalidi, Bill Ayers, and Samantha Power; and not only vote for the great leader, but empty their wallets for him; and testify to his pro-Israel bona fides -- may be reconsidering. I emphasize "possible."
Jewish liberalism is a long-term and terminal disease. Very few can think of switching horses -- after all, liberal Jews grew up believing that liberals and Democrats care for the poor and are generous, and conservatives and Republicans are greedy. Hence, liberals and Democrats are better people. And of course, Franklin Roosevelt, the greatest hero prior to Obama, saved the Jews. Or a few of them, anyway.
With the backlash against Obama's recent outbursts and bile directed at Israel, it was time for the Times, the Torah of Jewish liberalism, to make clear that even if Obama does not love right-wing Israeli settlers, he still loves the Jews. Look -- he has a seder! 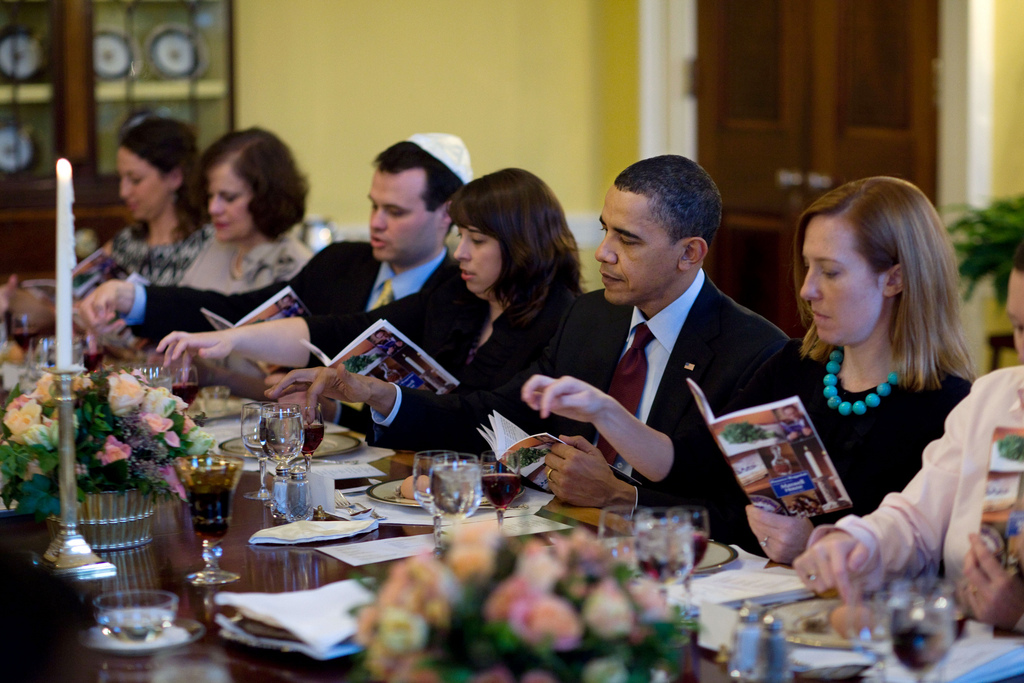 Official White House photo by Pete Souza
The President is wearing a yarmulke. Blacks and Jews are sitting together, like in the glory days of the Civil Rights Movement. Let us kvell.
Richard Baehr is chief political correspondent of American Thinker.
|