Warning: mysqli_free_result() expects parameter 1 to be mysqli_result, bool given in /var/www/html/americanthinker/admin/common/functions/func.general.php on line 126
 Was the Arctic Ice Cap 'Adjusted'? - American Thinker
|

Was the Arctic Ice Cap 'Adjusted'?

There is an entity called the National Snow and Ice Data Center. If you go to its website, you can find data and plots of sea ice extent. In particular, you can find the size of the Arctic ice cap, or what the NSIDC calls Northern Hemisphere sea ice. The graph shown on April 2, 2010 is reproduced below. 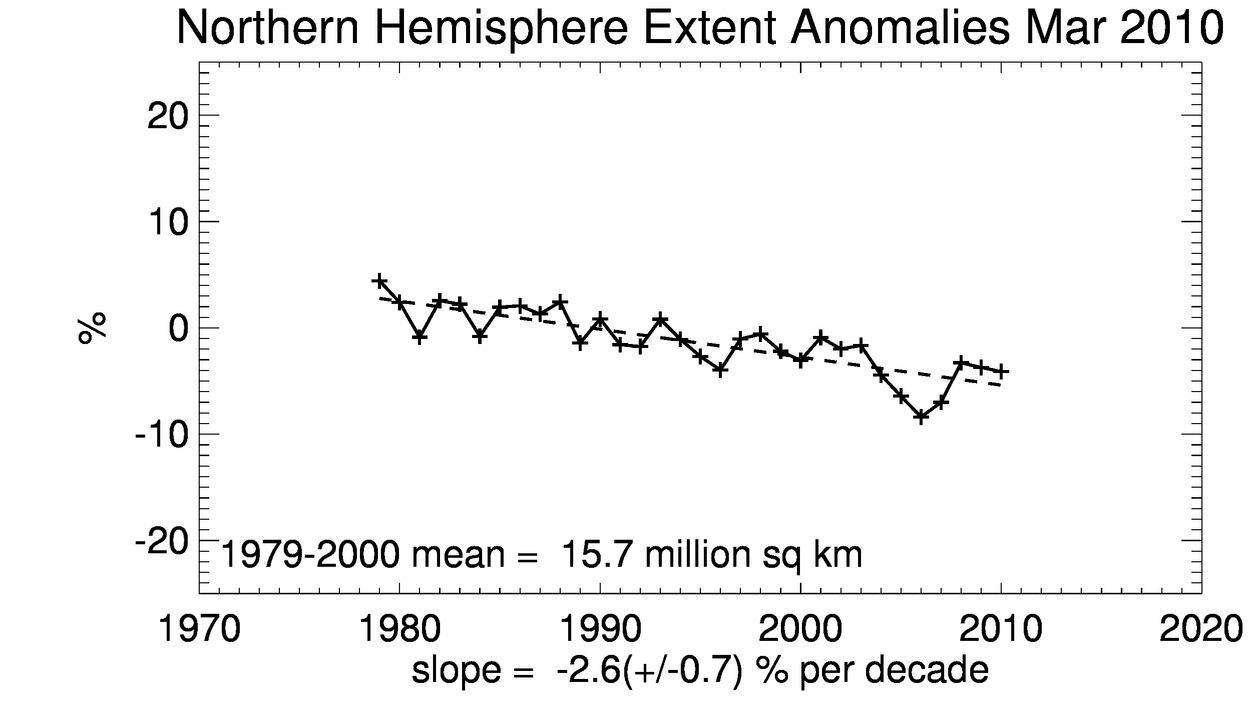 The data points in this chart reflect the extent of northern hemisphere sea ice in March of each year. The chart indicates that the arctic ice cap is melting -- at a rate of 2.6% per decade (about 0.41 million square kilometers). At that rate, the polar ice cap would be gone in 385 years.
Such data have a lot of folks dismissing the CRUgate shenanigans as not all that relevant. Who cares about temperature data when you have the Arctic ice cap staring you in the face? For example, Katie Couric said, "A picture is worth a thousand e-mails, and pictures of the polar ice caps show a 20% decrease since 1979."
First off, the above graph shows only an 8% decrease over the last 31 years, not a 20% decrease. So Katie would seem to have exaggerated.
But things get really interesting if you look at NSIDC's raw data, which come from the National Ocean and Atmospheric Administration (NOAA). You will notice that the above chart is of sea ice "extent." The data actually come in two versions: "extent" and "area," which are not quite the same.  Here is how the NSIDC explains it.

My reading of those "important" words is that the only thing really measured by satellites was "area." Yet the plot also shows "extent," something more than was measured. And the difference is something they "assumed." (If you have a better explanation of that "Important Note," please enlighten me.)
What were the differences? From the above words from the NSIDC, you would think that the differences would be constant offsets (1.19 million sq km from 1979 through June of 1987, and 0.31 million since). But the actual differences in the data file were not constant at all; they varied between 1.93 and 3.42 million sq km.
Why is the area of an assumed region included in the NSIDC's graph? More importantly, why does that assumed, non-measured area vary from year to year and month to month in no apparent pattern?
The NSIDC does not provide a plot of the one thing that is measured: area. But I do, below, all based on the raw data provided at the NSIDC's website. 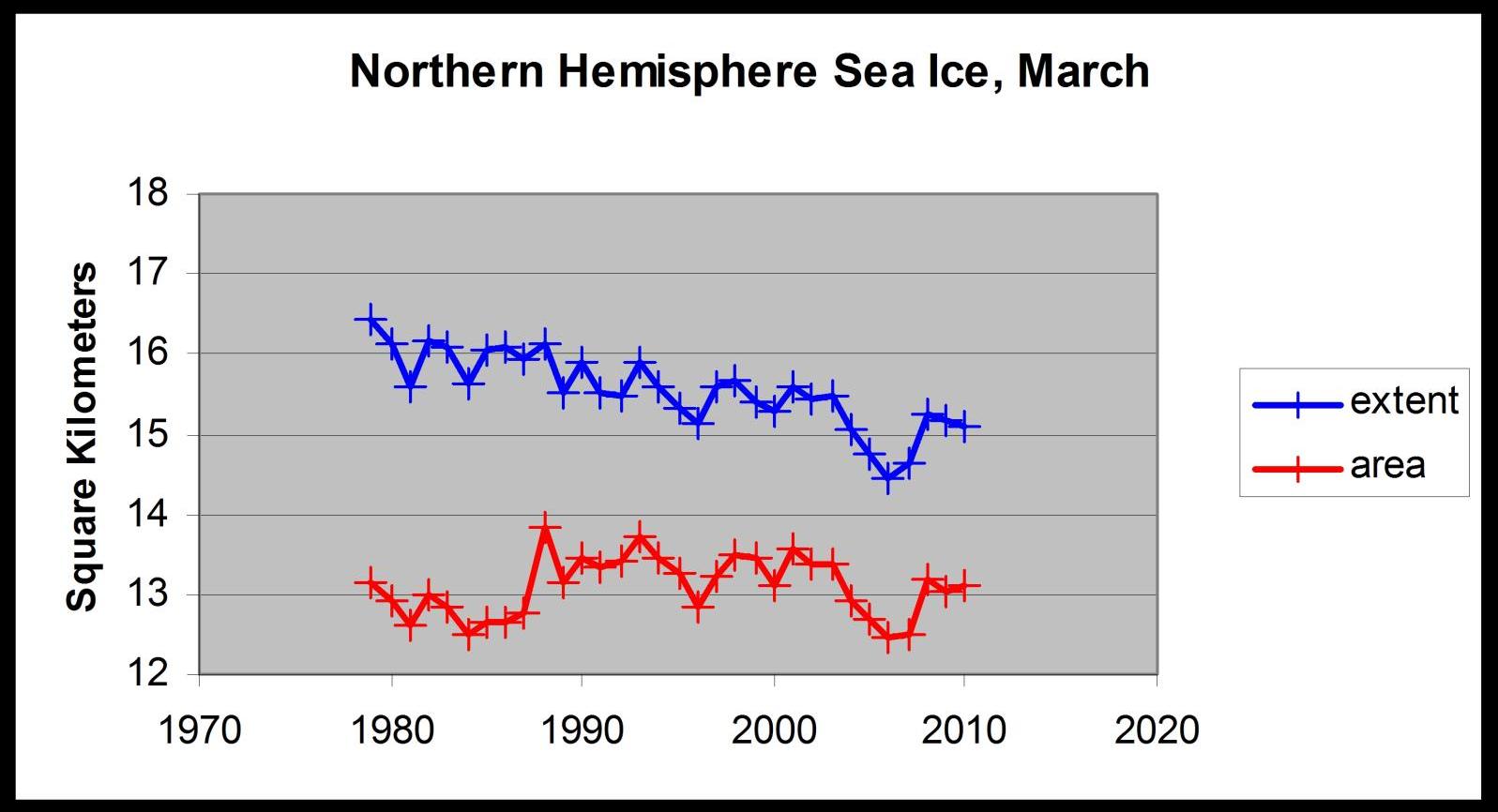 Using the raw data from the NSIDC, I was able to reproduce its results for "extent." My calculations using the raw data showed a decline of 2.6% per decade, just as the NSIDC said. So far, so good (or bad, depending on your point of view).
However, the "area" is a different story. Just by eyeball, no trend is apparent. In fact, calculations say that the ice is growing 0.3% per decade!
That is simply astounding. The Arctic sea ice that is actually measured by imaging sensors is growing, not shrinking at all. Shout it from the rooftops: We are saved!
Actually, the rate of growth is statistically insignificant, meaning that a statistician would say that it is neither growing nor shrinking; it just bobs up and down randomly. More good news: no coming ice age, either.
All the above data were only for the month of March. What about other months? I tabulate below the growth rates (% per decade) for each of the months of the year.
Northern Hemisphere Sea Ice Growth by Month, 1978-2010
As a Percentage of the 1979-2000 Average

You see that "extent" always shows more shrinkage than "area" does. In the months of maximum sea ice, February and March, the area trend is upward. And for winter months generally, December through May, any trend in area is statistically insignificant. For summer months, July through October, the trend is downward and statistically significant.
Katie Couric should have used the month of September as her example. In three decades, the Arctic sea ice "extent" shrank by 34%. She could make such claims while stating, truthfully, that the data come from NSIDC/NOAA and the trend is statistically significant. It's science.
If she had wanted to stretch the truth even further, she could have compared September of 1980 (extent of 7.85 million sq km) to September of 2007 (extent of 4.3 million sq km).  That's a decline of 45%, almost half! (Katie needs a better cherry-picker.)
Let's look more closely at those summer months.  Below is the graph for September, the month showing the most shrinkage. 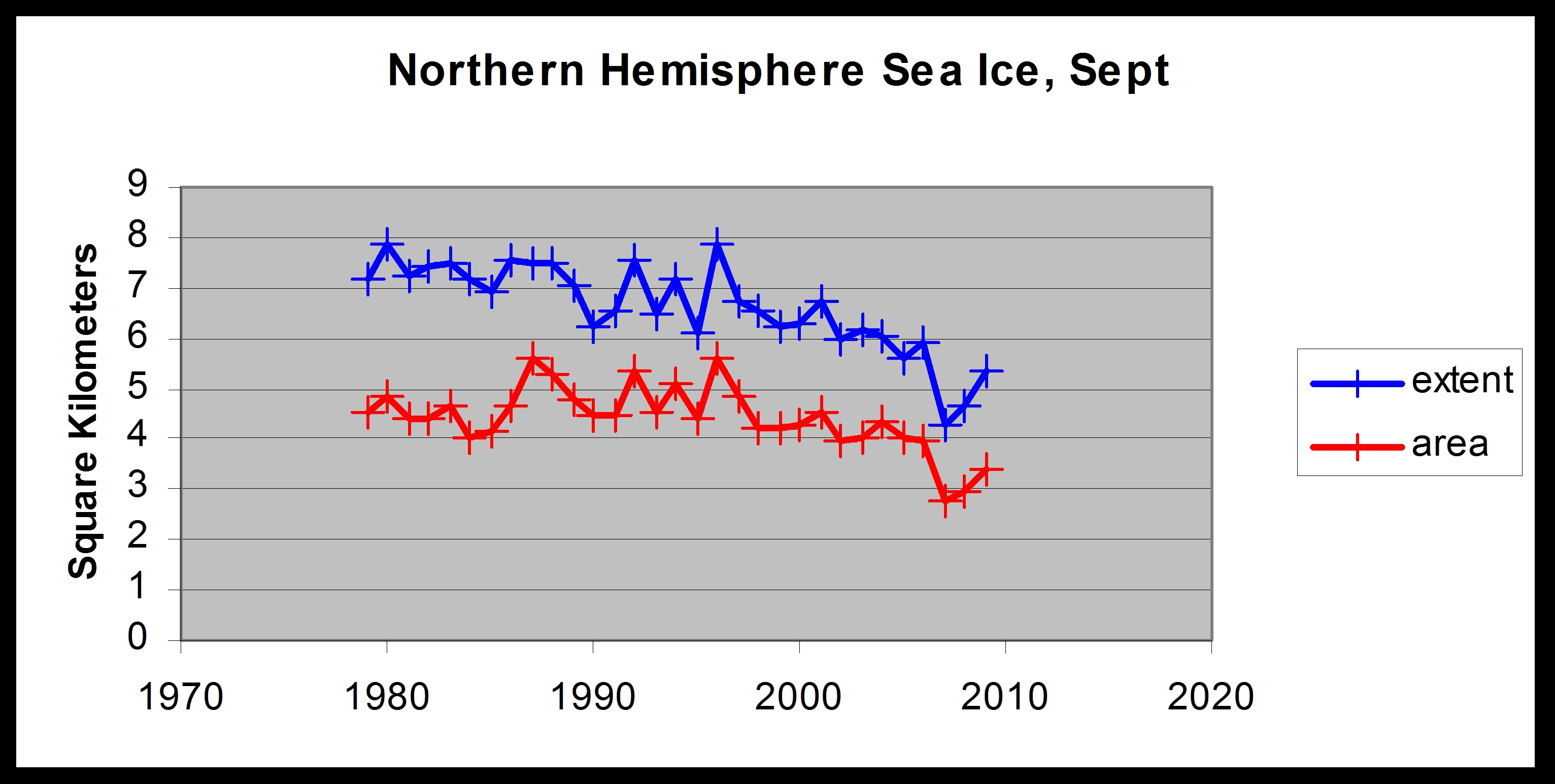 Again, the red line represents "area," the only thing actually measured.  A downward trend is evident to the eyeball. But look closely and that downward trend is fairly recent -- say, since 2000. Indeed, the calculated trend was slightly upward through 2001. That is, the entire decline is explained by measurements since 2002, a timespan of just eight years.
We are told by climate scientists themselves to ignore short-term anomalies. If we do, then even the more alarming ice cap shrinkage numbers, which were for only the summer months in the first place, disappear as well; they are short-term blips. In fact, September's sea ice area has gone up in the most recent two years of data.
Moreover, the verb "measured" is overly simplistic. The numbers result from computer algorithms working with satellite images. The NSDIC has a section of its documentation called "Error Sources."

There are a number of algorithms in use that convert channel brightness temperatures to sea ice concentration. All perform slightly differently under varying weather and ice conditions. Relatively few papers were published that compare algorithms or compare results with validation data ... In summer, passive microwave overestimates open water by a larger amount, as the instrument cannot distinguish open water between ice floes with melt ponds on the floes, and other factors such as the ice-snow interface come into play (Comiso and Kwok 1996) and (Fetterer and Untersteiner 1998). This makes it difficult to interpret trends and anomalies for the summer months.

Well how about that? The very months where we found the most apparent shrinkage were the months in which it is most "difficult to interpret trends and anomalies" and where the error would tend to underestimate ice.
This little Northern Hemisphere sea ice example captures so much of the climate change tempest in microcosm.

And all this was only for the north polar ice cap.  The south one was more obviously growing over the last three decades. The Katie Courics of the world completely ignore that one.
And remember, even if we could clearly show that the planet is getting warmer, we would still need to show that such warming is bad, that it is caused by man, and that the best cure is drastic cuts in fossil fuel usage. We are not even through step one of such an analysis.
By the way, I have not received a penny from Big Oil. But Big Oil can contact me at randall.hoven@gmail.com.

Update: There is a better explanation of the difference between "extent" and "area." "Extent" is the area of all the little chunks of area (about 600 sq km each) that are at least 15% ice. In effect, this "rounds up" each little chunk that is over 15% ice to be counted as 100% ice.  (And rounds down any chunk that is less than 15% to 0%.)

"Area" is the actual area of all ice sensed by satellite, whether it is part of a chunk that is at least 15% ice or not, and no rounding up or down.  To me, "area" is a better measure of total sea ice.  In both cases, poorly validated computer algorithms determine the ice concentration, or how much of a little chunk of area is ice.
There was no downward trend in measured "area" for winter months. However, the size of the "pole hole" changed in 1987. The pole hole is the area not seen by the sensing satellite and therefore not included in "area." Satellites were switched in 1987. The earlier satellite left out 1.19 million sq km, and the later one left out 0.31 million sq km, per assumption.
If we add the "pole hole" back to the measured "area," we would get a downward trend in area due to the change in pole hole size in 1987. If we assume that the pole hole is 100% ice, then the downward trend in March would be 2.2% per decade. But if we assume that the pole hole is only 15% ice (the low end of what is assumed), then the downward trend is only 0.1% per decade, which is not statistically significant. (The corresponding downward trend for "extent" was 2.6% per decade.)
It is true that whatever downward trend there is for March is due only to these adjustments (assumed pole hole size and concentration). And whether that trend is statistically significant depends on ice concentration in the "pole hole," an assumed value.

We implied that raw sea ice data might have been adjusted for other than scientific reasons.  Upon further review, all assumptions and adjustments made by NSIDC or NOAA appear justified on scientific grounds.

The article as originally published was based on a trend analysis of NSIDC's raw "area" data for northern hemisphere sea ice.  The raw data do not include the "pole hole", or the zone not imaged by satellite.  Since the size of the pole-hole changed significantly in 1987, any trend analysis of the raw data spanning that year is misleading.

An "update" to the article was added later, appearing online about noon on the day of publication.  The update was, for the most part, technically correct, but still misleading.  The update correctly noted that to account for the pole-hole, some assumption of its ice concentration must be made.  But since the pole-hole is the zone nearest the North Pole, it is reasonable to assume it is nearly 100% ice in March.
The NSIDC expressed sea ice shrinkage in terms of percentage change, from the 1979-2000 mean, per decade.  For "extent" that trend was -2.6% +0.7% for March.  For "area" (with pole-hole included, and assuming the pole-hole is 100% ice), the corresponding trend was -2.2% +0.7%.  In both cases, the trend was downward, statistically significant and about the same magnitude.  (In fact, as long as the pole-hole is assumed to be at least 50% ice, the trend would be downward and statistically significant.)

This issue was addressed at Watts Up With That?

"The extent/area data is adjusted - but correctly.  Comparing this to ‘CRUgate shenanigans' doesn't seem appropriate."

We concur.
Also, the article's "update" mischaracterized "area" by saying it is "the actual area of all ice sensed by satellite, whether it is part of a chunk that is at least 15% ice or not."  In fact, "area" does not include those chunks with less than 15% ice.

Randall Hoven can be contacted at randall.hoven@gmail.com or via his website, randallhoven.com.
|