Warning: mysqli_free_result() expects parameter 1 to be mysqli_result, bool given in /var/www/html/americanthinker/admin/common/functions/func.general.php on line 126
 The Left's Ludicrous Accusations against Tea Partiers - American Thinker
| 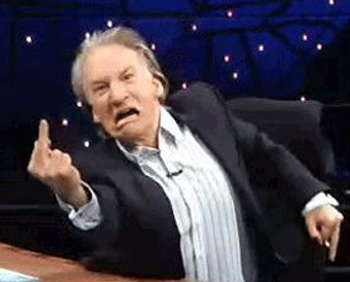 as a stark visual testimonial to the Left's true nature. Every day, the Left shows us with their own actions that they are exactly what they accuse conservatives and tea partiers of being.

It is astonishing that they have the gall to accuse anyone of anything. People who live in glass houses shouldn't throw stones. But then we remember that the smear and the lie are all they have. As a post at Powerline relates, "It is liberals, not conservatives, who rely on ad hominem attacks, outrageous allegations and violent imagery." The accusations of racism and threats of violence put forth by congressional Democrats since Saturday are straight out of the Alinsky playbook. They probably made the calls themselves.
Thank God for talk radio and the internet. Thanks to the New Media, Democrats can no longer do these things with impunity. As Andrew Breitbart says, "The emperor has no clothes." The Left is being exposed for the empty fraud of a movement it is, and as that happens, they are getting increasingly desperate. Yes, we do have to worry about violence. From them. But this is nothing new, either.
Powerline describes the 2008 Republican convention in Minneapolis, where Leftist protesters

... threw bricks through the windows of buses, sending elderly convention delegates to the hospital. They dropped bags of sand off highway overpasses onto vehicles below. Fortunately, no one was killed.

As Noel Sheppard relates, the media were AWOL.
Here is a list of representative Leftist misbehavior:

Mere days ago, a Leftist Astroturf group of union activists threw eggs at a tea party bus entering Searchlight, Nevada -- hometown of Senate Majority Leader Harry Reid. They also cornered Andrew Breitbart, physically threatened him, and then called police, accusing Breitbart of throwing the eggs. He related the event to two San Francisco Chronicle reporters who hitched a ride with him. Here's the video.
Recall the SEIU thug who beat up a black reporter at a town hall rally in Missouri last summer. Recall that he was called "nigger," and that the thug was arrested. Somehow the AP missed all that.
Recall the Arizona town hall meeting where MS-NBC reported that some white racist was carrying an "assault weapon," except that that white racist happened to be black. Somehow they missed that, too.
Following is a rundown of anti-GOP incidents from the 2004 presidential election. We gratefully acknowledge the late Clifton T. Sharp of Clifto.com for compiling the list. It came from a post titled "Identifying the Good Guys, Notes for Election Fence-Sitters." I will preface the list with Cliff's insightful counsel:

More often than not, if you see a pattern of violence from one side, they're the bad guys. They're the ones who can't make their side rise above the other through merit, so they try to make the other side fall by violence and intimidation. It is nearly always true that the side that resorts to violence has no other method for achieving its goal. They cannot make good things happen for their side, so they make bad things happen to the other side.
Whenever there is a difference of beliefs, reasonable men can agree to reasonably disagree. It follows that those who resort to violence in an attempt to force their beliefs on others, or to stop others from expressing their beliefs, are not reasonable men. They do not believe in free speech; they want you to know that they will hurt you to stop you from exercising your rights to free speech.
When there are a few incidents among a very large group, such as a political party, it's hard to blame the entire group. But when violence is frequent and widespread, it becomes a policy rather than an aberration. It becomes an indication that the violent side believes it cannot reasonably persuade others to their beliefs, but instead must use force and intimidation to deter others from exercising their rights as citizens of the United States of America.
Thousands of years ago, ancient philosophers taught that one can distinguish the good guys from the bad guys by their actions. That advice still holds true. The bad guys are running organized attempts to disrupt and to harm their opponents, to frighten people like you so that you won't vote for the good guys. When you make your choice, try not to give them what they want.

October 13, 2004: A Kerry Supporter Caught Stealing A Bush Sign In Cape Girardeau, Missouri, Pulled A Knife On The Signs Owner And Was Arrested. (Linda Redeffer, "Cape Man Claims He Was Threatened At Political Rally," Southeast Missourian, 10/16/04)

October 13, 2004: Signs Ripped Down At Nashua, New Hampshire, Victory 2004 Headquarters; Perpetrators Swore At Headquarters Staff When They Tried To Replace The Signs.

October 11, 2004: Missouri Yard Signs Shredded With A Knife, Burnt And Discarded Behind A Building.

October 10, 2004: Threatening Note Found On Elderly Veteran's Bush-Cheney '04 Yard Sign In Ballwin, Missouri, Saying "You Vote For Bush, Then Later Down The Road You Die," Adding "You Will Burn In The After Life For The Suffering And Pain That Your Vote Will Cause Me."

October 9, 2004: Oxnard, California, Support Placing Bush-Cheney '04 Yard Signs Knocked Down And Had All Her Signs Stolen.

October 5, 2004: Protestors Storm, Ransack Bush-Cheney Headquarters in Orlando, Florida. "Local 6 News reported that several people from the group of 100 Orlando protestors face possible assault charges after the group forced their way inside the Republican headquarters office. While in the building, some of the protestors drew horns and a mustache on a poster of President George W. Bush and poured piles of letters in the office, according to the report." ("Protestors Storm, Ransack Bush-Cheney Headquarters in Orlando," Local 6 News, 10/5/04)

October 3, 2004: Burglary at Thousand Oaks, California Victory 2004 Headquarters Where A Bush-Cheney '04 Banner Was Stolen From Outside The Premises.

October 1, 2004: Laptops Of Executive And Field Director Stolen From Bush-Cheney '04 Headquarters In Seattle, Washington. "Three computers loaded with confidential campaign plans were reported stolen early yesterday in a burglary at President Bush's Washington state campaign headquarters. Someone threw a rock through a window of the campaign's office in a suburban business park, taking laptops belonging to key campaign workers from the desk of the Bush campaign's state director, Bellevue police and Republican Party officials said." (David Postman And Ashley Bach, "3 Computers Are Stolen From Bush Campaign Office," The Seattle Times, 10/7/04)

September 28, 2004: Vandalism Against Springfield, Missouri Victory 2004 Headquarters Where Perpetrators Broke Bottles And Spit On The Headquarters And Wrote The Anarchy Symbol On The Sidewalk With Chalk

September 3, 2004: Windows Broken, Anti-Bush Messages Scrawled At Gallatin County Republican Headquarters. "The headquarters of the Gallatin County Republicans was vandalized early Friday morning in a crime one Republican called an 'act of terror.' An unknown vandal or vandals spray-painted peace signs on the windows and anti-Bush messages on the outside walls. A rock was thrown through a double-paned window next to the main entrance to the building, and the front door was coated with eggs and possibly cottage cheese." (Walt Williams, "GOP Headquarters Vandalized In Political Protest," Bozeman [Montana] Daily Chronicle, 9/4/04)

September 2, 2004: Gun Shot Fired Into Huntington, West Virginia Headquarters. "The Secret Service was contacted Friday to help investigate a shot fired at the Cabell County Republican headquarters in Huntington. Supporters of President Bush had gathered at the 4th Avenue headquarters Thursday night to watch the president accept his party's nomination. About two minutes into the speech, someone fired a shot through the front window of the building." ("Few Leads In Shooting At GOP HQ," wowktv.com, 9/2/04)

July 2, 2004: Windows Broken At Morgantown, West Virginia Headquarters.
Note that you will not find a similar list for vandalism against Democrats. I'm sure that there must have been some. Being confronted with people who routinely attempt to steal elections, people who even have billionaires creating professional organizations with the goal of systematically stealing elections while elected officials give them cover, and people who spew hatred everywhere they go while accusing the other side of hate and getting a free pass from the press while they're at it, it is understandable that some real Americans might have lost their patience and pulled up a yard sign or two.
But the truth is that that kind of behavior just is not in us. We were born and raised to be decent. We were born and raised to be self-supporting. We were born and raised to chip in and help out when we can. We were born and raised to be respectful of our institutions and our elected officials of both parties -- at least until they turned against us. In other words, we were born to be Americans, and the Left vitriolically hates us for it. It is a pity that they don't see that their cowardly, despicable, nihilistic behavior ultimately spells ruin for them as well.
I was at the 9-12 Rally. Not only were most of the people there the kind who would help granny cross the road, but many were grannies themselves -- some in wheelchairs. That the Left is systematically trying to smear such great people just demonstrates what cockroaches they really are.
|