Warning: mysqli_free_result() expects parameter 1 to be mysqli_result, bool given in /var/www/html/americanthinker/admin/common/functions/func.general.php on line 126
 The Fed Did It, Says Bob Mundell - American Thinker
|

The Fed Did It, Says Bob Mundell

By Christopher Chantrill
Who really was to blame for the bank meltdown in 2008? Nobel laureate and economist Robert Mundell, supply-sider-in-chief and China's new Confucius, is unequivocal.
In a speech at the Heritage Foundation on April 16, 2010, he blamed the U.S. Federal Reserve (Mundell's speech starts at 1:13:30).
Incredibly, in 2008, leading up to the worst economic banking crisis in history, the Fed was deflating the money supply -- not, as it thought, supplying lots of lovely money to bail out the banks.
It just goes to show: The Federal Reserve Board, playpen of political hacks for almost a century, really doesn't have a clue what it is doing.
That's why in the period between 1929 and 1933, the Fed caused the biggest depression in U.S. history. And in 2008, it staged the biggest financial meltdown in world history.
How bad does it have to get before Americans decide that some things are just too important to be left to politicians and their hangers-on?
Mundell's argument is fairly straightforward. When interest rates are low and borrowers are de-leveraging at full speed, you can't rely on a Friedmanite analysis of monetary conditions. (Yes, he gently sticks a knife into Milton's ribs a couple of times.) Instead, you must use a Mundell approach. And Mundell showed his audience the data that showed why the Fed was slamming on the brakes in 2008, even while it thought it was easing. The gold price was going down through most of 2008, and consumer price inflation went from five percent to zero percent in six months!
In the video, you can see Mundell waving his hands at a chart on the wall and at the display of his laptop which shows gold prices, Euro exchange rates, and consumer prices. Unfortunately, the viewer doesn't get to see any of that. The Heritage camera stays on Bob. So I have prepared a chart with the requisite data from x-rates.com, kitco.com, and bls.gov, and I have normalized the numbers so that they start at January 2007 at 100. You can see that the chart is pretty devastating. 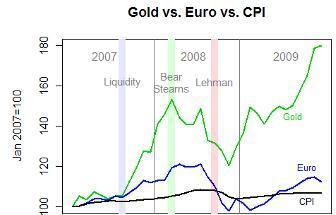 The story starts out pretty well. In August 2007, financial firms all over the world experienced a sudden liquidity crisis (the blue band on the chart). The Fed turned on the monetary faucet, and the gold price shot up to about $950 per ounce (150 on the chart). Good Fed. Consumer prices increased, too. But then, somewhere in early 2008, things went wrong. After the Bear Stearns bailout in March (gray band), the gold price started actually declining, meaning that monetary policy was tightening. Bad Fed. By the September 2008 meltdown of Fannie, Freddie, and Lehman Brothers (pink band), the gold price was in free-fall, meaning that monetary policy was bar-tight. Very bad Fed. It took 'til November 2008 before the Fed got a handle on things and got the monetary spigot open again. No wonder President Bush was moved to warn that "If money isn't loosened up, this sucker could go down."
You have to say, What is the point of appointing these clowns to operate the central bank, the "lender of last resort"? They know nothing and they do nothing. Here's Federal Reserve Chairman Ben Bernanke, the world's foremost deflation expert, and what does he do in the crunch? He runs a tight deflationary monetary policy right through the most critical financial crisis in modern history.
What's the point of a government if it can't even do the job of lender of last resort?
Bob Mundell has a very mild-mannered way of making a speech. But he also has a way of modestly slipping Bob's Greatest Hits into his remarks, as in the eight-year U.S. expansion from 1982 to 1990, followed by the ten-year expansion from 1991 to 2001. In particular, he's rather proud of the 31-year expansion in China.
Given the astonishing economic record in China, you can understand why they have named a university after Bob in Beijing. It's called the Mundell International University of Entrepreneurship.
Now let us get back to the chart. There is something that jumps out at me. The stock market turned and started up in March 2009, which is just about when the Fed got the gold price back to $950 per ounce (150 on the chart). That represents a dollar devaluation of about 30 percent from the gold price of $665 immediately before the August 2007 liquidity crisis.
Let's do a bit of Monday morning quarterbacking and guess that a 30-percent dollar devaluation in 2007-2008 is what it took to get the credit system floating again. But starting in September 2009, the gold price started rising again. That means that the Fed probably started supplying too much money to the credit system. Today, with gold north of $1,100 per ounce, the dollar is effectively worth 40 percent less than it was in August 2007.
Anyone want to guess what that spells? Making a wild guess, I'd say it spells I-N-F-L-A-T-I-O-N. Thanks for the tip, Bob.
Christopher Chantrill is a frequent contributor to American Thinker. See his roadtothemiddleclass.com and usgovernmentspending.com.  His Road to the Middle Class is forthcoming.
|