By Cat Corben
Reading the story about President Obama breaking tradition and ditching the presidential press pool over the weekend to watch one of his daughter's soccer games, it appears harmless, right? Not so. It is rather disturbing when you dissect it. So let's do just that. According to the Chicago Sun Times, the press pool was to assemble at 11:30AM.
However, Time reported:

The president left the White House at approximately 9:20 to attend one of his daughter's soccer games at 40th and Chesapeake NW. A pool was hastily called at around 9:35 and drove north at 9:43 to catch the president before the game ended. We didn't make it. The President returned to the White House at 10:17. The pool returned at 10:30.  We now return you to your regularly scheduled pool call time.

Seems simple enough. But the story has several problems. The first one is a biggie in that there were no scheduled soccer games for Sidwell Friends April 10, as evidenced here. The second is that the area reported that the game was played at appears to be one of high crime, as documented here and here. [Update: reliable reports from DC residents indicates the area is not high crime - ed.] Additionally, this is a picture of the field via Google Maps, where Obama went to watch the game. 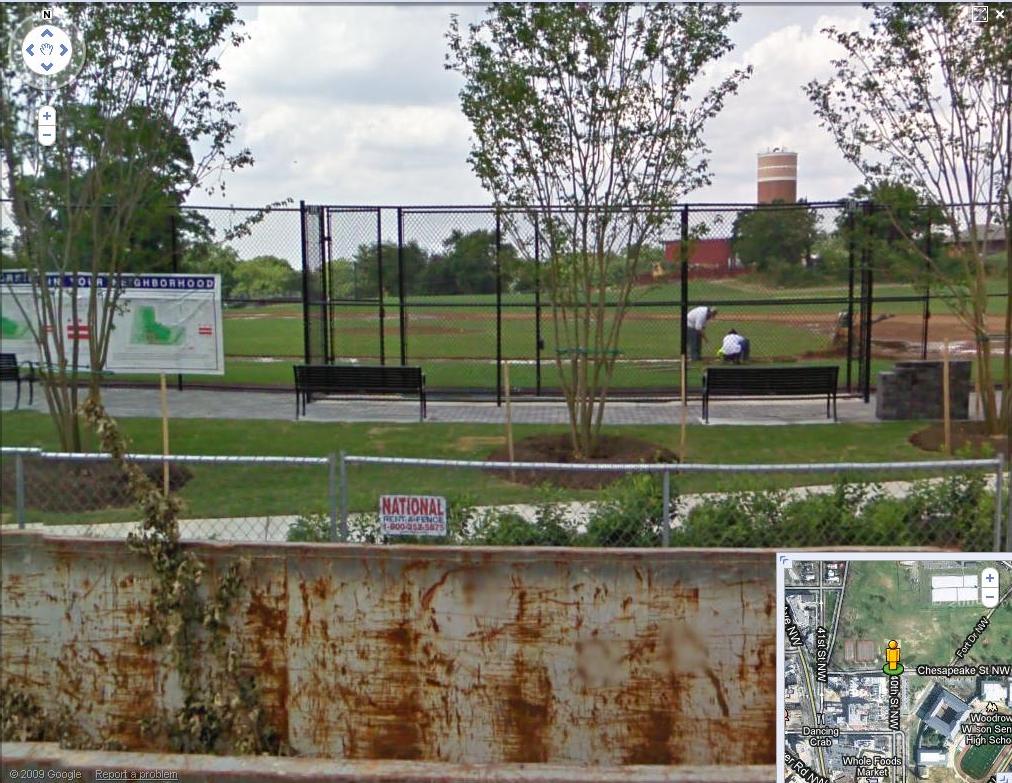 Another problem is that when the press pool got close to the reported location, they were told that Obama was leaving and to turn around. The press pool complied, but why? Wouldn't they have wanted a photo of him, even leaving the event, to formally document his whereabouts? What's also suspect is the very casual, nothing-to-see-here tone of the Time article.
Something is most definitely wrong. The President of the United States venturing out to a soccer game that didn't exist in a high-crime area. The Politico is also reporting that Obama acknowledged the problem with his actions:

Prior to Obama's bilateral meeting with Pakistan Prime Minister Yousaf Raza Gilani, Obama told his colleague, "Apparently I caused quite a problem," adding something about his secretary not telling the Secret Service, according to, ironically enough, the pool report.

What's more concerning is that no one can confirm if the Secret Service even accompanied Obama on his adventure. Furthermore, let's look at the elapsed time. If the president left the White House at 9:20AM as reported, according to Mapquest, it takes about sixteen minutes to get from the White House to 40th and Chesapeake NW, bringing his arrival time to the field at 9:36AM or so. But then he would have had to leave the field at the latest at 10:00AM to return to the White House at the documented time of 10:17AM. So he spent about twenty minutes at the game? When did the game end? That time is vague as well.
With all of the technology that people have -- iPhones, Blackberries -- not one person took a photo of Obama? And the press didn't get a shot of him getting into his vehicle? Obama loves the cameras, and this is what he looks like at his daughter's soccer game.
Even three days later, there are still no pictures of the president from Saturday's game. The USA just disarmed to Russia, Poland's president and 95 others were killed hours before, and there were many international leaders in Washington, D.C. for the nuclear summit set to begin on Monday, April 12.

And we shouldn't raise even more questions on his whereabouts? According to the MSM, the answer is yes.

Update: The Stoddert Soccer League (club soccer, not school soccer) had matches at the same park on April 10th. See the schedule here: http://www.stoddert.com/docs/STODDERT_2010_Spring_U12_FINAL_-_Rev_1.pdf. Note that the first match is scheduled for 10 AM, which is the time the President would have had to leave the match to return to the White House at the time he did. The estimable Tom Maguire suspects that the 9 AM match was scrubbed from the schedule.
|