Next Earth Day, Thank a Hunter

"In 1970, a Senator from Wisconsin named Gaylord Nelson raised his voice and called on every American to take action on behalf of the environment," reads President Obama's Earth Day proclamation. "In the four decades since, millions of Americans have heeded that call and joined together to protect the planet we share."

Well, I've got news for our president. Millions of Americans who had never heard of Gaylord Nelson "took action on behalf of the environment," decades before the good senator "raised his voice." More newsworthy still, most of these belonged to those insufferable rustics who "cling to guns and bibles." To wit:
The Pittman-Robertson Act (1937) imposed an excise tax of 10 percent on all hunting gear. Then the Dingell-Johnson act (1950) did the same for fishing gear. The Wallop-Breaux amendment (1984) extended the tax to the fuel for boats. All of this lucre goes to "protect the environment" in the form of buying and maintaining National Wildlife Refuges, along with state programs for buying and maintaining various forms of  wildlife habitat.
For the last couple of decades, hunters and fishermen have contributed over $1.5 billion per year toward Senator Gaylord Nelson's lofty goal. To date, hunters and fishermen have shelled out over $20 billion "on behalf of the environment." A study by the National Shooting Sports Foundation found that for every taxpayer dollar invested in wildlife conservation, hunters and fishermen contribute nine. 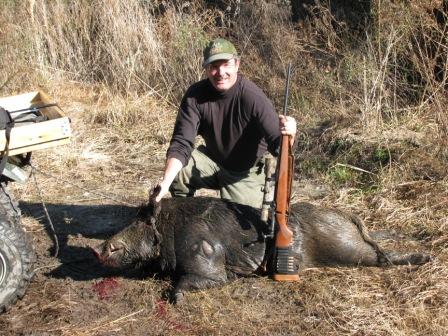 So please note: To "preserve nature," they don't tax Birkenstock hiking boots and Yin-Yang pendants -- but do tax my shotgun. They don't tax Yoga manuals and Tofu tidbits wrapped in recycled paper -- but do tax my 30.06 deer rifle. They don't  tax binoculars or birding field guides with cutesy photos of the red-cockaded woodpecker and spotted owl -- but do tax the shotgun shells I blast at Mallards before arraying them on my grill as Duck-K-Bobs (cooked rare and lovingly basted with plenty of butter, Cajun seasoning, and teriyaki sauce).
Going further, they don't tax Kayaks and rock-climbing picks and ropes -- but do tax my compound bow and rifle scope. They don't tax the plastic water bottles on mountain bikes (or the mountain bike itself, come to think of it) or the cutesy spandex shorts these yo-yos wear -- but do tax my duck decoys and camo pants. They don't tax Yanni and Enya CDs -- but do tax the arrows I fling at Bambi before he sizzles on my grill as Bambi-burger (lovingly draped with thick bacon slices that dribble their appetizing fat into the meat while cooking. Then a chunk of cheddar cheese melted on top.).
You talk about a "Cheeseburger in Paradise," Jimmy Buffet! Try one from Bambi!
Ten cents of every dollar I spent on my hunting and fishing toys (I'd cite the total, but my wife might read this) funds federal and state "conservation" programs. From my guns and ammo to my duck calls and decoys, from my rods and reels to my lures and gaffs, from my trolling motor to the very fuel for my outboard -- ten cents of every dollar in this ghastly expenditure funds habitat for spotted owls, red cockaded woodpeckers, bald eagles, ospreys, manatees, snail darters, black-footed ferrets, California condors, Florida panthers, and sea otters.
None of these creatures (from what I hear) makes a decent gumbo or even a passable chili. I must be crazy. But I have no choice. And this avalanche of tax dollars comes on top of those I fork over for the stacks of licenses and permits and stamps I'm required to have before I set a foot afield or set my boat afloat. Last season, these totaled $500. (But sweetie! There are huge fines for hunting and fishing without them!)
And all the above is on top of my voluntary dues and assorted donations to such as Ducks Unlimited. (But snookums! I thought you loved the duck print I brought home at 2: 45 AM from the DU Banquet/auction! And especially the picture of me with the nice Hooters girl who worked the keg in her camo bikini!) According to the National Shooting Sports Foundation, these donations to such as DU, Pheasants Forever, etc. total $300,000,000* a year.
As mentioned, just last year, hunters and fishermen (not birdwatchers, not rock-climbers, not kayakers, not nature-hikers) "contributed" $1.5 billion "big ones," "dollarinies," "donuts" (to quote Steve Martin as The Jerk) to purchase and maintain places for greenie-weenies to frolic and nature-watch.
You'd think some thanks might be in order from these freeloaders -- from the smarmy crowd not forced to buy any "bird-watching stamp" or "hiking stamp," or "kayaking stamp," or "rock-climbing stamp," or Yanni-listening stamp," or "quartz-crystal-gazing stamp." You'd think that Tofu-munchers might appreciate us hunters' funding habitat for their spotted owls, kangaroo rats, snail darters and louseworts, and bankrolling the scenery on their "nature trails" as they self-righteously plod along in their "earth-friendly" Birkenstocks and granola-flecked frocks., quartz crystals rattling in their pockets en route to a hillside sunrise-worship, crystal-gaze, and Enya-listen.
We pay our way -- in fact, we pay the hikers' and bird-watchers' way, too. But rather than go afield as passive voyeurs, rather than regard nature as a Disney cartoon, we accept nature's diktats. We revel in our role as full-fledged participants in her cycle of fang and claw (but add bullets, buckshot, broadheads, treble hooks, and gaffs to the primal drama).
You'd think that the voyeurs might throw us a bone every now and then. Well, think again. Here's the Sierra Club's official position: "Wild animals should not be valued principally in terms of whether they can serve as targets. As members of the family of life, we should respect the moral right of all creatures to exist, to be free of unnecessary predation, persecution, and cruel and unduly confining captivity."
Anyway, you're quite welcome, Greenies!

*corrected, with thanks to a reader.