Warning: mysqli_free_result() expects parameter 1 to be mysqli_result, bool given in /var/www/html/americanthinker/admin/common/functions/func.general.php on line 126
 The Problem with Blaming Insurance Companies - American Thinker
|

The Problem with Blaming Insurance Companies

By Andrew Foy and Brenton Stransky
Earlier this week, President Obama addressed a crowd of gushing students and selected guests at Arcadia University in a suburb of Philadelphia to promote his final push for health care reform. It was a beautiful day for late winter, magnifying the gathered group's existing enthusiasm and after the usual "I/we love you(s)" from the crowd, the president wasted little time before turning to his usual tones of demagoguery.
A moment or two into the speech, the president characteristically accused the insurance companies of arbitrarily causing the extra inflationary costs of health care coverage and for other ills of our health care system:

See, these insurance companies have made a calculation. Listen to this. The other day, there was a conference call that was organized by Goldman Sachs. You know Goldman Sachs. You've been hearing about them, right? [Laughter.] So they organized a conference call in which an insurance broker was telling Wall Street investors how he expected things to be playing out over the next several years, and this broker said that insurance companies know they will lose customers if they keep on raising premiums, but because there's so little competition in the insurance industry, they're okay with people being priced out of the insurance market because, first of all, a lot of folks are going to be stuck, and even if some people drop out, they'll still make more money by raising premiums on customers that they keep.

This statement is absurd and disheartening because it clearly shows that the president is willing to make any claim and accentuate any fact in order to pull his health care reform hopes from the nosedive it is in. He's not alone. For years, the left and some on the right have accused the big insurance companies of inconsiderately raising the costs of insurance premiums in order to pad their pockets. The president proposes (and some unwittingly agree) that we would be better off if the government controlled the types of health care insurance provided and the cost for such coverage.
What this overly simplified argument leaves out is that the premium increases by the insurance companies are to offset the rising "benefit expenses" that they payout. Premium increases are the insurance companies attempt to stay in business.
In the same speech, the president cited an example of the exorbitant increases to premiums that affect everyday Americans:

Perhaps most people's paychecks haven't gone up 40%, but if the government runs health care coverage it will further reduce competition or eliminate it altogether. Anybody saved a ton of money on car insurance by switching companies lately? Competition is good because it forces companies to be honest, and as was seen in Hawaii, government intervention greatly reduces competition. It already has greatly reduced competition.
Anthem Blue Cross's parent company is WellPoint (the second-largest insurance company in the country), and what the president won't tell you is that WellPoint's net income dropped 30% from 2007-2008 to 4.2% of revenue, according to the 2008 annual report. This drop was the result of several factors including higher claims payouts; people are getting older, and new medicines cost more. In 2008, the largest hundred companies in the country averaged a profit margin of 5.6%.
It has been increasingly noted lately that insurance companies aren't the hugely profitable corporations they are made out to be, and we might benefit from digging into the numbers. According to Fortune, the ten largest health care insurance providers saw an average profit decrease of 52% in 2008 (the latest year for which information is available) from the year prior. In fact, the entire "Healthcare: Insurance and Managed Care" sector of the SP500 stock index ranked 33rd of 51 total sectors for total profitability in 2008. 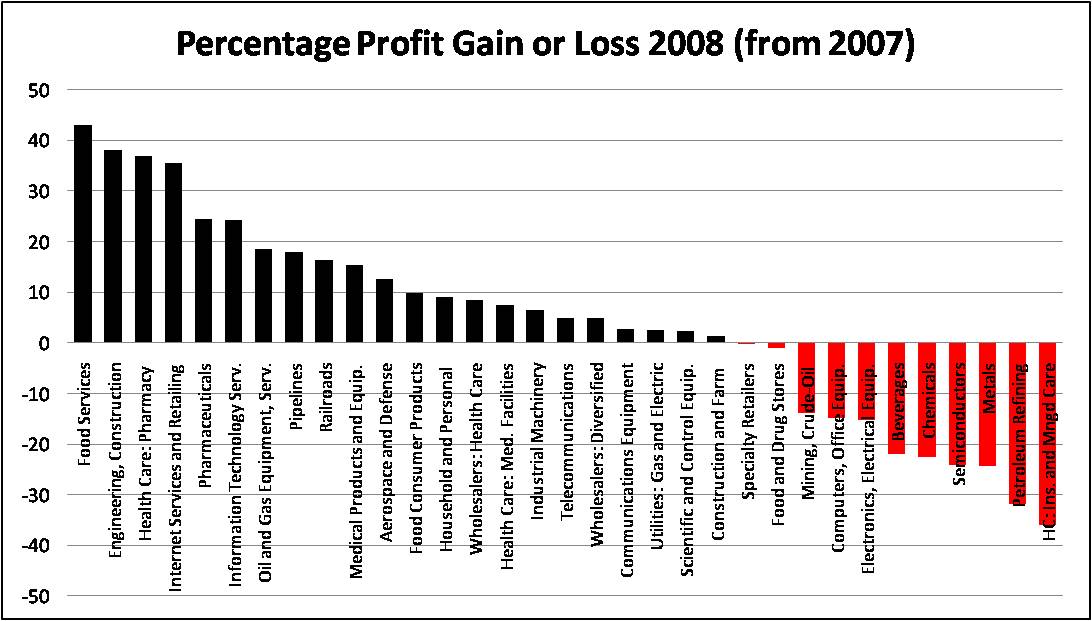 The profit level observed in the health care insurance industry in 2008 wasn't just from a bad year. In fact, the five-year average profitability numbers show that the "health care insurance industry" was only the 23rd-most profitable.
There is something at stake today greater than just the nationalization of the health care insurance industry, as dire as that is. If the government is able to successfully argue that the 23rd-most profitable industry in our country is too profitable, then they might easily argue that the 22 more profitable industry groups are too profitable as well. And at least eight of the top ten most profitable industries are in some way vital to our well-being, and as ripe for government takeover. Historically, nationalization is a slippery slope.
One of the problems with government takeovers of private industry is that the government cannot create an efficient solution like we are led to believe they can. A company like WellPoint spends roughly 80%-85% of its premiums on paying for medical expenses incurred by participants, leaving the rest for administrative costs and profit.
If the government is to effectively drive down premiums, then it would have to cover fewer participant expenses (which it has promised time and again not to do), pay less for the procedures or drugs than the insurers are paying now (which might cause a lower supply of physicians willing to take government insurance, more lines for care like in parts of Europe, or a reduction in the quality of care), or manage more efficiently the administrative costs to something less than the 15%-20% the insurance companies have. We should note that no example exists of a government organization running more efficiently than a private competitor. We should instead be aware of the sleight of hand where the government keeps health insurance premiums the same but raises taxes to pay for it.
In the end, the health care insurance providers are certainly not gouging their policyholders anymore than the food services industry is (which was the most profitable industry in 2008). It appears that as the left become more desperate to save their pet project, they are moving even farther away from substantive arguments and using even more misleading perversions of the truth -- exactly the opposite of what they promised earlier this year. But what did we expect?
Brent Stransky is a co- author of The Young Conservative's Field Guide, which is scheduled for release by Nimble Books on April 1, 2010. The authors can be contacted through their website at www.aHardRight.com.
|