The Pathetic God of Environmentalism

By Larrey Anderson
Writing, or trying to write, about God is usually a bad idea. Either there is a God or there is not. If there is no God, then there is nothing to write about. (Sorry, atheists -- but if you are right and God does not exist, then why bother spending so much time and energy on...nothing?)
If there is a God...let's start with a picture followed by a brief explanation: 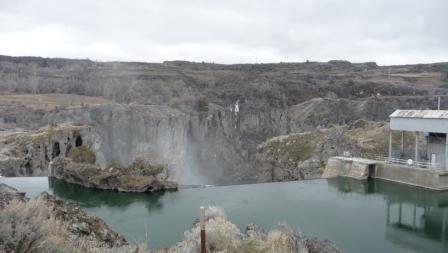 I live in the Snake River Canyon. Its rugged beauty is terrifying. A philosopher's job is to stay open-minded about all questions (including the existence of God) -- to love the truth above all else. But when I step out on my porch and try to ponder the awesome power of the existence of a Being capable of producing layer upon layer of flowing lava and water-carved granite and basalt that formed a five-hundred-foot deep canyon over millions and millions of years, I feel derisory and puny. A Being that can create with such subtle delicacy, and such unimaginable potency, resides far beyond the reach of mere words.
Just thinking about a Creator with that kind of power frightens me. I am not capable of even communicating the dread that I feel contemplating such omnipotence. Nor am I foolish enough to attempt to describe the sort of deity that could produce the majestic (and forbidding) wonder of our world and the vast complexity of the universe.
So I leave writing about God alone -- with one exception. There is one god that I am certain does not exist. It is the god of the environmentalists: Mother Earth, or Gaia, or whatever other name they choose to call their deity.
Many writers have pointed out that the global warming scam, and environmentalism in general, is a religion or a cult. What has not been done is to examine the nature of the deity of the religion.
The "god" of the religion of environmentalism is pathetic. The environmentalists' god is weak, vulnerable. Their god depends on her followers to save her. Their god is no God. And, as we will see, this tells us something crucial about the religion of environmentalism.
Look at these pictures of their god. (There are dozens of paintings and posters. Take the time to examine some of them. Compare them with the initial photo in this essay of the Snake River canyon right outside my porch.)
The god of the environmentalists has three characteristics:
1) Their god is our planet, the Earth.
2) Their god is female. She is benign, protective, and, most important, vulnerable.
3) Their god is vulnerable because of the "pollution" (most specifically, CO2 -- a naturally occurring chemical compound) produced by human beings and our modern industrial society. This defilement of the atmosphere has caused (notice the gender used in the description) "man-made global warming."
The "pledge of allegiance" to the earth, from the Oregon Country Fair, sums up all three of these characteristics: 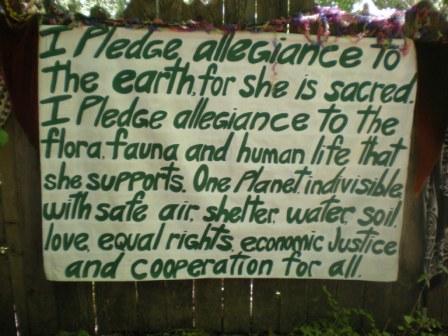 As I have previously pointed out, the human need to call upon the gods (whether male or female) to control the weather, to provide for a good harvest, and to protect us from the elements is as old as human civilization.
What has changed is that environmentalists now look to science and government to save their god from the evils of mankind. Their god doesn't have the power to fix the climate -- so they will do it for her.
Al Gore has stated that "[t]he Earth has a fever and just like when your child has a fever, maybe that's a warning of something seriously wrong."
Mother earth is like a sick child. The god of the environmentalists is a helpless victim. It is up to politicians and scientists to redeem her and to save her.
There is no doubt about the religious element that the prophet of global warming brings to the table. CBS news said of Gore, when he was promoting his film An Inconvenient Truth,

His slideshows are tailored to his audiences. For example, when he talks to evangelical Christians, he includes passages from the Bible.
Gore is trying to redefine this as a moral and spiritual issue. "We all share the exact same interest in doing the right thing on this. Who are we as human beings? Are we destined to destroy this place that we call home, planet earth? I can't believe that that's our destiny. It is not our destiny. But we have to awaken to the moral duty that we have to do the right thing and get out of this silly political game-playing about it. This is about survival," he said.

The left has given us a watered-down version of Christianity in the complementary concepts of multiculturalism and diversity. It is clear that the left is also using the eschatological underpinnings of Christianity to now sell the American people on the impending doom caused by man-made global warming.
Gore opened his 2009 book Our Choice: A Plan to Solve the Climate Crisis with this: "I'm offering you the choice of life or death. You can choose either blessings or curses.  -Deuteronomy Chapter 30, Verse 19"
Gore's hubris is so blatantly obvious that the passage needs no exegesis.
The God of the Jews is righteous and just. The Old Testament tells the simple story of what happens when God's commandments are followed and when they are disobeyed. The God of the Jews doesn't need any help. He is not a victim. He is the great "I am that I am." As Moses found out, that is all that we have been told (and probably all that we can understand) about God. That was the end of the discussion.
The Christian God is a God of love and forgiveness. But that does not mean that the Christian God is powerless and needs our assistance:

At that time the sign of the Son of Man will appear in the sky, and all the nations of the earth will mourn.  They will see the Son of Man coming on the clouds of the sky, with power and great glory. Matthew 24:30 [Emphasis added.]

Not so with the pathetic god of the environmentalists. She is sick. She requires that we pass cap-and-trade legislation -- least she suffer even more.
The theological conclusion that follows from worshiping Mother Earth is that she is no god at all. She doesn't even have the power to defend herself from the CO2 that is emitted when we exhale.
The real gods of the environmentalists are the politicians and the scientists who believe that they can save the planet. Those who worship the environment should understand exactly who their gods are.
Larrey Anderson is a writer, a philosopher, and submissions editor for American Thinker. He is the author of The Order of the Beloved, and the memoir Underground: Life and Survival in the Russian Black Market.
|