Warning: mysqli_free_result() expects parameter 1 to be mysqli_result, bool given in /var/www/html/americanthinker/admin/common/functions/func.general.php on line 126
 Lying About Bush's Tax Cuts - American Thinker
|

By Andrew Foy and Brenton Stransky
The majority of the taxpayers in our country believe it a foregone conclusion that taxes will rise substantially in the near future and that the Bush tax cuts will soon be no more than a footnote of political history. You don't need to be a genius to see that the government will have to raise more revenue to pay for seemingly infinite spending, but before we resign ourselves to higher taxes, we should consider defending the Bush tax cuts against the left.
Two of the most oft-cited objections to the Bush tax cuts by the left are that it helped only the rich and it was largely responsible for the federal deficit at the end of the Bush presidency. Instead, it is true that if the current administration allows any or all of the Bush tax cuts to expire, economic growth will be slowed and tax revenue could actually decrease, perpetuating our deficit dilemma.
The Economic Growth and Tax Relief Reconciliation Act of 2001 and the Jobs and Growth Tax Relief Reconciliation Act of 2003 broadly lowered income, capital gains, dividends, and estate taxes. Fanning the lie that only the rich benefited, liberal economists Peter Orszag and William Gale described the Bush tax cuts as reverse-government redistribution of wealth, "[shifting] the burden of taxation away from upper-income, capital-owning households and toward the wage-earning households of the lower and middle classes." This criticism stuck so well that it is difficult to find a liberal today who doesn't believe that these tax relief measures were anything more than "tax cuts for the rich."
But the data does not support this conclusion. According to the non-partisan Congressional Budget Office (CBO), the Bush tax cuts actually shifted the total tax burden farther toward the rich so that in 2000-2004, total income tax paid by the top 40% of income-earners grew by 4.6% to 99.1% of the total. 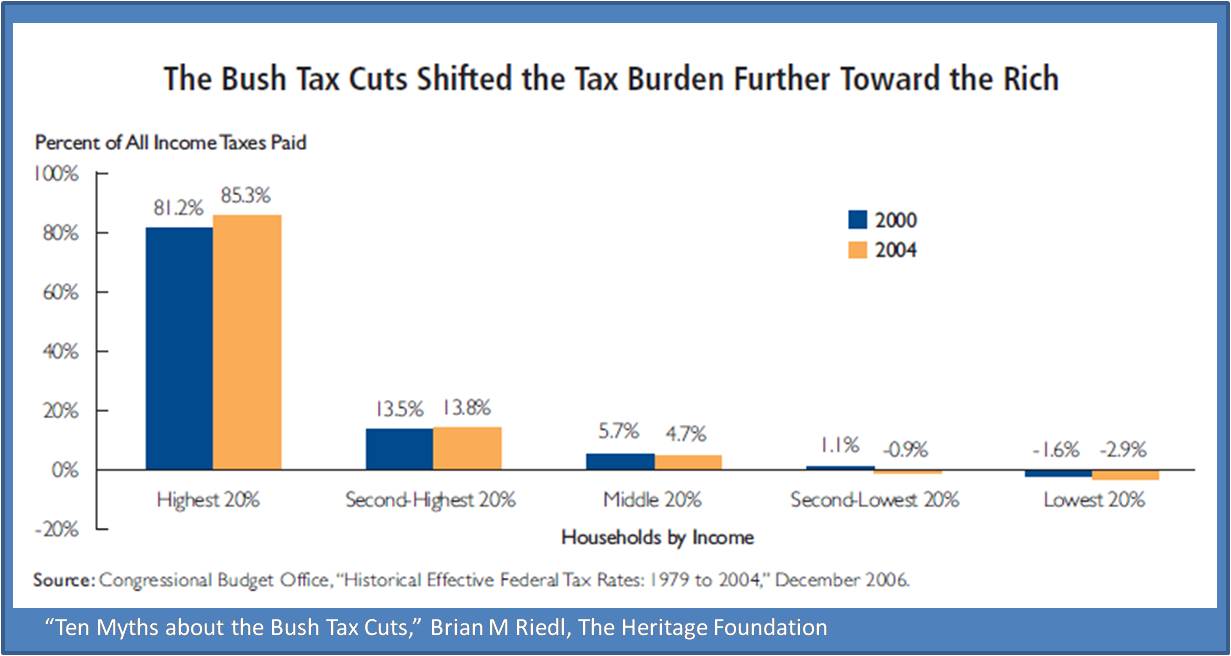 This shift may have occurred because as the wealthy (who are arguably the most industrious and productive citizens) are better-incentivized to be industrious and productive through lower taxes, they create higher incomes for themselves and end up paying more taxes. The Bush tax cuts did shift the tax burden, but not in the direction most liberals think.
The second major misconception spread by the left about the Bush tax cuts is that the lower tax rates caused the federal deficit woes we face today. Keeping with the party line of blaming the previous administration for all of today's problems, Speaker Nancy Pelosi (D-CA) quipped in a news conference on January 8 of this year: "Let me just say that the tax cuts at the high end ... have been the biggest contributor to the budget deficit." Of course, the Speaker would have us believe that overspending has nothing to do with our deficit.
In fact, the Bush tax cuts actually increased government revenue. According to economist Brian Reidl of the Heritage Foundation, The Laffer Curve (upon which much of the supply-side theory is based) merely formalizes the common sense observations that

If policymakers intend cigarette taxes to discourage smoking, then they should know that high investment taxes will discourage investment and income taxes will discourage work. Lowering taxes encourages people to engage in the given behavior, which expands the base and replenishes some or all of the lost revenue. This is the "feedback effect" of a tax cut.
The following figure is an illustration of the Laffer Curve. The curve postulates that two tax rates exist between the extremes of no tax and 100% tax that will collect the same amount of revenue: a high tax rate on a small tax base and a low tax rate on a large tax base. Whether or not a tax cut recovers 100% of the lost revenue depends on the tax rate's location on the Laffer curve. When tax rates are above the equilibrium point on the Laffer curve, reducing the tax rate increases revenue. 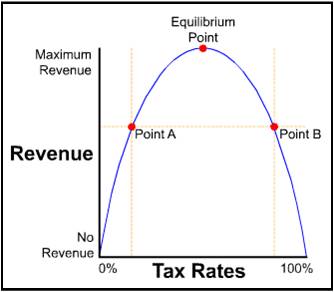 So what was the effect of the Bush tax cuts? The data reveals that tax revenues in 2006 were actually $47 billion above the levels projected by the Congressional budget office before the 2003 tax cuts. Clearly, tax rates were beyond the point of equilibrium.
The Bush tax cuts were intended to increase market incentives to work, save, and invest and thus create jobs and increase economic growth. An analysis of the six quarters before and after the 2003 tax cuts shows that this is exactly what happened. The following table from Reidl's analysis depicts these effects. 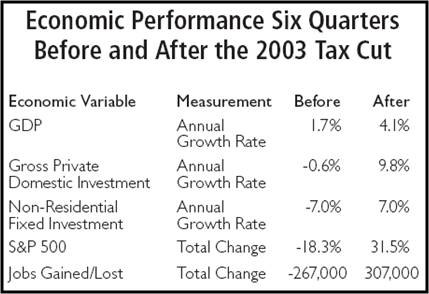 The empirical data makes it impossible to validate the liberal claims that the Bush tax cuts were "for the rich," or that they "caused the budget deficit," or that they were in any way responsible for causing this latest economic crisis. In fact, a study by economist John W. Skorburg underscores the positive effects of the Bush tax cuts. Skorburg's study found that the Bush tax cuts, which lowered the total federal tax burden from 20.9% in fiscal year 2000 to 17.9% in fiscal year 2008 and 2009, were responsible for increasing the economic growth rate. Further, the author concluded that "[i]f President Obama raises tax burdens, trend growth in real GDP will fall."
The bottom line is that tax policy has far-reaching effects, and for decades, liberals have refused to acknowledge them. The dire consequences of higher tax burdens in times of economic weakness were made most clear when FDR raised taxes in 1937, causing a double-dip in GDP that prolonged the Great Depression. If the Bush tax cuts are allowed to expire, recovery from the current crisis will likely be prolonged, and we will have no one to blame but ourselves for not observing the lessons of history.
Andrew Foy, M.D. and Brenton Stransky are authors of The Young Conservative's Field Guide and can be contacted through their website at www.aHardRight.com.
|