By Dexter Wright
In 2005, the late Dr. Michael Crichton wrote a book of fiction called State of Fear. The plot of the storyline is the exposé of the fraudulent science behind the global warming theory in the middle of a fictitious court case. The book was a bestseller, and in a strange twist of circumstances, it landed Dr. Crichton in front of a Senate committee. Now it seems that life is indeed imitating art.
In the past few years, there have been many court cases concerning the actions of governments to the alleged threat of global warming. The latest has been filed by Texas against the Environmental Protection Agency (EPA) with respect to the Endangerment Finding of Carbon Dioxide (CO2).
Texas has filed two petitions in federal court. The first is a request for review of the endangerment finding, which is intended to examine the science behind global warming. The second is a petition for reconsideration of the finding. These court cases were brought about in the wake of the Climategate scandal. Climategate has revealed that significant portions of the Inter-Governmental Panel on Climate Change (IPCC)'s Fourth Assessment Report (AR4) were based on fraudulent science.
The crux of the matter is that the EPA based the endangerment finding on the now-discredited IPCC report. To date, the IPCC have admitted to two significant erroneous claims. First, they admitted to the fact that the Himalayan glaciers are not melting away, and secondly, they have stated that the claim of the trends of natural disasters attributed to global warming is overstated. Subsequently, the IPCC have been prompted to publicly state that they are reviewing their own quality assurance procedures in light of these admissions.
But now all of this is going to be examined in a court of law. It should be noted that the laws of governments and the laws of science differ very significantly. For example, governments can repeal laws, like in the case of prohibition. By contrast, science cannot repeal the law of gravity. It is this kind of cold, hard fact that lawyers typically are not used to dealing with. If the case of Texas versus the EPA is decided on the scientific facts, as it should be, then the EPA will lose.
So what are the facts? The two graphs below show the transmittance of two gasses in the Infrared (IR) wavelength. One is CO2, and the other is water vapor (H2O). The dips in these graphs show where the two substances absorb the IR energy. Clearly, H2O absorbs more than ten times the amount of energy in the IR spectrum as does CO2. Furthermore, H2O is more than one hundred times more abundant in the atmosphere than CO2. The conclusion is that H2O is more than one thousand times as potent a greenhouse gas (GHG) as CO2.With such immutable facts facing the EPA, how will they explain their stance that CO2 is a greater danger to the public than water vapor? What's sauce for the goose should be sauce for the gander. 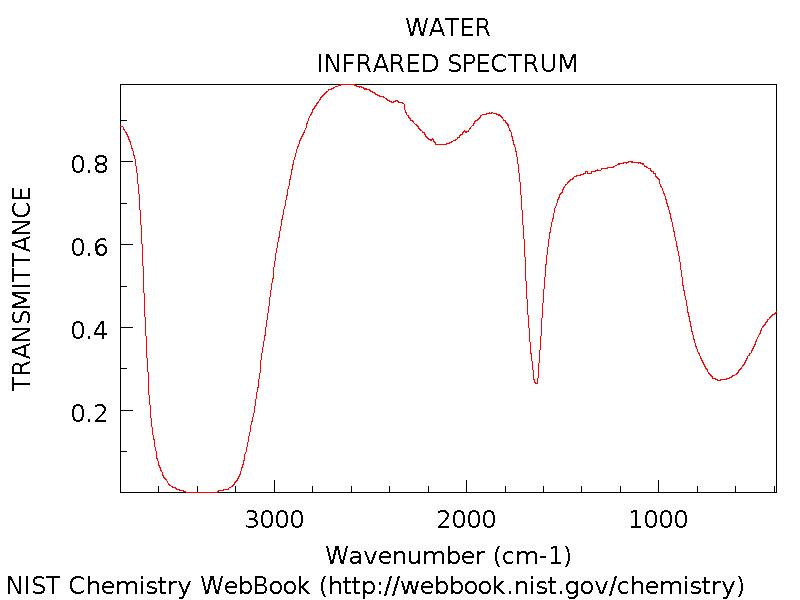 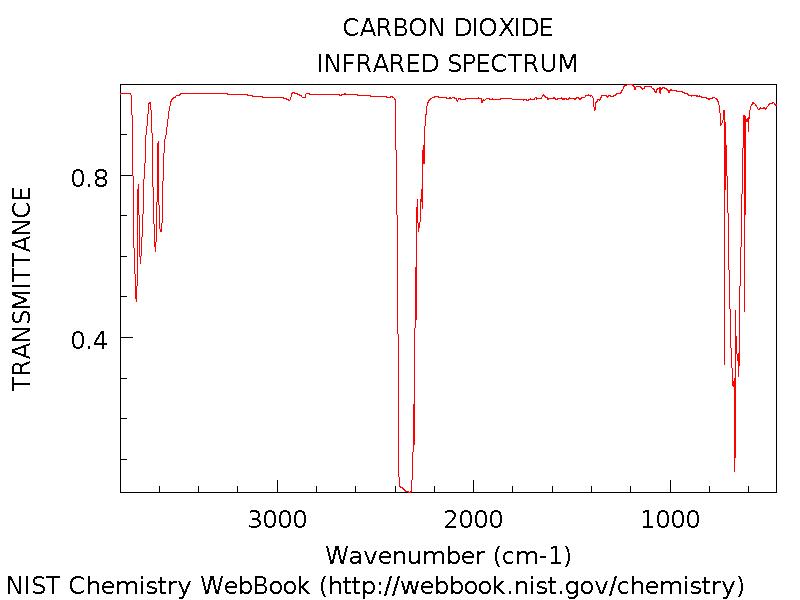 Scientific honesty is at the very heart of the global warming debate, and it will likely be the centerpiece for the legal questions to be presented in the dramatic setting of a federal courtroom. The weakness of the endangerment finding stops not with these two graphs, but with the entire methodology used in producing all of the IPCC reports, including AR4, on which the finding was based.
In Senate testimony to the Committee on Environment and Public Works, Dr. Crichton stated that the verification techniques used in climate research did not meet the basic standard of independent verification. In explaining the scientific method to the committee, Dr. Crichton stated the following:

In essence, science is nothing more than a method of inquiry. The method says an assertion is valid -- and merits universal acceptance -- only if it can be independently verified. The impersonal rigor of the method means it is utterly apolitical. A truth in science is verifiable whether you are black or white, male or female, old or young. It's verifiable whether you like the results of a study, or you don't.

He went on to say:

For a person with a medical background, accustomed to this degree of rigor in research, the protocols of climate science appear considerably more relaxed. In climate science, it's permissible for raw data to be "touched," or modified, by many hands. Gaps in temperature and proxy records are filled in. Suspect values are deleted because a scientist deems them erroneous. A researcher may elect to use parts of existing records, ignoring other parts. But the fact that the data has been modified in so many ways inevitably raises the question of whether the results of a given study are wholly or partially caused by the modifications themselves.

Now that the horse is out, the IPCC is trying to close the barn door by establishing some sort of scientific standard in the wake of significant errors found in the AR4. Better late than never, or maybe not -- at least as far as the court case against the EPA is concerned.
In February of this year, the IPCC stated the following:

But even this standard of accepting "grey literature" does not meet basic standards of publication in scientific journals or government technical memorandums. For example, the National Marine Fisheries Service states the following concerning literature cited in professional papers: "Literature cited comprises published works and those accepted for publication in peer-reviewed literature (in press)."
The EPA will have to explain why it was willing to accept substandard work to establish the endangerment finding. Their lawyers will have to explain why they accepted work that states within the pages of the AR4 an admission of guilt to the sin of data-manipulation. In table 6.1, it states the following: "All reconstructions, therefore, involve a degree of compromise with regard to the specific choice of 'target' or dependent variable."
In English, this means that the data were manipulated to achieve a predetermined "target." This hardly sounds like science...more like fiction. They say that the difference between reality and fiction is that fiction has to make sense. Maybe that explains the content of the leaked e-mail from Tim Osborn to the now-discredited Dr. Phil Jones of the Climate Research Unit at East Anglia University in Great Britain. This e-mail sent on December 13, 2005 discusses ways to manipulate Antarctic data to achieve an outcome that "makes sense" with respect to tropical data.

Even if you do something to sort out the problem at the S. Pole, how about the isolated boxes around the coast of Antarctica, which will be given much less weight than an isolated box in the tropics which might also have only 1 station in.

The e-mail goes on to say that Antarctic data should be given only 79% of its true value: "Perhaps put it in every fourth box, giving a weighting of 0.79 (bit less than tropical, which is reasonable for spatial correlation reasons)?"
By giving greater weight to the tropical data, you can achieve your "target" of global warming...even if it's only fiction.
|