The Wisdom of Conservatism

By Andrew Foy, MD
When I was in college, I didn't consider myself particularly liberal or conservative. Instead, I considered myself pragmatic, and as such, above any narrow-minded partisan thinking. At that time in my life, I started to recognize that there were real problems in society, and I believed that the role of government was to solve them. I also believed that if enough smart people -- by that I mean properly credentialed with the appropriate letters behind their names -- worked together, then they could ultimately find a solution to any problem in society.
My grandfather, on the other hand, rejected the notion that the government is capable of solving society's problems. More often than not, he would laugh at the solutions being offered by the political class. He said he'd seen it all before. According to him, the government was the problem, not the solution. At the time, I resented his attitude. I thought he was just a grumpy old man who didn't have the appropriate credentials or letters behind his name to validate his crass opinions. However, over time, I came to realize that he was right, and through the process of that realization, I came to understand and appreciate the wisdom of conservatism.
Needless to say, as a young college student, I had not given much thought to the principles of conservatism or the foundational principles of American government. But because I enjoyed political philosophy and U.S. history, I would soon begin to read all about them.
Most historians attribute the first observation of conservatism to the Irishman Edmund Burke. For Burke, conservatism was synonymous with individualism. Individualism appreciates the limitations of individual knowledge and recognizes the fact that no person, small group, or government can know all that is known among the mass of individuals in society. Therefore, the "Burkean" definition of conservatism favors limited government and opposes the use of coercion to solve problems or bring about association. Instead, it posits that problems are better solved by the voluntary and spontaneous collaboration of individuals that occurs outside of government.
Conservatism recognizes the inherent folly in the belief that government is capable of solving society's problems because government is nothing more than a group of individuals, and as such, cannot possibly take into account all the permeations, variability, and fluctuating desires of the mass of individuals who compose society. For this reason, conservatism does not believe that the government's role is to solve problems, but rather to create conditions in which individuals can solve their own problems. Therefore, the role of government from the conservative perspective is simple: to protect individual freedom and to secure peace. These were the foundational principles of American government set forth in the Constitution, making the United States the first truly conservative nation.
Unfortunately, the U.S. government has moved away from its constitutional foundation and repeatedly entered into the problem-solving realm. Today we find ourselves in a position where the government's solutions, which have been implemented over the course of many years to solve problems in society, have left us with much bigger problems than the ones originally intended to be solved.
Consider that our nation's unfunded liabilities, which most notably include Social Security, Medicare, and Medicaid, are growing much faster than the rate of economic growth. 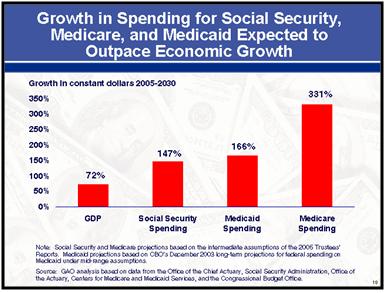 These programs were intended to alleviate a degree of suffering that would occur for program beneficiaries in the absence of such a safety net. However, these programs now threaten to bankrupt the country and pose a severe burden to taxpayers. More importantly, they have encouraged many citizens to expect paternalistic support from the government, and this attitude has become so pervasive that any talk of cutting benefits is met with a degree of incredulity that all but stifles any hope for achieving meaningful progress in the area of debt reduction. If these programs aren't reformed in a meaningful way, then the country will soon be insolvent.
The problem of health care costs and inflation that we face today is a direct result of previous government policies aimed at addressing the problem of health care costs. Unfortunately, the problem is much worse now than when the government intervened in the 1960s and '70s.
In a policy review prepared for the Commonwealth Foundation, Laffer, Arduin, and Winegarden describe how the government's involvement in the health insurance market has resulted in

a large and growing health care wedge -- an economic separation of effort from reward, of consumers (patients) from producers (health care providers), caused by government policies ...The wedge is a primary driver in rising health care costs, i.e., inflation in medical costs.

The government's involvement in health care has become so complex that a 2,000-plus-page bill that included an untold number of backroom deals with unions, special interests, and industry lobbyists was required to achieve comprehensive reform that would have ultimately resulted in higher premium rates for average Americans.
The recent housing crisis and recession are a lesson in unintended consequences. In the government's attempt to solve the housing problem, it juiced the housing market, and, in conjunction with the Federal Reserve's lending policy, created an enormous housing bubble. In 1993, President Clinton significantly broadened the Community Reinvestment Act, originally signed in 1977, that mandated all F.D.I.C insured banks to give more loans to lower-income households (or less creditworthy borrowers). This move received broad political support. As a result of these changes, homeownership and inflation soared. 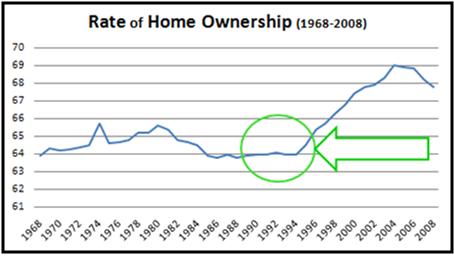 Furthermore, the government-sponsored enterprises Fannie Mae and Freddie Mac enthusiastically purchased high-risk mortgages from lenders on the secondary mortgage market. Encouraged by the knowledge that high-risk mortgages would be swallowed up by Fannie and Freddie, lenders had incentive to extend as many mortgages as possible, regardless of the creditworthiness of borrowers.
Finally, in 2006, the Fed raised interest rates from 1% to 5.25% to avoid high inflation. Suddenly mortgage payments shot up, the demand for housing dried up, foreclosures multiplied, the credit crunch ensued, and heavily leveraged firms collapsed. The resulting financial crisis, caused by government intervention, has led only to more frenzied and hysterical government intervention that shows no signs of letting up.
In the meantime, Thomas Jefferson must be either laughing or crying. After all, he favored "a government rigorously frugal and simple." He favored the kind of government that was established by the U.S. Constitution, the kind of government that was intended to protect individual freedom and to secure peace. However, over the last hundred years, the government has morphed into a limitless monster swallowing up individual freedom, encouraging irresponsibility, restricting economic growth and creating terrible problems in its wake.
In response to these problems, the true conservative position is to encourage a return to constitutionalism. Conservatism discourages further government intervention to stimulate the economy, fix health care, prevent the oceans from rising, etc., and instead advocates for legislation that decreases government involvement and respects the foundational American principles of individual freedom, personal responsibility, and limited government. For as I have come to appreciate since my college days, and as my grandfather has long known, conservatism wisely recognizes that much for which the coercive action of the state is invoked can be done better by the spontaneous and voluntary collaboration of individuals.
Hat tip: Brenton Stransky
Andrew Foy, M.D. is co-author of the upcoming book The Young Conservative's Field Guide and can be contacted through the website ahardright.com.
|