The Obama regime had all the power: the White House and a majority in the House and the Senate. Team Obama owns the liberal media. Because the media selected him, they have a vested interest in protecting his presidency. Obama also had the American people in his corner; youths considered him a rock star, blacks saw him as their Great Black Hope, and naïve whites thought that casting their vote for a black guy would finally put an end to them being called racist.

Our master of deception president accuses Republicans of standing in the way of his government-run health care plan. In reality, the Republicans do not have enough votes to stop any item on Obama's unprecedented, far-left, radical agenda. Obama believed that he could silence all dissent from "we the people" by playing the race card. Yes, Obama the all-powerful seemed unstoppable. Who could have ever predicted that the weight of Obama's own arrogance would trigger his demise? Ego is Obama's Achilles' heel.
Almost from day one, Obama began unconstitutionally usurping power by nationalizing banks and the auto industry. While deceitfully preaching unity, Obama was like the guy in cowboy movies who stands on the steps of the jailhouse. He masterfully works the crowd into a frenzy and demands that they drag out the accused prisoner and hang him. This is what Obama figuratively did to corporate executives, CEOs and anyone who opposed his agenda. It is not unfair to suggest that the SEIU (Service Employees International Union) thugs who beat up a black conservative at a town hall meeting -- in other words, Obama's posse -- were inspired by Obama's orders for his supporters to attack his opposition by "hitting back harder."
In President Obama, I see a bully. During his State of the Union address, Obama used 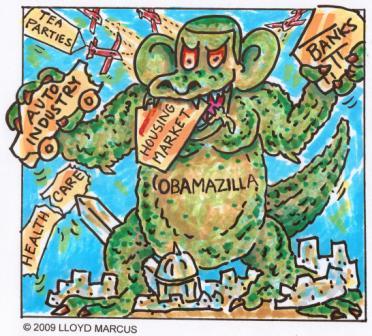 his (pardon the pun) "bully pulpit" to bully the free market, banks, insurance companies, Republicans, and even the Supreme Court. Obama governs the Chicago way: no compromise -- simply destroy your opponent. Mr. Clout Goes to Washington would be the perfect title of a movie about his reign.
Leadership emanates from the top down. Mary Kay of MK Cosmetics said, "The speed of the leader is the speed of the gang." Obama's number one and two enforcers, Harry Reid and Nancy Pelosi, equal (if not surpass) his unbelievable arrogance. At town hall meetings across America, "we the people" passionately said "no" to government-run health care. As an exclamation point to our national "no," hundreds of thousands of protesters showed up in Washington, D.C. Unbelievably, the Reid/Pelosi tag-team are still conniving and scheming to force Obamacare down our throats. Remarkably arrogant.
While the Obama regime appeared powerful, unstoppable, and spreading "like a green bay tree," a change was happening across America. Americans were awakening from their Night of the Living Dead Obama zombie trance. His speeches are no longer heard by many as the voice of a messiah.
Republican Scott Brown's shocking win in Massachusetts confirmed that Obama's spell has been broken. Even after Obama's emergency visit, the Senate seat owned by Democrats for almost half a century was lost -- a devastating affirmation of Obama's declining power.
But who is responsible for the fall of the "chosen one"? Not the Republicans. While the Tea Party movement has played an extremely vital role, Obama's biggest problem has been his arrogance and his ego. Contemptuously, Obama believes he can use America's ignorance of history and the facts, his superior intellect, and his amazing oratorical skills to ignore the Constitution and the will of the American people. Obama arrogantly remains relentless in his quest to implement his rejected overreaching agenda.
I have received gloom-and-doom e-mails saying, "Lloyd, you tea party folks are just wasting your time. Our government is corrupt and nothing will change it." My response: "So, your solution is we sit on our hands and do nothing. Thanks for sharing."
Despite our big bad president's continued huffing and puffing and threats to blow America's house down, his power is rapidly declining. This is why when confronting evil, one should never give up. Keep moving forward, fighting the good fight, and doing what makes sense and feels right to do. You never know what tomorrow may bring. In politics, as in life, things can change on a dime.
A month ago, freedom and liberty were on life support. Obama's government-run health care, cap-and-trade, and the rest of his socialistic agenda appeared to be unstoppable "done deals."
Today, Obama's promise to "fundamentally transform America" appears to be down for the count. This makes me feel like singing, "The sun will come out tomorrow, bet your bottom dollar that tomorrow there'll be sun..."
The Bible says, "I have seen the wicked in great power, and spreading himself like a green bay tree" (Psalms 37:35). A classic scenario is evil appearing to be all-powerful only to be defeated. Wow, what an accurate description of the collapsing Obama administration.
-Lloyd Marcus, (black) Unhyphenated American, singer/songwriter, entertainer, author, artist, and Tea Party patriot
LloydMarcus.com
|