By Marc Sheppard
By now, Phil Jones of the University of East Anglia’s Climatic Research Unit (CRU) should require no introduction, so let’s get right to it.  In a BBC Q&A and corresponding interview released Friday, the discredited Climategate conspirator revealed a number of surprising insights into his true climate beliefs, the most shocking of which was that 20th-century global warming may not have been unprecedented.  As the entire anthropogenic global warming (AGW) theory is predicated on correlation with rising CO2 levels, this first-such confession from an IPCC senior scientist is nothing short of earth-shattering.
Of course, much will be made of Jones’s claim that the refusal to share raw temperature data was partially based on the fact that it “was not well enough organized.” And rightly so, as the very idea that the major datasets CRU released for use in vital anomaly and temperature reconstructions were based on data not “organized” enough to be made public reeks of fraudulent behavior.
Then there are the statements Jones made regarding relatively recent temperature trends which truly boggle the mind.
Imagine a man who has spent the better part of the past 25 years toiling to convince the world of CO2-forced 20th-century warming now admitting that the difference in warming rates for the periods 1860-1880, 1910-40 and 1975-2009 is statistically insignificant. Jones even acceded that there has been no statistically-significant global warming since 1995; that in fact, global temperatures have been trending to the downside since January of 2002, although he denied the statistical significance of the -0.12C per decade decline.
Yet as incredible as those concessions truly are, they pale in comparison to this response to a question about the significance of the Medieval Warm Period:

There is much debate over whether the Medieval Warm Period was global in extent or not. The MWP is most clearly expressed in parts of North America, the North Atlantic and Europe and parts of Asia. For it to be global in extent the MWP would need to be seen clearly in more records from the tropical regions and the Southern Hemisphere. There are very few palaeoclimatic records for these latter two regions.

Stop the tape.
Much debate?  So Jones now openly admits that the debate as to whether the MWP (900-1300 AD) was worldwide and warmer than any period since is not over.  He even went on to explain the implication of his admission:

Precisely, and yet, as director of CRU since 1998, rather than remedy the paucity of well-dated, high-resolution SH paleo-temperature records in order to establish the incredibly vital truth, Jones instead worked closely with those conspiring to remove the MWP from the climate history records altogether.
Why the subterfuge?  Perhaps a brief recap is in order.

As previously discussed here, prior to 2001, the similarly embattled U.N. Intergovernmental Panel on Climate Change's position on the prior millennium was that global temperatures had fluctuated drastically with not one but three radical shifts occurring over the period. The MWP – which was several degrees warmer than today -- was followed in circa 1300 by the abrupt cooling of The Little Ice Age (LIA), which lasted until approximately 1850. And then began the modern warming period, which was by no means unique and apparently ended with the millennium itself.
As I wrote in December’s Understanding Climategate's Hidden Decline:

But this image of a fluid climate system subject to abrupt and natural up-and-downturns made unprecedented 20th-century warming about as marketable as Florida swampland.  And opportunists who depended on the aberrance of post-industrial revolution warming in order to condemn and control mankind’s CO2 emissions soon recognized that perhaps the LIA but most certainly the MWP simply had to go.

And in the 2001 IPCC Third Assessment Report (TAR), that’s exactly what happened.  Both the Working Group 1 (WG1) report and the highly-politicized Summary for Policymakers (SPM), which invariably commands the bulk of media and political attention, prominently featured the now infamous “Hockey Stick” graph. 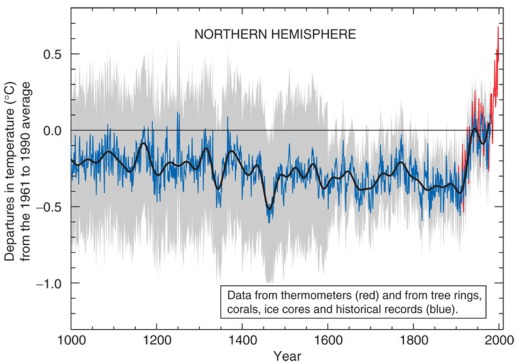 As you undoubtedly know, the graph, aka MBH98, has become the poster-child of the AGW propaganda machine.  Serving as the centerpiece for Al Gore’s sermon on the mounting dangers of human achievement in his 2006 sci-fi film, it has come to represent the mainstream accepted depiction of last millennium’s temperatures.  That is, trending downward prior to an abrupt upturn around 1900, coinciding with the atmospheric build-up of CO2 emissions brought about by the industrial revolution.  In AR4’s SPM, policymakers absorbing the striking visual were also treated to this declarative caption:

“[T]he rate and duration of warming of the 20th century has been much greater than in any of the previous nine centuries.  Similarly, it is likely that the 1990s have been the warmest decade and 1998 the warmest year of the millennium.”

Despite repeated debunking, the embattled chart continues to languish in U.N. climate reports, its portrayal of unprecedented 20th-century warming a major sales tool to those wishing to influence everything from domestic energy policy to international “climate-debt” reparations. All based on the ostensibly “settled science” that the waste-products of mankind’s economic expansion are dangerously increasing temperatures and ultimately threatening the planet.
And yet, now Jones – who was a contributing author of the same TAR WG1 report which featured the fraudulent chart -- admits that the science behind it isn’t settled at all.  In fact, he even admitted that the MWP was “clearly expressed” in the Northern Hemisphere, which it certainly was.
Indeed, we know that, during the MWP, ice-free seas allowed the Vikings to settle a then comfortably warm Greenland, where colonies flourished for many centuries.  Modern archaeologists digging through the island nation’s permafrost have uncovered bones and artifacts attesting to the villages established there early last millennium, as well as the grains that were grown and the livestock that were raised on the farms settlers tended.  We also know that it was the sudden drop in temperatures beginning around the mid-fourteenth century and the ensuing deep-freeze of the LIA that would mark Greenland’s climate reversal and paradise’s end for the intrepid Norse settlers.
But take another look at Figure 1b above, supposedly based on Northern Hemisphere temperatures.  Am I alone in noticing no “clear expression” of warming between 1000 and 1300AD?
How about here?  This was a chart of Jones’s own creation.  In fact, this is the same 2000 World Meteorological Organization report [PDF] cover chart Jones admitted to using a “trick” on in the now-famous “Hide the Decline” email.   It, too, represents the Northern Hemisphere.  Any sign of the MWP?   Hardly surprising considering that propping up their failing proxy reconstructions which eliminate the MWP was the primary reason Jones needed to “hide the decline” in the first place. 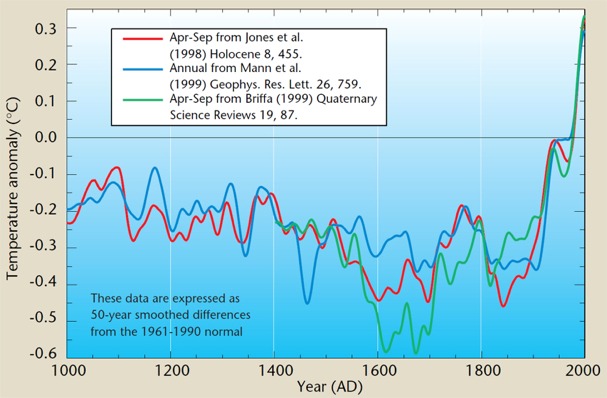 Those still unfamiliar with the details of “Mike’s Nature Trick” can read my full analysis here.  In a nutshell, the Climategate conspirators found it necessary to terminate certain proxy-generated (from tree ring density measurements) series at the 1960 mark and splice on “actual” temperature readings (which we now know were themselves manipulated) to hide the fact that their proxies showed a decline in temperatures at that point.
It’s interesting that Jones told the BBC on Friday that he was “justified in curtailing the tree-ring reconstruction in the mid-20th Century because these particular data were not valid after that time.”  For however he spins it, the divergence between proxy and instrumental temperature readings after 1960 revealed serious design flaws in the proxy reconstructions.
In December, I observed that such flaws challenge the entire regression analysis dating back to 1000 AD.  Given Jones’s admitted acceptance of at least a NH MWP, is there any doubt that neither of these two Hockey-Stick shaped NH graphs represents the reality of the previous millennium?  Or that Jones and company were fully aware of the fraud baked into them, as were the assorted U.S. and U.N. agencies that widely published and referenced them?
Both Kyoto II and the domestic cap-and-tax scams appear to be dead for the moment.  But, while any such move would likely be tied up in the courts for years, EPA head Lisa Jackson’s threats to proceed with carbon regulation remain very much alive.
All of these schemes to control energy consumption while redistributing wealth rely on the same “scientific experts” to justify their price-tags -- likely measured in trillions.  And since the Climategate scandal broke in November, we’ve confirmed that very many of them – at NASA, NOAA, and even the IPCC itself -- have breached the standards of both science and ethics in order to advance their global warming political agenda.
But be that as it may -- the level of deception perpetrated by Jones and his co-conspirators at the Climatic Research Unit will likely remain the yardstick by which climate fraud is measured for years to come….

…And always remembered as the beginning of the end of the international AGW hoax.
|