Warning: mysqli_free_result() expects parameter 1 to be mysqli_result, bool given in /var/www/html/americanthinker/admin/common/functions/func.general.php on line 126
 Climategate: What's Wrong with this Picture? - American Thinker
|

Climategate: What's Wrong with this Picture?

By Dexter Wright
Scientific Nobel Prizes are traditionally awarded to scientists whose work has been found to be a foundational discovery in the fields of physics, chemistry, or medicine. However the rules are different for a Nobel Peace Prize. The Peace Prize is more of a popularity contest; otherwise, how could we explain that the PLO thug Yasser Arafat was a recipient? In 2007, the Nobel Committee awarded the Intergovernmental Panel on Climate Change (IPCC) a Nobel Peace Prize to be shared with former Vice President Al Gore. It is important to note that the Peace Prize was not awarded for any discipline in science. As time has passed, the work that went into the award-winning report has come under scrutiny as questions of sloppy scientific methods are raised in the wake of Climategate. Looking closely at the report reveals scientific flaws.
Buried deep in the pages of the report are several graphs claiming to show that the average temperature of the Earth has been warming since the beginning of the industrial revolution. One of the more infamous graphs is the Northern Hemisphere Temperature Reconstruction Graph (below). This graph leaves off the Antarctic continent, where routinely, temperatures are recorded at well below -40o Celsius. The coldest temperature on Earth ever recorded was -89o C was at Vostok Station on the Antarctic plateau in 1983. This Northern-Hemisphere-only temperature graph was plotted with an accuracy of one-tenth of a degree Celsius and is touted as strong "evidence" for what has been termed anthropogenic global warming (AGW). The devil is in the details, as they say.

So just what are details concerning the accuracy of these temperature graphs? The data that went into compiling the graph above were of two types. The earliest plots are derived from proxy data, and the more recent plots are from instrument-derived data. Proxy data is indirect data taken from tree rings, coral, or sediments. Instrument data is theoretically the most accurate because it is actually recorded off a thermometer or other calibrated sensors. Reconciling the different sets of data is supremely difficult. The techniques used to reconcile the data create known values of error termed margins of error. Yet there are no error bars plotted on this Northern-Hemisphere-only graph. Is this just an oversight?
Looking closely at the graph reveals a significant problem: None of the proxy data derived temperature traces agree with each other. Specifically, just after A.D. 1600, the temperature trace in lavender shows temperatures cooling, while the blue line shows that temperatures are warming. In each case, the trends are less than two-tenths of a degree Celsius in variance.
If we peel back one layer of the onion, we can look into the accuracy of proxy data. The accuracy issue was the focus of a scientific paper published by NASA's Dr. Gavin A. Schmidt in May of 1999. In the abstract of the paper, he asserts that "[p]aleoclimatic inferences from these carbonate isotope records are strongly affected by erroneous assumptions concerning the covariations of temperature and salinity and 18O."
In English, that means that there are significant problems with the proxy data.
Dr. Schmidt goes on to say, "There is an average of 0.8o C difference between the isotopic temperatures calculated from NP and WA after calibration and both have maximum errors from summer sea surface temperature (SST) of over 7o C (at year 10)."
Maximum errors of over 7o C! That is almost 14 degrees Fahrenheit. How then is the Nobel Prize-winning report able to plot a temperature graph to a tenth of a degree? Is this just sloppy work, or could it be deliberate?
As they say on TV infomercials, "But wait...there's more!" Peeling back another layer of the onion reveals more problems. Even the instrument-derived temperature data is fraught with problems. The temperature data plotted on the graph is supposed to be a global average. But instrument-derived temperature data has not been reliably available on all seven continents for most of the twentieth century. Last time I looked at the globe in my office, it had seven continents on it. 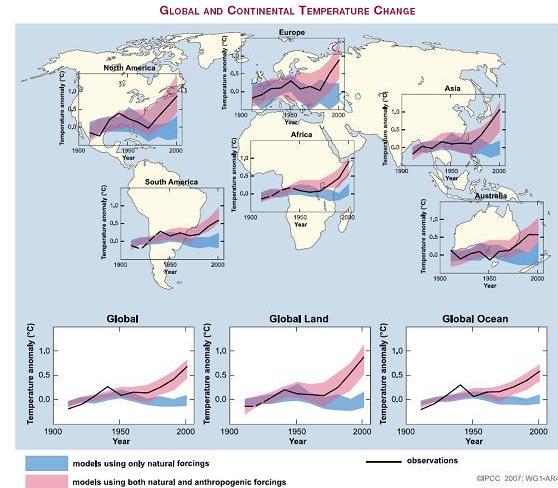 But in another graphic in the 2007 IPCC report, Antarctica is missing. What happened to Antarctica? How clever to leave out the coldest place on Earth when trying to make the case for AGW. Temperature data from two other continents is problematic; the first regular temperature reports from the interiors of Africa and South America do not begin until 1949, which is why those lines are dashed prior to 1949. The first regular temperature records from Antarctica do not even exist until 1957, when the international community agreed on the International Geophysical Year (IGY). The data from the other five continents is problematic as well prior to the IGY.
One of the very first accomplishments of the U.N.'s World Meteorological Organization was to standardize the way meteorological data, and specifically temperature data, was collected. This standardization did not go into effect until the IGY. Prior to the IGY, some countries read temperature data from thermometers exposed to direct sunlight. This technique skewed the data substantially to the warm side. The standard now is that temperature data is to be read from a calibrated thermometer (or temperature sensor) inside a well-ventilated housing unit to get what is termed the "ambient air temperature." So essentially there is no reliable global instrument based-temperature data available prior to 1957.
Is it possible that all of these well-documented problems with global temperature data were overlooked by the scientists from East Anglia University in Britain? The answer may lie in one of the recently uncovered e-mails. One such e-mail was in response to a discussion about the 2009 temperature data set and was sent on the 27th of October, 2009 from Dr. Michael Mann to the now-discredited Dr. Phil Jones. Dr. Mann states the following: "As we all know, this isn't about truth at all, its about plausibly deniable accusations."
And for this the Nobel Prize was awarded!
|