A Tax Holiday for Corporations?

By Jon N. Hall
America has the second-highest corporate tax rate on Earth. Economists say that this puts America at a competitive disadvantage. So to spur growth and help get us out of the Great Recession, some have urged Congress to lower the corporate tax rate. But rather than cutting rates, why not suspend the Corporation Income Tax altogether?
In the Age of Trillion-Dollar Deficits, what would that do to federal revenue?
The highest federal revenue from the corporate income tax for any fiscal year was $370B in 2007. By contrast, fiscal year 2009 saw total corporate income tax revenue fall to $138B, a drop of 62.7 percent. (All years cited herein are fiscal years. Data herein can be found in the OMB's latest Historical Tables, pages 31-33. Chart below.)
But 2007 was a rather good year, when total federal revenue hit the all-time record of $2.568 trillion; while 2009, an indisputably dismal year, saw total federal revenue slide to $2.104 trillion, an 18-percent decline. So the percentage decline in corporate income tax revenue was 3.48 times greater than the percentage decline in total revenue.
Looking at pages 32 and 33 (Table 2.2), we see the portion of total federal revenue taken up by the corporate income tax to be higher in years 2005 through 2007 than in any year since 1980. And from 1980 going back to 1934 (where the table starts), we see that the corporate income tax's portion of total revenue was always in the double digits and was above 20 percent from 1941 through 1967, even hitting 39.8 percent in 1943. In 1983, when America was rising out of a recession, corporate taxes accounted for 6.2 percent of total revenue, the lowest percentage on the chart. But the next-lowest (6.5 percent) was that of 2009, that indisputably dismal year. 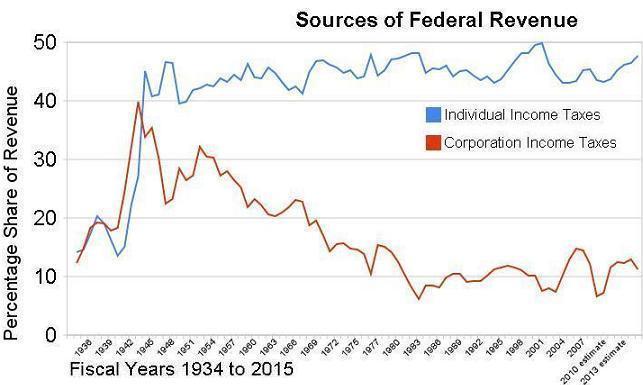 From 1941 through 1961, the share of total revenue contributed by corporate taxes ranged between 20.3 and 39.8 percent and averaged 28.1 percent. But from 1980 to the present, it ranged between 6.2 and 14.7 percent, averaging 8.92 percent from 1981 through 1990 and 10.61 percent from 1991 through 2000.
So the trend for the last seventy years has been for corporate income taxes to take up less and less of total federal revenue. This is certainly true of the boom years in the 1980s and the '90s, which averaged a 9.76-percent share. In 2008, a fiscal year mostly in recession, the corporate tax's share of total revenue (12.1 percent) was higher than in any of the boom years under Reagan, Bush the elder, and Clinton.
Let's compare the corporate income tax with another source of federal revenue:
The Individual Income Tax has been the largest source of federal revenue since 1944, when it shot up to 45 percent of total revenue. This tax's share of total federal revenue has stayed in the forty- to fifty-percent range ever since (except for 1949 and 1950), and it reached its all-time high of 49.9 percent in 2001. In 2000, the first year total federal revenue topped $2 trillion, individual income taxes made up 49.6 percent of total revenue, while corporate income taxes made up only 10.2 percent.
If Congress were to suspend the corporate income tax to spur the economy, what would corporations do with their "windfall"? Would they just give themselves raises and bonuses? To prevent such a thing, Congress might put provisos on what companies could do with their profits, like insisting that they take on new hires. But how can a business add workers when the consumer isn't spending?
In the Age of Trillion-Dollar Deficits, the federal government can't afford to forgo any revenue. But some have proposed a "payroll tax holiday," which could deprive the feds of far more revenue than a corporation tax holiday. Revenue from the payroll tax has provided 30-40 percent of total fed revenue for decades.
So suspension of the corporate income tax seems to be a nonstarter. Besides, if a corporation doesn't have any profits, which is often the case in a recession, it won't be paying any taxes anyway. Suspension of certain targeted taxes for low-income earners might be feasible if Congress were to suspend its infernal spending.
If suspension of taxes isn't a good idea, then neither is a temporary cut in tax rates. The problem with a temporary tax rate cut is that when a recession is over and the rate is reset back to "normal," it puts a drag on the recovery. Tax rates should be set to rates that work during both recessions and booms. Temporary measures are an override of the free market. What Congress should do is set the corporate tax at competitive rates permanently. Scott A. Hodge of the Tax Foundation reports:

[O]ver the past two years, more than 50 nations -- including China, Great Britain and Germany -- have cut their corporate income taxes in order to maintain their global competitiveness. Many of these countries have pleasantly discovered that lower tax rates reduce the incentive for businesses and individuals to engage in income-shifting which means more taxable income stays in-country.

If America wants to be truly competitive, then her corporate tax rates should be no more than the average rates of other major industrial economies. If we want to be competitive with France, Germany, Canada, and the U.K., then this would mean a reduction in rates of 11.1 percentage points. Using static analysis, this would mean a loss of $15.3B for 2009, a mere rounding error for our profligate Congress.
Let's permanently lower corporate income tax rates and make America a more attractive place to do business.
Jon N. Hall is a programmer/analyst from Kansas City.
|