Warning: mysqli_free_result() expects parameter 1 to be mysqli_result, bool given in /var/www/html/americanthinker/admin/common/functions/func.general.php on line 126
 What the Dems Know: Universal Voter Registration - American Thinker
|

Many are puzzled that Democrats persist in ramming unpopular and destructive legislation down our collective throats with no apparent concern for their plummeting poll numbers. A widespread belief is that the Democrats are committing political suicide and will be swept from one or both houses of Congress with unprecedented electoral losses next November. But since Democrat politicians rarely do things that will not ultimately benefit themselves, this column asked two weeks ago, "What do they know that we don't?"

We may have found out. It's called universal voter registration. The Wall Street Journal's John Fund described the Democrat plan recently at a David Horowitz Freedom Center forum. Watch the video here.
Fund describes the proposal as follows:

Fund anticipates that Congress will attempt to ram this legislation through, as with the health care bill. What a surprise! Fund covers the vote issue at greater length in his book, How the Obama Administration Threatens to Undermine Our Elections.
Leftist groups are already arguing that universal voter registration will solve all the problems with our voting system. But the left created most of these problems. The radical leftist Nation Magazine, for example, absolutely loves the idea of universal voter registration. This is the same magazine, however, that advanced Richard Cloward and Frances Fox Piven's Manufactured Crisis strategy. The Cloward/Piven strategy was designed to undermine government institutions by overwhelming them with impossible demands for services. Cloward and Piven focused on welfare, housing, and voting as the main targets of this strategy, and the radical group ACORN was specifically created for the purpose of executing it.
The Nation article enthusiastically lists Cloward/Piven-inspired organizations like Project Vote, the ACORN group where President Obama cut his teeth. It also discusses the left's efforts to push enforcement of the Motor Voter law and explains how universal voter registration could assist in these efforts. Cloward and Piven were the ones who crafted Motor Voter legislation in the early 1980s and pushed for its enactment until 1993, when President Clinton signed it into law. 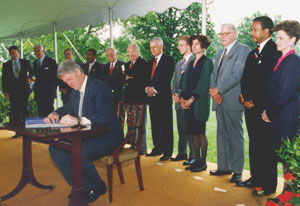 g directly behind Clinton at the Motor Voter signing ceremony.
The left has predictably launched vicious smear attacks against John Fund for bringing universal voter registration to our attention. A Google search of the issue brings up any number of nasty ad hominem attacks. Most notable is Media Matters, the leftist group whose sole purpose seems to be to smear Republicans and defend the left's indefensible policies. They put up this gem: "Right-Wing Ass Weasel John Fund Doesn't Like Universal Voter Registration because of ACORN."
The problems with universal voter registration are numerous and obvious. Many states' lists include vast numbers of illegals, including some states which allow illegals to obtain drivers licenses; because many homeowners have more than one home, there will be duplicates; because so many people are on so many separate federal and state government agency lists, there will be duplicates; and because so many lists exist with little or no cross-checking capability, all of these duplicates are likely to go uncorrected. Add to this the fact that Dems hope to extend voting rights to felons, and the whole thing begins to look like a nationwide Democrat voter registration drive facilitated by taxpayers.
Universal voter registration will create massive vulnerabilities to systemic voter fraud nationwide, and if Democrats have proven anything in recent years, it is that they can win elections that way. The George-Soros-funded Secretary of State project (SOS) was designed to take advantage of such vulnerabilities and may have been developed in anticipation of the universal voter registration plan. Al Franken's stolen election in Minnesota was a trial run for the SOS project. Longtime ACORN friend Mark Ritchie was elected Minnesota Secretary of State in 2006 with Soros's SOS and ACORN money, and what followed in Norm Coleman's Senate runoff election was a frightening demonstration of just how far Democrats will go to win. Franken won the runoff, and the Democrats got their filibuster-proof sixty-vote Senate majority.
The Motor Voter law was correctly identified as a facilitator of vote fraud. One of the few legal issues Barack Obama actually participated in as a lawyer was a 1995 suit against the State of Illinois, which he brought on behalf of ACORN. Then-Republican Governor Jim Edgars saw the newly passed Motor Voter act as creating the potential for massive vote fraud and refused to implement it. With the assistance of the Clinton Justice Department, Obama's legal team won that suit. Obama himself actually participated very little, a strategy that seems to have served him well in life. According to the Chicago Sun-Times, after identifying himself in court proceedings, Obama sat back and let "the heavy-hitters at the Justice Department make the arguments."
It is not surprising that the Democrats are now choosing to push this new initiative, for universal voter registration will be Motor Voter on turbochargers. And who better to sign it into law than the president from ACORN?
James Simpson authored the landmark article Barack Obama and the Strategy of Manufactured Crisis.
|