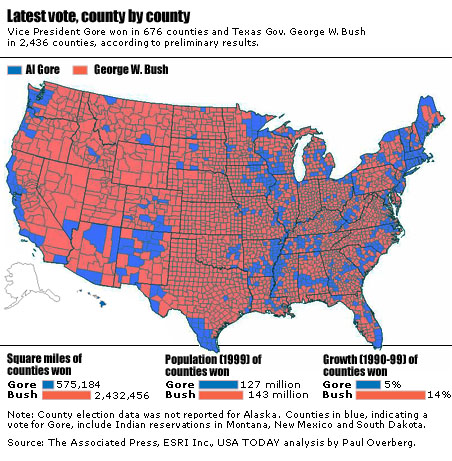 Source: USA Today.
The above maps appear to be roughly the inverse of each other. That is, locations that voted for Al Gore tended to suffer higher cancer rates.
To analyze this phenomenon more rigorously, the Hoven study looked at the cancer mortality rate and the percentage of 2000 presidential votes going to Al Gore for each of the fifty states. The result is shown in the figure below, which also includes the linear regression trend line. The slope of that line is 1.24 cancer deaths per 100,000 person-years for every percentage of vote going to Al Gore.

The correlation coefficient between cancer mortality and votes for Al Gore is 0.594. That is statistically significant from zero when taken over the fifty states. In fact, the 95% confidence interval on the slope of the trend line is 1.241 + 0.014, indicating that voting Democrat is associated with at least 1.22 cancer deaths per 100,000 person-years.
Also, the 0.594 correlation coefficient indicates that about 35% of cancer mortality is "explained" by voting Democrat. (The amount of explanation is the square of the correlation coefficient.) Thus, not all cancers are caused by voting Democrat.
The Hoven study concluded that "[v]oting Democrat is associated with cancer mortality."  This is similar to the conclusion of the study "Health Insurance and Mortality in US Adults," cited by Democrats in support of their version of health care reform. That latter study concluded that "[u]ninsurance is associated with mortality."
However, one of the co-authors of that latter study, Dr. David Himmelstein, went farther in an interview with CNN. He said that if a person is uninsured, "it means that you're at mortal risk." As CNN summed it up, "45,000 deaths per year in the United States are associated with the lack of health insurance." The implication from both Dr. Himmelstein and CNN is that not only is there correlation between insurance and mortality, but also causation: Not having insurance causes you to die.
From the Hoven study, the mortality rate could be reduced by 1.24 deaths per 100,000 person-years for every percentage of the vote not going Democrat. Barack Obama won with 53% of the vote, which means the cancer mortality rate could be reduced by almost 66 -- or from the current U.S. average of 209 to about 143 deaths per 100,000 person-years -- if everyone refused to vote Democrat. That is a reduction of over 30% in cancer deaths. Given that there are over 500,000 cancer deaths in the U.S. every year, over 150,000 cancer deaths could be averted by not voting Democrat.
By applying the same logic in interpreting both studies, three times as many lives could be saved by no one voting Democrat as by providing universal health insurance.
Harry Reid said, "On average, an American dies from lack of health insurance every ten minutes." If he can say that, then I can say, "On average, an American dies from voting Democrat every 3.5 minutes." Both statements are equally valid.
(Unlike certain climate scientists, Hoven provides data sources and methods used in his study.)
Source of 2000 election results: Federal Election Commission.
Source of cancer mortality rates: National Cancer Institute.
Methods: correlation, hypothesis-testing, and confidence limit calculations found in most elementary probability and statistics textbooks. Hoven used Probability and Statistics for Engineers and Scientists, by Ronald E. Walpole and Raymond H. Myers (Macmillan Publishing Co., 1972).
Randall Hoven can be contacted at randall.hoven@gmail.com or via his website, randallhoven.com.
|