Warning: mysqli_free_result() expects parameter 1 to be mysqli_result, bool given in /var/www/html/americanthinker/admin/common/functions/func.general.php on line 126
 The Tea Party Movement Does Not Need a Leader! - American Thinker
|

The Tea Party Movement Does Not Need a Leader!

A recent article predicted that the tea party movement will fail and fade away because it does not have an official leader promoting a single agenda. I disagree.

After attending a Florida tea party, Rhonda Lochiatto, an elementary school teacher, decided to run for school board. In her own words, "I am tired of the mismanagement of funds that goes on in the school district and of the current policies and procedures that are taking place when it comes to grading, etc."
Rhonda epitomizes what the tea party movement is all about: concerned citizens and true patriots stepping up to the plate and following their passions and gifts to help rescue America from the leftists trying to change her forever. In my travels across America on Tea Party Express tours one and two, I met many patriots young and old who were running for office for the first time. Seeds planted by the tea parties have harvested a cornucopia of new organizations. Their common goal: Take back America.
No, we do not have a single person as our grand pooh-bah. We draw inspiration and information from many conservative voices in and out of politics. 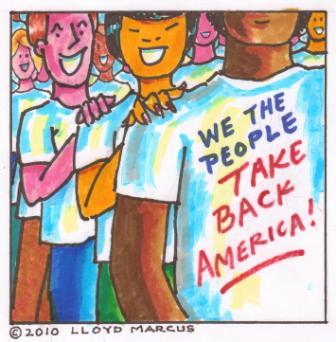 Any attempt to rein in all tea party patriots under one leader and strategy would be a mistake, not to mention impossible. Unquestionably, the power and force of the tea party phenomenon grows daily as more and more Americans awaken from their Obama trance (he sure is pretty, black, and well-spoken). They rub their eyes, see the craziness of his agenda, and shudder -- "Oh my gosh, what have we done?"
The tea party movement is bigger than any one person. Patriots driven by their individual passion and talent are needed on all fronts, local and national. Individual initiative, a part of the American national character, powers this movement.
The only thing I would advise against is the formation of a national third party. It would split the conservative/libertarian vote, thus ensuring a Democrat victory. Remember the phrase "Not your dad's Chevrolet"? Obama, Reid, Pelosi, and company have an agenda far different from our parent's perception of the Democratic Party, which has become a haven for far-left radicals, socialists, secular progressives, and plain old America-haters.
While I admit that the Republicans are guilty of embracing a "liberal lite" agenda to win votes (which did not work -- John McCain, case in point), they lean closer to our values. Not one Republican voted for Harry Reid's health care horror. Frustrated, many of you yell, "There is no freaking difference between either party!" That simply is not true. Thus, our efforts are best served getting the Republican party back on track rather than forming a third party.
I realize that the idea of "We the People" starting a third party is romantic, seductive, and empowering. But it is living on Fantasy Island rather than in the real world. Running third-party candidate Ross Perot against George Bush, Sr. is how Bill Clinton, the long shot, won the election. Perot took votes from Bush more than from Clinton. Attempting to form a third party again would be like a movie sequel: "Ross Perot II: This Time, It's Devastating."
Now, while I am against forming a national third party, running third-party candidate Doug Hoffman in New York was a good thing. The Republicans betrayed us by selecting and heavily funding ($900,000) a leftist candidate, Dede Scozzafava, for New York's 23rd congressional district. We tea party patriots around the country just said, "No!" We rallied around Hoffman, sending national support and funds for the local race. Despite both parties ganging up on Hoffman (outrageously, Scozzafava, the Republican, dropped out and endorsed the Democrat), our Conservative third-party candidate nearly won. Hoffman's near-victory sent a powerful message to both parties. They now realize that we are a force to be reckoned with. There's a new sheriff in town whose name is the tea party movement.
I would be extremely leery of any self-appointed leader of the tea party movement. If we are to have a leader, his or her emergence will happen spontaneously via the people.
With great optimism and anticipation, I enter 2010. This is the year in which politicians who have ignored our voices and betrayed their duty to uphold the Constitution will experience the shock and awe of our wrath at the polls in November.
As to the theory that the Tea Party Movement needs a leader -- like the line in the Mel Brooks movie Blazing Saddles that goes, "Badges? We don't need no stinking badges," I say, "Leader? We don't need no stinking leader!" We the people are doing just fine.
-Lloyd Marcus, (black) Unhyphenated American, singer/songwriter, entertainer, author, artist, and tea party patriot.