Warning: mysqli_free_result() expects parameter 1 to be mysqli_result, bool given in /var/www/html/americanthinker/admin/common/functions/func.general.php on line 126
 The Left's Pied Piper - American Thinker
|

Oh, how the Left yearns for the thrilling days of yesteryear, when Barack Obama played his flute to the tune of Hope and Change, and not just the country, but the world followed in unison with a smile on its face and a beat in its heart. But at present, it is the Left who will have to hope that change isn't coming, because as a result of many misplayed notes, their pied piper has led them to drown in the river.

A Moderate He Was Not
Today, Obama could be a moderate only if he stayed at a Holiday Inn Express last night. When he has governed, it has been exclusively from the far-left end of the political spectrum. He has openly supported far-reaching measures, including (but not limited to) cap-and-trade, card check, universal health care, and comprehensive immigration reform. All of these initiatives would culminate in the destruction of what we've come to know as the unrivaled American way of life and the creation of a new, larger underclass willing to support a never-ending Democratic majority and its intention to lead a permanent left-of-center society.
To reach such an end, Obama has outsourced the legislative heavy lifting to the radical liberal supermajority in Congress and assembled an executive team full of hard-nosed Chicago political hacks and radical, unconfirmed, and unaccountable czars from various political sectors. In the process, he has stood by silently as hyper-partisan congressional leaders Harry Reid and Nancy Pelosi have spat on his faux campaign pledge of bipartisanship and forced their colleagues to assume complete ownership of one unpopular piece of legislation after another. Moreover, radicals Van Jones, Anita Dunn, and Ron Bloom became household names, which further served to debunk the centrist myth the president perpetrated on the campaign trail. 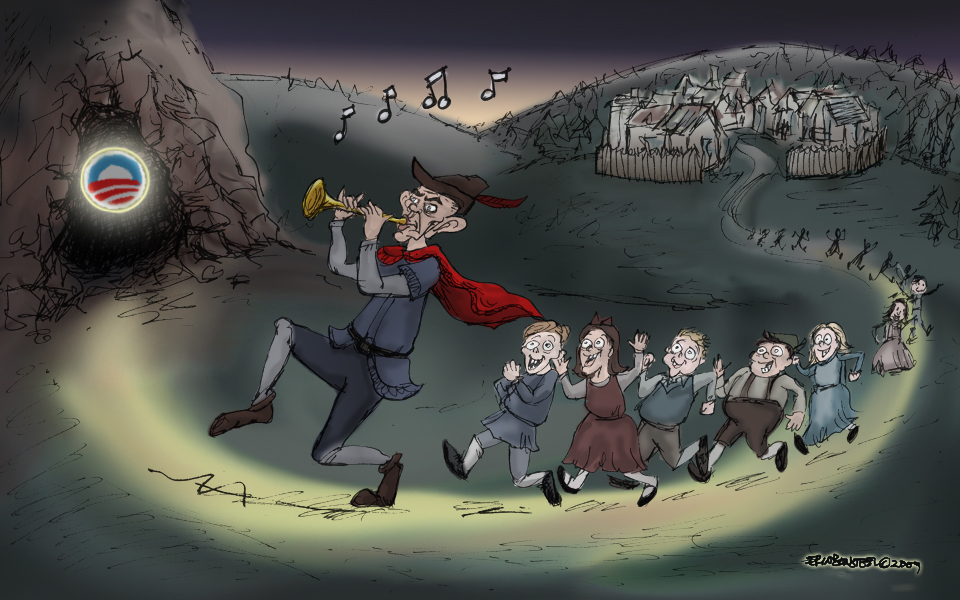 Meanwhile, the Republican Party wisely accepted their well-earned title as the Party of No and avoided the stench of the congressional liberal elitists, who believe so strongly in their own ideology that they've willfully ignored the will of the people for their own satisfaction.
A Mandate That Was Not
Obama has made health care reform the signature item of his New Foundation. In doing so, he's ignored or forgotten that 63% of voters who participated in exit polls following the 2008 presidential election stated that the economic crisis was their greatest concern, and they believed he was the right man to cure the ailment. However, the president has focused on radicalizing the economy, not repairing it. Under his leadership, the federal government has intruded into the auto and insurance industries and seized further control of the banking, residential real estate, and student loan industries.
Was health care reform a bridge too far?
While both sides of the aisle have stated there is a necessity for reform, Obama has manufactured a health-care crisis -- one that needs to be resolved as quickly as possible and which calls for a government takeover of a sector that represents one-sixth of the nation's economy. This is a crisis that people have been forced to watch their government feverishly deal with while the same government turns a blind eye to the facts that unemployment has exceeded double digits, people are still losing their homes via foreclosures and filing for bankruptcies at record rates, and consumer confidence continues to wallow below expectations.
Obama's best shot at dealing with these issues has consisted of a fraudulent trillion-dollar stimulus plan, extended unemployment benefits and whatever other small handouts he can bribe the electorate with, and a phony website like opportunity.gov, which gives the appearance that he's trying to do something, but it really just encourages people to pursue higher education with resources that are already readily available to them. So they leave the work force, which allows the Bureau of Labor Statistics to exclude them from the department's unemployment calculations.
Things are so bad that even the left-leaning Los Angeles and New York Times have called for Obama to shift gears to fixing the economy and leave health care alone...for now.
The Consequences That Are
Recently, 50% of those who participated in an Allstate/National Journal Heartland Monitor poll stated they would probably or definitely vote for someone else if Obama were currently up for reelection, and the Republicans have assumed a double-digit lead in various Generic Congressional Ballot polls.
Surprised?
Obama's domestic policy is destructive, and the American people do not want to live in a high-unemployment, high-tax, cradle-to-grave welfare nanny state. Furthermore, his foreign policy has failed to advance American interests, and "smart power" and diplomacy haven't made citizens feel any safer at home, as it is still apparent that radical Islamic terrorists want them dead. As a result of his falling popularity, it's no surprise that we've witnessed the defeats of liberals Creigh Deeds in Virginia and Jon Corzine in New Jersey, and now Scott Brown smashed the greatest home run in Massachusetts history since Carlton Fisk's shot down the line in '75.
Noticeably, it's an inopportune time to be Obama or one of his soldiers following along as he plays his flute. The glorious notes of Hope and Change called on the public to hope that his transformation of America would result in "a more perfect union" and to accept that change was a necessity before us because "for everywhere we look, there is work to be done." But while the people have rejected Obama's America, they've accepted that there's work to be done.
For starters, they've thrown the drowning Left an anchor.
J.C. Arenas is a frequent contributor to American Thinker and welcomes your comments at jcarenas.com.
|