By Paul B. Matthews

During his State of the Union speech, President Obama called for legislation that will ensure that payments on federal student loans are never more than ten percent of the borrower's discretionary income. Moreover, the president reiterated a proposal made earlier in the week that would forgive student loan debt after ten years of public service and after twenty years for everyone else.

The president's proposal is an absolute charade, a ploy that would make Charles Ponzi and Criss Angel proud. The proposal also reveals the president's utter ignorance about basic economic principles and reiterates the hypocrisy that so often permeates his speech.
First of all, to a large extent, the Obama plan is little more than a reinvention of existing government policy. Why? Because the Income Contingent and the Income Based repayment plans currently offered by the Department of Education limit the monthly payments graduates are required to make. Moreover, public-sector employees already qualify for student loan forgiveness under a 2007 program created by former President George W. Bush. Under the College Cost Reduction and Access Act of 2007, federal and state agencies may "repay up to $10,000 in Federal student loans per employee per calendar year, with a cumulative maximum of $60,000 per employee."
If that weren't insulting enough, as Obama was using his right hand to bamboozle America with a proposal to freeze spending to save a paltry $15 billion next year, his left hand was busy creating another unfunded government liability that will add billions to future budget deficits.
Specifically, let us assume a graduating student with a government PLUS loan makes every monthly payment under a standard 25-year repayment schedule. Using the current interest rate available to consolidate a government PLUS loan (3.28%), nearly 70% of the beginning loan balance would be forgiven by Obama for working in the public sector. For those employed in the private sector, 27% of a beginning loan balance would be forgiven. 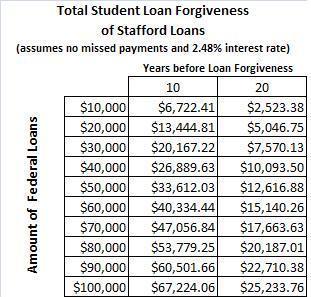 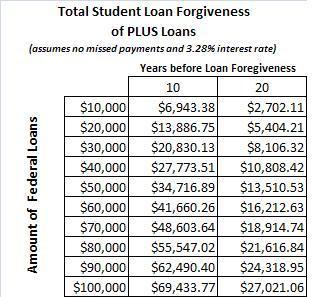 For all Federal Stafford Loans (subsidized or unsubsidized), using the current loan consolidation interest rate of 2.48%, 67% of the beginning loan balance would be forgiven for public sector service, while 25% of the beginning loan balance would be forgiven to those employed in the private sector.
Of course, simple mathematics dictates that if interest rates were to increase, the total percentage of principle forgiven under the Obama proposal would rise substantially. In addition, if the loan repayment cap equal to more than 10% of discretionary income prevented a student from making a full principle and interest payment (as dictated by the terms of standard payment schedule), this too would increase the total percentage of principle forgiven. In fact, it is conceivable that under Obama's repayment cap proposal, the federal government could forgive an amount equal to more than 100% of the beginning student loan balance -- a virtual reincarnation of the insidious interest-only loan, this time applied to student loans instead of sub-prime home mortgages.
Clearly, this plan would trigger a massive redistribution of wealth from blue-collar America to the educated class, since taxpayers would now be forced to subsidize the future principle payments of nearly everyone receiving a college degree, a master's degree, a law degree, or another professional degree.
To illustrate this point, let us use the president's own figure (as stated during the State of the Union) that 8 million Americans are currently enrolled in college. Second, we will assume that the average student compiles $23,200 in student loan debt while earning an undergraduate degree, a figure reported by the Project on Student Debt based on a survey of graduating undergraduate students in 2008. With this basis, the Obama student loan forgiveness program has a pool of over $185 billion to potentially forgive in just the next four-year period.
However, this estimate is extremely conservative, particularly since medical and law students often complete graduate school with well over $100,000 in total student loan debt. Moreover, should the total number of college students increase beyond 8 million, or if the average total level of debt assumed by students expanded beyond $23,200 (a fairly safe assumption), this $185-billion figure will balloon substantially.
And herein lies the hypocrisy inherent in the Obama proposal. After repeatedly denigrating the past eight years during his State of the Union speech and blaming the (alleged) $1-trillion deficit he inherited on two wars that were not paid for and a prescription drug program that was not paid for, President Obama has the audacity to look America in the eye and propose an unfunded program that will cost a minimum of $40 billion per year in perpetuity?
Let's not forget that the Obama plan would also significantly increase the power of the federal government. In an era where government pay czars have already attempted to control pay levels of executives and mid-level managers of firms that received TARP money, Americans should be extremely leery of accepting any government handout, particularly since the earlier acceptance of government money might be used later to require the further abdication of individual liberty.
Although this plan is a clear threat to individual liberty and will trigger another monstrous hole in the federal budget, perhaps the most ominous hazard created by the proposal is the carte blanche given to universities to continue to drive up tuition costs at rates far beyond the general inflation rate. In fact, while U.S. consumer prices rose by just 2.7% in 2009, tuition increased substantially more. This trend has persisted for over thirty years.
According to the College Board, the average tuition at an American public university (for 2009-10) increased 4.5% to $7,020 from 2008 to 2009. At private schools, tuition rose to $26,273, a 6.5% increase. Tack on the costs of fees, books, and room and board, and the total cost to attend a public university rose to $19,388 in 2009 (a 5.6% increase), while the cost of a private university rose to $39,028 (a 4.4% increase).
Under an expanded debt forgiveness regime, there will be no incentive for universities to control costs (a potential boondoggle for professor and university administrative salaries), and thus tuition rate increases will likely continue to far outpace inflation. After all, what difference will it make if a student graduates with $20,000 or $1 million in student loans, particularly if the government will simply forgive any outstanding federal student loan balance after ten or twenty years?
Lastly, by creating this edict, the federal government will further trigger a serious misallocation of resources within the American economy. As often happens whenever the government distorts a market -- whether it is the automobile market (cash for clunkers) or the housing market (via the lax credit standards of the Community Reinvestment Act) -- economic resources are simply not properly allocated. Accordingly, any plan that guarantees forgiveness of higher education debt will naturally attract more resources, thereby crowding out resources that would normally be directed toward other endeavors. In such an environment, innovation, entrepreneurship, general economic growth, and job creation will be stifled.

The American economy and the future of the republic are at a crossroads. With a projected 2010 federal deficit of over $1.35 trillion and a federal debt rapidly approaching 100% of gross domestic product, now is not the time to create new entitlements, expand the deficit, or adopt measures that will restrict job growth.

Let us hope that this proposal dies on the vine before it is allowed to flower. And let us all pray that American voters are intelligent enough to defeat any politician who supports such a senseless policy come November.

Paul B. Matthews holds an MBA from the University of Texas and is a Texas-Licensed Certified Public Accountant (CPA).  He is a former hedge fund manager and resides in Austin, TX.