Warning: mysqli_free_result() expects parameter 1 to be mysqli_result, bool given in /var/www/html/americanthinker/admin/common/functions/func.general.php on line 126
 Global Warming and the Science Fair Test - American Thinker
|

By Andrew Thomas
Hypothesis: If the Nobel Prize-winning IPCC scientists submitted their climate change research as a grade-school science fair project, it would fail miserably.
Of course, my hypothesis rests on some assumptions. The first is that science will continue to be taught in our public schools, since some forward-thinkers at Berkeley High School seem to think that lab science is just for whites.
The second assumption is that the science fair judges (usually teachers) are unbiased toward climate change "science" and actually understand the scientific method. This is a tall assumption, since global warming propaganda is more and more becoming part of the curricula they teach, while the scientific method takes a back seat.
To support my hypothesis, I use as my reference "Understanding and using The Scientific Method," a how-to guide to school science fair projects from Sciencemadesimple.com:

The first step of the process is "Observation":

For this stage of the Scientific Method, it's important to use as many sources as you can find. The more information you have on your science fair project topic, the better the design of your experiment is going to be ...

How well did the IPCC do in collecting the observations that have been used to develop their hypothesis? Well, the term "cherry-picking" seems apropos. None of their erstwhile "scientific" observations have included solar cycle or water vapor data, or the sixteen other sources of climate change -- only carbon dioxide data, which is highly suspect. 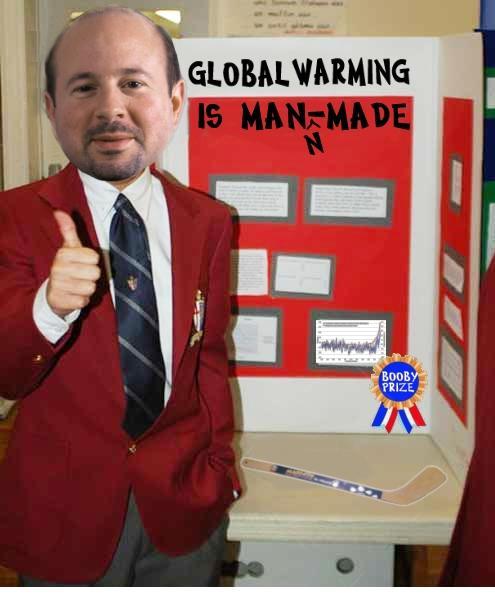 All of the observations of supposedly increasing global temperatures and resulting melting glaciers have been made by this U.N. agency with no substantiating objective evidence to support it.
In fact, a new report is out in which the IPCC admit that their predictions of melting glaciers in the Himalayas by 2035 was based entirely on unscientific "speculation" rather than the scientific evidence they claimed to have. "Criminal dishonesty" is a term that comes to mind in place of "speculation."
The second step in our science fair project is "Hypothesis":

The hypothesis is a simple statement that defines what you think the outcome of your experiment will be.

Substantially, the IPCC actually proposes four separate hypotheses:
Disproving any one of these negates the entire political climate change argument. None of these hypotheses have yet been proven. In fact, some IPCC scientists now admit that the Earth is cooling, refuting hypothesis #1.
Are atmospheric carbon dioxide levels increasing at a significant rate? According to NOAA, the current amount is estimated to be almost four-hundredths of one percent (about 387 parts per million) of our atmosphere. At the current rate of increase, in another five years, it will still not quite be four-hundredths of one percent. In fact, one new study has shown that carbon dioxide levels have remained stable for the past 160 years due to the Earth's capacity to absorb the gas. So hypothesis #2 is in doubt.
There is also much dispute over whether increases in carbon dioxide levels precede or lag behind increases in global temperature. Additionally, there is significant evidence that the changes in atmospheric carbon dioxide do not match the output of human emissions and may be primarily due to natural phenomena. These data cast doubt on hypotheses #3 and #4.
In the third step, "Prediction," the following advice is provided:

An incorrect prediction doesn't mean that you "failed." It just means that the experiment brought some new facts to light that maybe you hadn't thought about before. The judges at your science fair will not take points off simply because your results don't match up with your hypothesis.

However, the judges will take points off if you intentionally hide results that don't agree with your hypothesis. All facts must be considered using the scientific method, and contrary data should be pursued aggressively.
Contrast that with the behavior of the IPCC climate scientists.  As we now know from the released "Climategate" e-mails, scientists including University of East Anglia's Phil Jones and Penn State University's Michael "Hockey Stick" Mann actively bullied other climate scientists and suppressed dissenting evidence.
As is well-known by now, U.K. climate data has been faked and manipulated at East Anglia. Breathtaking revelations are now being brought to light that New Zealand and Russian data were also fabricated. The final straw is that now the U.S. government itself, through the National Climate Data Center (NCDC) and the NASA Goddard Institute for Space Studies (GISS), has been caught red-handed manipulating the data in support of the global warming hypothesis.
The fourth step is "Experiment":

The only means by which a scientist can prove whether a hypothesis is correct is if it is possible to prove it wrong. This is known as the principle of "falsifiability." Noted scientist Karl Popper developed this principle as a methodology for determining true science from "non-science."
Global warming morphed into the amorphous term "climate change" for the very reason that it makes the hypothesis impossible to disprove. Since the Earth's climate continually changes, all extraordinary climate phenomena -- i.e., earthquakes, floods, extreme heat, extreme cold, tsunamis, hurricanes, and absence of hurricanes -- can be attributed to "climate change."
Note actor Danny Glover's logic in making the case that the Haiti earthquake was caused by "global warming." Global warming, a.k.a. climate change, becomes "non-science," a.k.a. nonsense.
Finally, the "Conclusion":

Judge this science project yourself. Were the variables well-controlled? Are the multiple hypotheses sufficiently supported? Were flaws in the experimental design intentionally suppressed? I give the IPCC scientists a resounding F-.
But why would formerly-respected scientists lie, cheat, and subvert science at the behest of the U.N. and various world governments? The power that controls carbon dioxide output will effectively control every living thing on Earth. Isn't that reason enough? Q.E.D., hypothesis proved.