Warning: mysqli_free_result() expects parameter 1 to be mysqli_result, bool given in /var/www/html/americanthinker/admin/common/functions/func.general.php on line 126
 Berkeley's Unbearable Whiteness of Science - American Thinker
|

The racial madness that has left-wing America in its thrall finds its apogee in the Berkeley, California public schools. Berkeley High School is now poised to eliminate science laboratory classes because "science labs were largely classes for white students." Eric Klein writes in The East Bay Express:

The proposal to put the science-lab cuts on the table was approved recently by Berkeley High's School Governance Council, a body of teachers, parents, and students who oversee a plan to change the structure of the high school to address Berkeley's dismal racial achievement gap, where white students are doing far better than the state average while black and Latino students are doing worse.

Five science teachers will lose their jobs if the proposal is adopted when the School Board meets next week:

It will come before the Berkeley School Board as an information item at its January 13 meeting. Generally, such agenda items are passed without debate, but if the school board chooses to play a more direct role in the High School Redesign, it could bring the item back as an action item at a future meeting.

All Berkeley High students, whatever their race, would lose the opportunity to get a solid grounding in science, opening up the door to achievement in higher education and life via scientific study. Notes Klein:

Mardi Sicular-Mertens, the senior member of Berkeley High School's science department ... who has taught science at BHS for 24 years, said the possible cuts will impact her black students as well. She says there are twelve African-American males in her AP classes and that her four environmental science classes are 17.5 percent African American and 13.9 percent Latino. "As teachers, we are greatly saddened at the thought of losing the opportunity to help all of our students master the skills they need to find satisfaction and success in their education," she told the board.

So in order to "help" black and Latino students, the idea is to eliminate the opportunity for said students to make something of themselves through science. Those students who excel will be disfavored, while those who do not will be given more resources. The problem is that science training is one of the elements of educataion least susceptible to the multicultural indoctrination that pervades education in Berekeley (and far too many other places). Replacing science with something dreamed up by the education-school-trained "experts" is unlikely to bring any improvement, even for its purported beneficiaries. 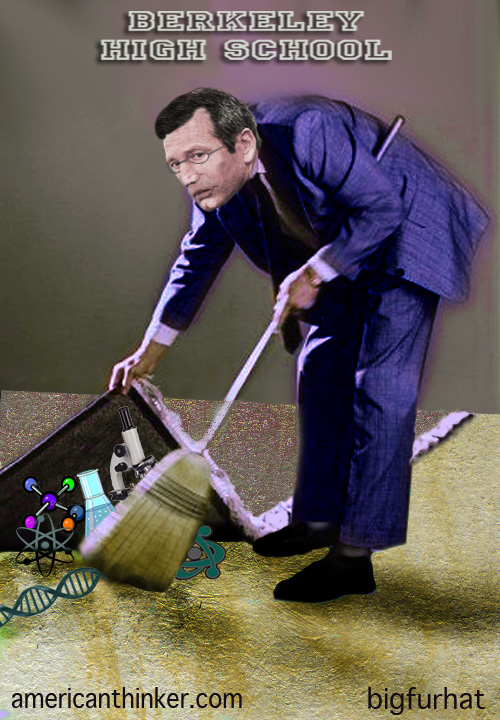 The sheer racism of identifying science as something primarily for whites seems not to penetrate the addled minds of those who fancy themselves advocates for black and Latino students. The absence of any consideration of Asian students is also striking. The city of Berkeley has more Asian households (12,641) than black households (10,874) or Latino households (8,466).

Consider that the university which makes its home in Berkeley and dominates both local employment and community's character has a majority undergraduate population of Asian students, thanks to the fact that California voters approved a state law eliminating racial preferences in state institutions. The science majors at the University of California, Berkeley overwhelmingly comprise Asian students. U.C. Berkeley also boasts 21 faculty members who have won Nobel Prizes, primarily in the sciences. The list of laureates includes two Asians and one Latino, all three science winners.
Aside from the repulsive racism of this move, the broader issue to be considered is whether society is better-served by cutting down the achievers and investing in the stragglers -- or whether everyone benefits from the achievements of those who apply themselves enough to excel. I have no hesitation in saying that I am in the latter camp. How does it benefit anyone to have an America made up of mediocre minds?

As a matter of simple justice, it makes no sense to favor those who do not adapt to the norms and expectations of schooling and persist in behaviors that lead to failure. Berkeley High's worse-than-average performance among black and Latino students almost certainly has something to do with the ideology informing its approach to racial problems. Teaching people that they are victims does nothing to encourage excellence. But rather than reconsider its failing efforts, Berkeley High is doubling the dosage of a medicine that isn't working, and which carries bad side effects.
If the Berkeley public schools go ahead with this plan, they deserve condemnation and ridicule on a national scale.
Hat tip: Larry