Warning: mysqli_free_result() expects parameter 1 to be mysqli_result, bool given in /var/www/html/americanthinker/admin/common/functions/func.general.php on line 126
 2010 Will Be Worse - American Thinker
|

The year 2010 is likely to be the pivotal year where pundits stop referring to the recession and begin openly talking about a depression.

Our economic problem is rather simple to describe: There is too much debt relative to income and/or wealth. Below is a single graph that depicts the condition of our economy. It shows total debt of the U.S. as a percentage of GDP from 1870 forward. The debt figure includes all private and public debt. It does not include liabilities associated with unfunded government mandates like Social Security and Medicare. (Note: according to the U.S. trustees of these funds, the present value of the liabilities is about $106 trillion. Including them would boost the ratio below to nearly 1,000%.) 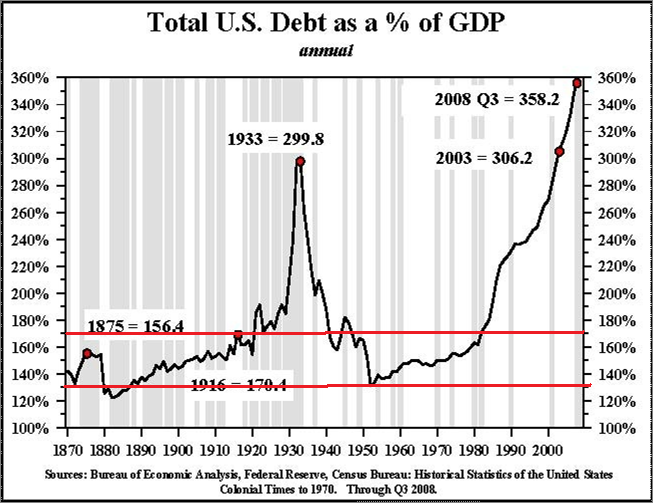 The amount of debt relative to GDP is staggering from a historical perspective. Several points are worth making about the graph:
No economic theory rationalizes a proper "norm," yet intuitively, we know that such a number exists. Debt must not exceed some percentage of income, or else it cannot be serviced. Equivalent conceptual ratios for individuals and businesses have been used by the banking industry as lending criteria for more than a century. For various reasons, banks neglected these guidelines over the past couple of decades, contributing greatly to the credit bubble.
The government has decided that the cure for too much debt is more debt. This solution cannot work, especially when credit is already so overextended. Income and wealth cannot support present debt levels. Credit will adjust back to the mean, regardless of what the government attempts. Whether this is via orderly payment or via default, the reduction in debt is inevitable.
Ludwig von Mises addressed the limits of credit in The Theory of Money and Credit, originally published in 1912. As he expressed in later work:

There is no means of avoiding the final collapse of a boom brought about by credit [debt] expansion. The alternative is only whether the crisis should come sooner as the result of a voluntary abandonment of further credit [debt] expansion, or later as a final and total catastrophe of the currency system involved.

In 2009, it was not possible to finance U.S. capital requirements through conventional markets. Only via the Fed's explicit (and surreptitious) Quantitative Easing was the government able to fund its 2009 deficits. Discussing 2009, Zerohedge stated:

There was a huge credit and liquidity crunch, and then there was Quantitative Easing. The last is the Fed's equivalent of band-aiding a zombied and ponzied corpse, better known as the US economy. It worked for a while, but now the zombie is about to go back into critical, followed by comatose, and lastly, undead (and 401(k)-depleting) condition.

Zerohedge estimated that demand (financing) for U.S. fixed-income securities must increase elevenfold in order to fund capital needs in 2010. Continued shrinkage in foreign participation in U.S. fixed-income markets makes that increase impossible.
There are only three possibilities with respect to meeting 2010 funding needs:
None of these alternatives is attractive. The unpalatable choices arise from prior Fed and governmental policies. To avoid recessions over the past fifty years, the government abused and then finally exhausted all reasonable options. After years of mismanagement, the government is in a quandary of its own making from which there is no escape.
All alternatives will be very painful, and none offer the possibility of a traditional recovery. No matter what alternative is chosen, the country cannot avoid a depression. At this point, "do no further harm" should guide policy.
Of the three alternatives, what is best economically is worst politically. This natural conflict between good economics and good politics is not unusual. Economically, the country would be harmed least by implementing alternative 2. From a political standpoint, alternatives 2 and 3 are probably unacceptable. Thus, it is likely that alternative 1 will be tried (again!). It is precisely the continual overuse of this alternative that has led to the current sad state.
Alternative 1 cannot work. It will not avoid a depression. Worse, it will likely result in hyperinflation. Thus, we likely end up with the worst of all worlds. With hyperinflation, money will cease to be a medium of exchange. Markets will cease to work, except on a barter basis. The middle class will be wiped out. Their savings will become worthless along with the dollar. The end will be as Mises warned so many years ago.
The possibility of losing our form of government is a real risk under any of the alternatives. So is civil unrest and strife. All are probably more likely under alternative 1 because of the corrosive effects of high inflation combined with a depression.
Beware the turn of the calendar. Things are going to get interesting, and probably very quickly.
Monty Pelerin blogs at economicnoise.com.
|