Warning: mysqli_free_result() expects parameter 1 to be mysqli_result, bool given in /var/www/html/americanthinker/admin/common/functions/func.general.php on line 126
 Social Democrats Versus a GOP in Search of an Ideology - American Thinker
|

Social Democrats Versus a GOP in Search of an Ideology

By Lee Cary
In the struggle between the two major political parties, the advantage goes to the one that can articulate that for which it stands. Democrats today have the advantage.
Today's Democrats resemble the Fabian Society born in London in 1884.
William Clarke wrote the Preface and lead essay in the 1908 edition of The Fabian Essays In Socialism.  He recited the group's objective:

The Fabian Society consists of Socialists.  It therefore aims at the reorganization of society by the emancipation of land and industrial capital from individual and class ownership, and the vesting of them in the community for the general benefit. In this way only can the natural and acquired advantage of the country be equitably shared by the whole people ... The society, further, works for the transfer to the community of the administration of such industrial capital as can be managed socially.

Clarke and the Fabians believed that "social transformation must be gradu

al" and accomplished through a "series of reforms for effecting the gradual change of society into a really social democratic state." To symbolize their slow-but-steady plans, they chose a tortoise as their symbol.
George Bernard Shaw, perhaps the most famous Fabian, claimed the group's opponents represented "Unsocialism."

As against Socialism, the gambling spirit urges man to allow no rival to come between his private individual powers and Step-mother Earth, but rather to secure some acres of her and take his chance of getting diamonds instead of cabbages. This is Private Property, or Unsocialism. (Shaw, "Economics")

The 20th-century Progressive movement in America was a cousin of the Fabians. Their agendas were widely compatible. And although Democrats today deny it, the Democrat Party has, at least since FDR's New Deal, been incrementally morphing into the Social Democrat Party.
Meanwhile: Where is the ideological opposition? Who speaks as a political counterforce? What is the Republican rebuttal?
On balance, the weight of GOP language today leans more heavily on less government than on more freedom. Today's GOP is positioned as Shaw's "Unsocialists." To survive and thrive in the 21st Century, the GOP must claim clearly and forcibly that for which it stands, and soon.
Perhaps it might find ideas from the now-silent voice of Ludwig Heinrich Edler von Mises (1881-1973). 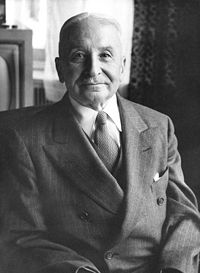 In 1940, the Austrian economist von Mises lived in Switzerland in fear for his life because he was a Jew. So he immigrated to New York City, becoming a visiting professor at New York University, and from there he taught until he was 87 years old. His book, simply titled Socialism, first appeared in 1922. It's a classic manual for rebutting socialism. Portions of it read as though written to confront today's Democrat party. For example:
"Spread the wealth" is a Democrat mantra. To address that concept, von Mises wrote,

[T]he principle of equality is most acclaimed by those who expect to gain more than they lose from an equal distribution of goods. Here is a fertile field for the demagogue. Whoever stirs up the resentment of the poor against the rich can count on securing a big audience. (Socialism, 1981 LibraryClassics edition, p. 66)

The redistribution of goods with the object of restoring the equality of property and wealth is at the back of the mind of the ordinary man whenever he thinks of reforming social conditions, and it forms the basis for all popular proposals for socialization. (241)

The cover of the February 16, 2009 issue of Newsweek reads, "We Are All Socialists Now." In the accompanying article, the authors (one of whom, Evan Thomas, is the grandson of the six-time presidential candidate of the Socialist Party of America, Norman Thomas) conclude that

Obama talks of the need for smart government. To get the balance between America and France right, the new president will need all the smarts he can summon.

The Newsweek writers assume that smart socialism can succeed where dumb socialism has failed. To address that notion, in a section of Socialism entitled "The Impracticability of Socialism," von Mises wrote,

The more communal enterprise extends, the more attention is drawn to the bad business results of nationalized and municipalized undertakings. It is impossible to miss the cause of the difficulty: a child could see where something was lacking. So that it canned be said that this problem has not been tackled. But the way in which it has been tackled has been deplorably inadequate. Its organic connection with the essential nature of socialist enterprise has been regarded as merely a question of better selection of persons. It has not been realized that even exceptionally gifted men of high character cannot solve the problems created by socialist control of industry. (187)

In short, socialism fails because it's a failed system.
The proponents of bailouts for banks, insurance, and auto companies argued that government ownership was necessary to make those enterprises competitive. But von Mises refuted the notion of a socialized free market.

The market is thus the focal point of the capitalist order of society; it is the essence of Capitalism. Only under Capitalism, therefore, is it possible; it cannot be "artificially" imitated under Socialism.
The advocates of the artificial market, however, are of the opinion that an artificial market can be created by instructing the controllers of the different industrial units to act as if they were entrepreneurs in a capitalistic state. They argue that even under capitalism the managers of joint stock companies work not for themselves but for the companies, that is to say, for the shareholders. Under Socialism, therefore, it would be possible for them to act in exactly the same way as before, with the same circumspection and devotion to duty. (119)

To those who suggest that the United Auto Workers deserved a stake in the ownership of General Motors and Chrysler; von Mises called that arrangement "Syndicalism."

As political tactics Syndicalism presents a particular method of attack by organized labour for the attainment of their political ends. This end may also be the establishment of the true Socialism, that is to say, the socialization of the means of production... Syndicalism like Socialism aims at the abolition of the separation of worker from the means of production, only it proceeds by another method. (239)

Republicans and Democrats are engaged in a battle of ideas. In that battle, the GOP is not well-armed, nor does it match the conviction and zeal of the Social Democrat Party. The GOP has failed to present its own clear and compelling vision of America. In short, it acts like a permanent opposition party.
Consequently, the Democrats are driving the political debate and, with their majorities among elected public officials, the votes to enact their ideology.

Only ideas can overcome ideas and it is only the ideas of Capitalism and of Liberalism [von Mises used the 19th-century definition of "liberalism" that is essentially the opposite of its current meaning] that can overcome Socialism. Only by a battle of ideas can a decision be reached." (459-460)

The second decade of the 21st Century will witness a historic battle between American political ideologies. Democrats have one already defined. Republicans will struggle to find theirs. The future profile of the nation depends on the outcome.
Meanwhile, conservative citizens -- not elected GOP officials -- are pushing the rebuttal to socialism into the arena of public discussion.
|