Small Business Gets a Big Lump of Coal for Christmas

By Andrew Foy and Brenton Stransky
Starting with the small business jobs summit and proceeding to his small business tour, which kicked off at Home Depot...wait a second...the president and his administration have been playing obsequious court to the small business community over the previous weeks. But despite the president's efforts, small business is languishing, and its economic prospects look grim. If this administration really wants to help small business, it needs to take a look in the mirror and recognize that its own policies are making a bad situation worse.
A small business is usually defined as a company worth less than $25M. In the United States, small business drives economic growth, and without its expansion, overall economic improvement is unlikely to occur. According to the National Telecommunications and Information Administration (NTIA), small businesses employ over 57% of the private workforce and are responsible for over half of the innovations over the last century. These jobs are also "stickier." According to a recent CNN article, of the 5.3 million jobs cut this year, only 37% are from small business.
The National Federation for Independent Business releases a monthly report on economic trends for small business. The December 2009 report reveals that "owner optimism" remains stuck at recession levels. Inventory investment plans are at historically low levels, capital spending is on hold, more firms plan on reducing employment than on adding to their payrolls, and inventory reductions are widespread. 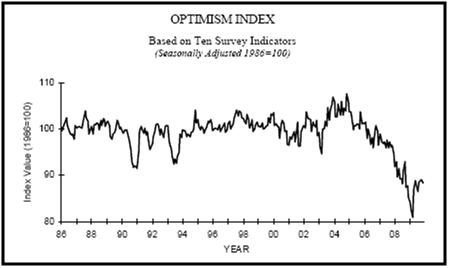 Taking a closer look at capital spending trends reveals the following figures. A record-low (data first collected in 1979) 44% of all firms reported decreased capital outlays over the past six months, and only 16% of all firms plan to make capital outlays over the next few months. Capital spending is on the sideline, but why? As the report explains:

The "turbulence" created when Congress is in session is often debilitating, this year being one of the worst. Themes including "tax more," "tax the rich even more," "VAT taxes," higher energy costs due to Cap and Trade, mandates and taxes for health care, threats of "stimulus II," incomprehensible deficits, and a huge pool of liquidity created by the Federal Reserve Bank that threatens price stability and higher interest rates. The list goes on and on. There is not much to look forward to here and good reason to "keep your powder dry." Uncertainty is the enemy of the real economy as well as financial markets.

Milton Friedman formulated his macroeconomic theory on the idea that government policies can stabilize or destabilize the economy based on the degree of uncertainty they create. Friedman's theory is called Monetarism, and it postulates that the government cannot micromanage the economy because business-owners, investors, and consumers will become suspicious of what the government is doing and shift their behavior. This reaction is known as rational expectations.
Monetarism and rational expectations, in a simplified sense, are like the law of gravity -- what goes up must come down. Likewise, what money the government spends today must be paid for by higher taxes or rising interest rates down the road.
Based on the theory of Monetarism, one can postulate that government programs that increase spending (whether directly financed or through deficit spending) will lead to decreased business investment, consumer spending, and economic growth because business-owners and consumers will not spend and invest out of concern that they will face higher taxes either immediately or closely down the road. Using this theory, one can also postulate that government programs that decrease spending or directly decrease taxation will lead to increased business investment, consumer spending, and economic growth.
Alberto Alesina's work has lent considerable evidence to the above theory. Alesina et al. found that the best way to stimulate investment and make an economy grow is to cut government spending, while the best way to usher a decline is to increase government spending and taxation. Alesina et al. studied econometric data for eighteen large OECD member countries to assess the effects of government spending and taxation on economic growth and investment. The authors reached these important conclusions: 1. Increased government spending and increased taxation reduce profits; and 2. Economic growth is implemented by spending cuts, whereas economic decline is implemented by increased government spending and taxation.
The effects of these policies on business investment are profound, and Alesina et al. noted a significant correlation between government policies, business investment, and economic growth. During economic expansions government spending decreased (-1.6%) and business investment increased substantially (+5.6%). Compare this to the current administration, which is increasing government spending at a historical rate. It's not hard to figure out why small business capital is sitting on the sidelines and more firms are planning to decrease payroll rather than expand it.
What small business wants for Christmas is relatively clear: a sound fiscal policy, decreased government spending, a lower tax burden, and a reasonable regulatory environment. They're more likely to see the president give his next small business rally at a Walmart.
Andrew Foy, M.D. and Brent Stransky are authors of the upcoming book The Young Conservative's Field Guide and can be contacted through their website at www.aHardRight.com.
|