Warning: mysqli_free_result() expects parameter 1 to be mysqli_result, bool given in /var/www/html/americanthinker/admin/common/functions/func.general.php on line 126
 Revenge of the Computer Nerds - American Thinker
|

Revenge of the Computer Nerds

It is fascinating to watch the mainstream media in America duck (and/or make excuses for) the greatest scam in modern history: the "science" behind man-made global warming. Even more entertaining, and far more enlightening, is to follow the analyses by the experts in computer programming of the recently disclosed methods used by the Climate Research Unit (CRU) from the University of East Anglia.

Most commentators in the media have been talking about the "REM" statements in the purloined e-mails and computer codes from the CRU [i]. True believers in anthropogenic global warming (AGW), especially those in the mainstream and "scientific" media, are pooh-poohing such words as "tricks" or "hide the decline" as interoffice slang that had no real impact on how the science was conducted.
But the real action (and the evidence for chicanery) is in the computer code obtained from the CRU. Our own computer guru Marc Sheppard, writing for American Thinker here and here, was one of the first to offer an accurate diagnosis of this fraudulent method of computer programming. Analyzing the code, as Marc has indicated in his work, is a complex business. As he pleads in one article, "please bear with me while I get a tad techie on you."
For the layman readers of American Thinker, I want to explain in a simple manner what went on in the construction of one piece of the controversial programming.
A bit of background: The cornerstone of the evidence for global warming presented by Al Gore and the AGW crowd was a notorious graph that became known as "the hockey stick graph." The graph is based on computer models that supposedly prove our planet has heated exponentially in the last half-century due to increasing amounts of man-made CO2 released into the atmosphere. Proponents further claim (and the computer models purport to show) that temperatures will continue to increase exponentially. The implication is that unless we drastically curtail human output of CO2, the "escalation" in temperature is going to get even worse even faster.
Turns out that these claims are absolutely false, and the computer models have been rigged.
Here is one version of the famous "hockey stick" graph: 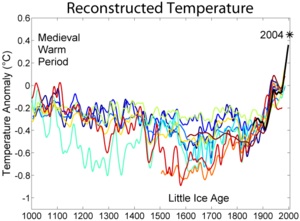 Now that is scary [ii]! According to the now-debunked myth, global temperatures started going through the roof about sixty years ago. They will to continue to rise and bring unimaginable disaster. Except they haven't, and they probably won't.
Now to the CRU code that maintains these fictional monstrosities. Pay particular attention to the black line at the far right of the "hockey stick" in Graph 1. The black line starts at about 1900. (This is the same period of time addressed by the code we will examine.) The black line looks something like this very simplified version: 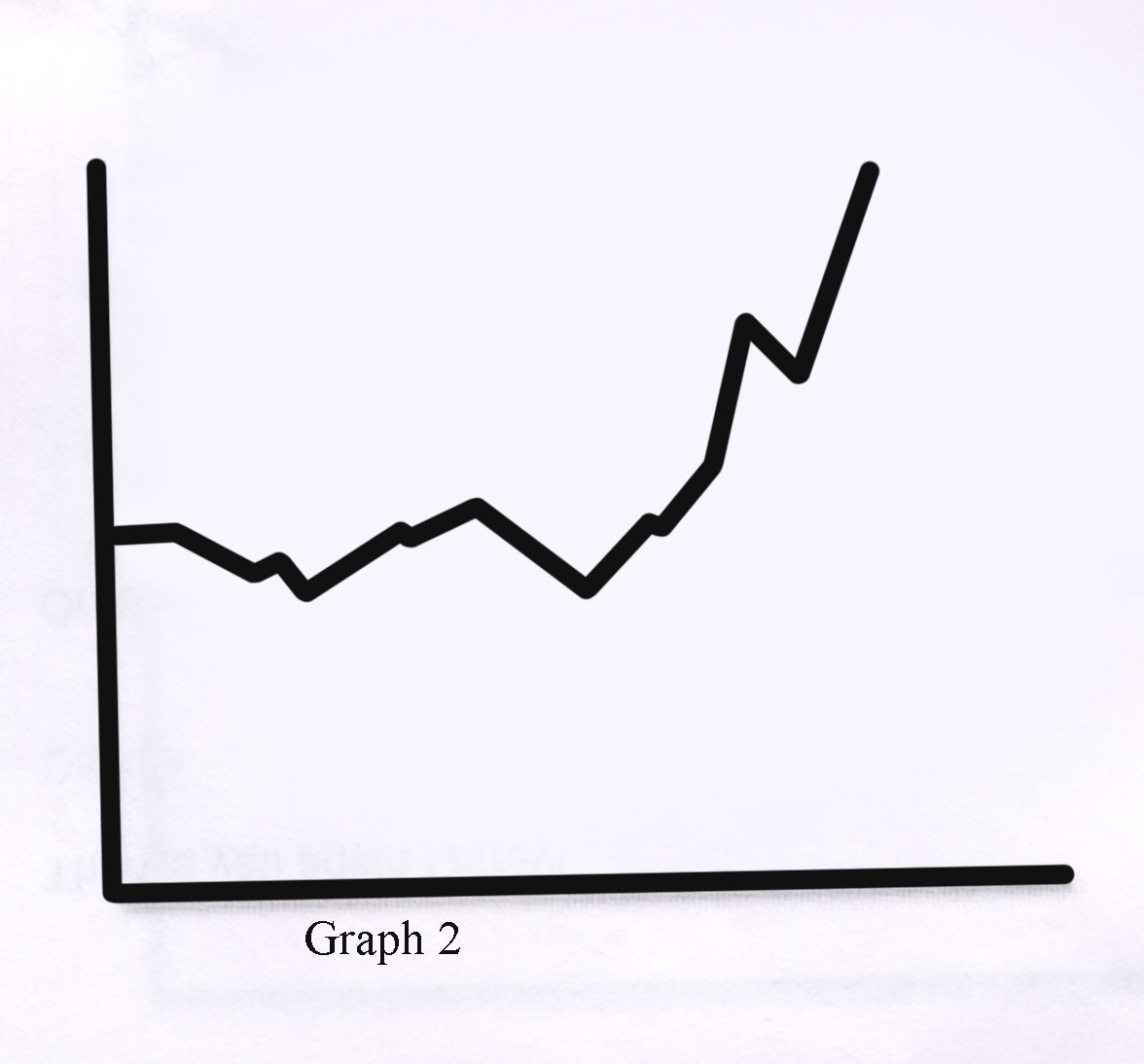 The x-axis (horizontal) shows time. The y-axis (vertical) shows temperature. In the last few decades, the temperature, according to AGW enthusiasts, has been climbing off the charts.
Marc Sheppard discovered and showed us this bit of programming taken from the CRU documents:

The long string of bold numbers in the second set of brackets is the "fudge factor" applied (supposedly) to the raw data [iii]. This string of numbers "adjusts" the raw data from 1904 to 1994 in five-year increments. Here is what these nineteen numbers roughly look like on a simple graph (each bar below represents a number in bold above): 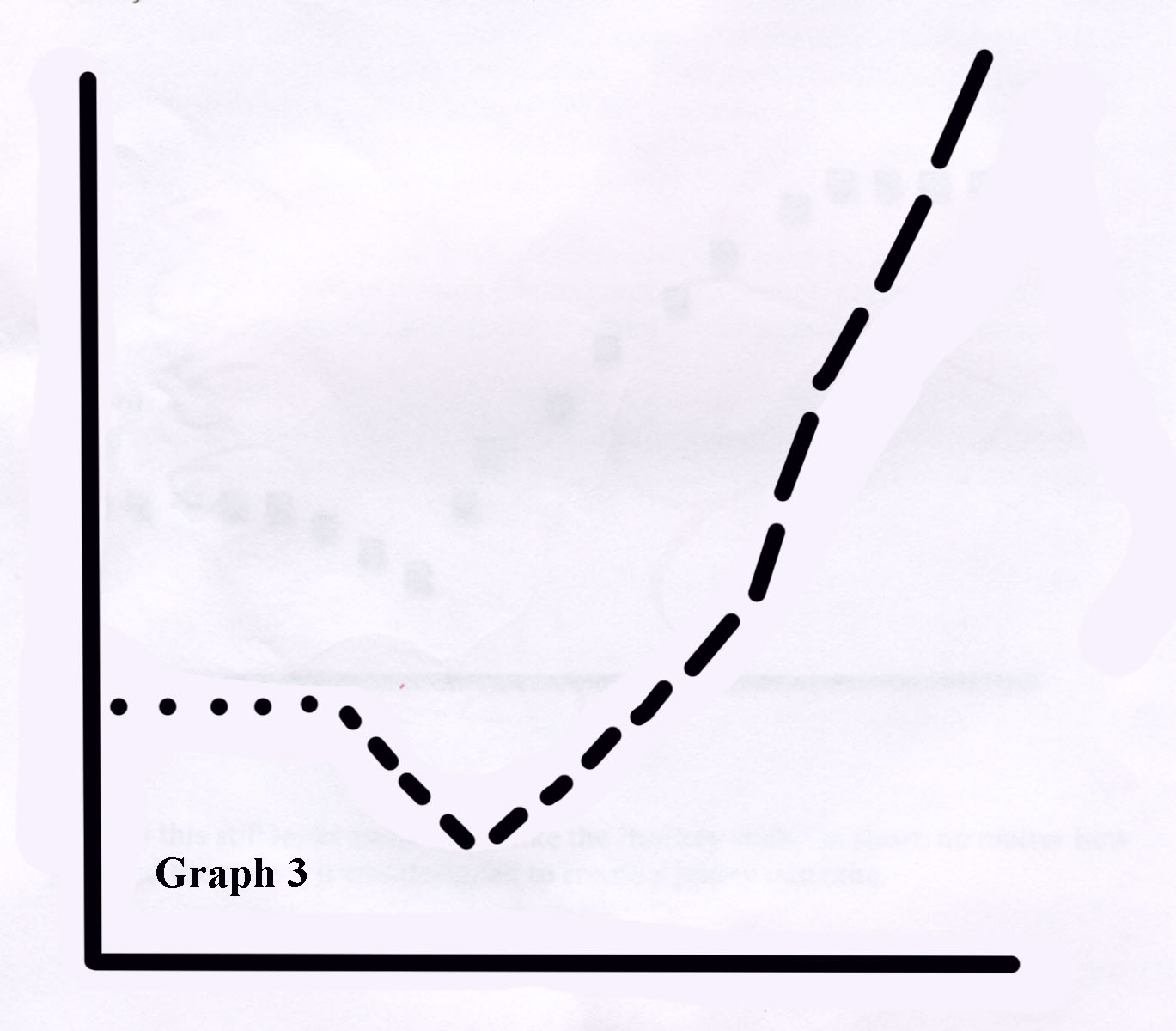 I have left a space between the bars that represent each number so the reader can compare the temperature line to the numbers from the program. Time is once again indicated by the x-axis (horizontal). Temperature is portrayed on the y-axis (vertical).
The numbers in the code indicate a degree of cheating that is actually much larger than I was able to show with the bars in Graph 3 [iv].
We can now prove beyond a shadow of a doubt that the hockey stick is an absolute ruse. The hockey stick graph cannot possibly be based on the actual data. (...Wherever and whatever that data might have been, that is. The CRU has admitted destroying the raw data.)
Even if the numbers in the program were not added to the aggregate temperatures (of each preceding period [v]), the numbers in the code plot like this: 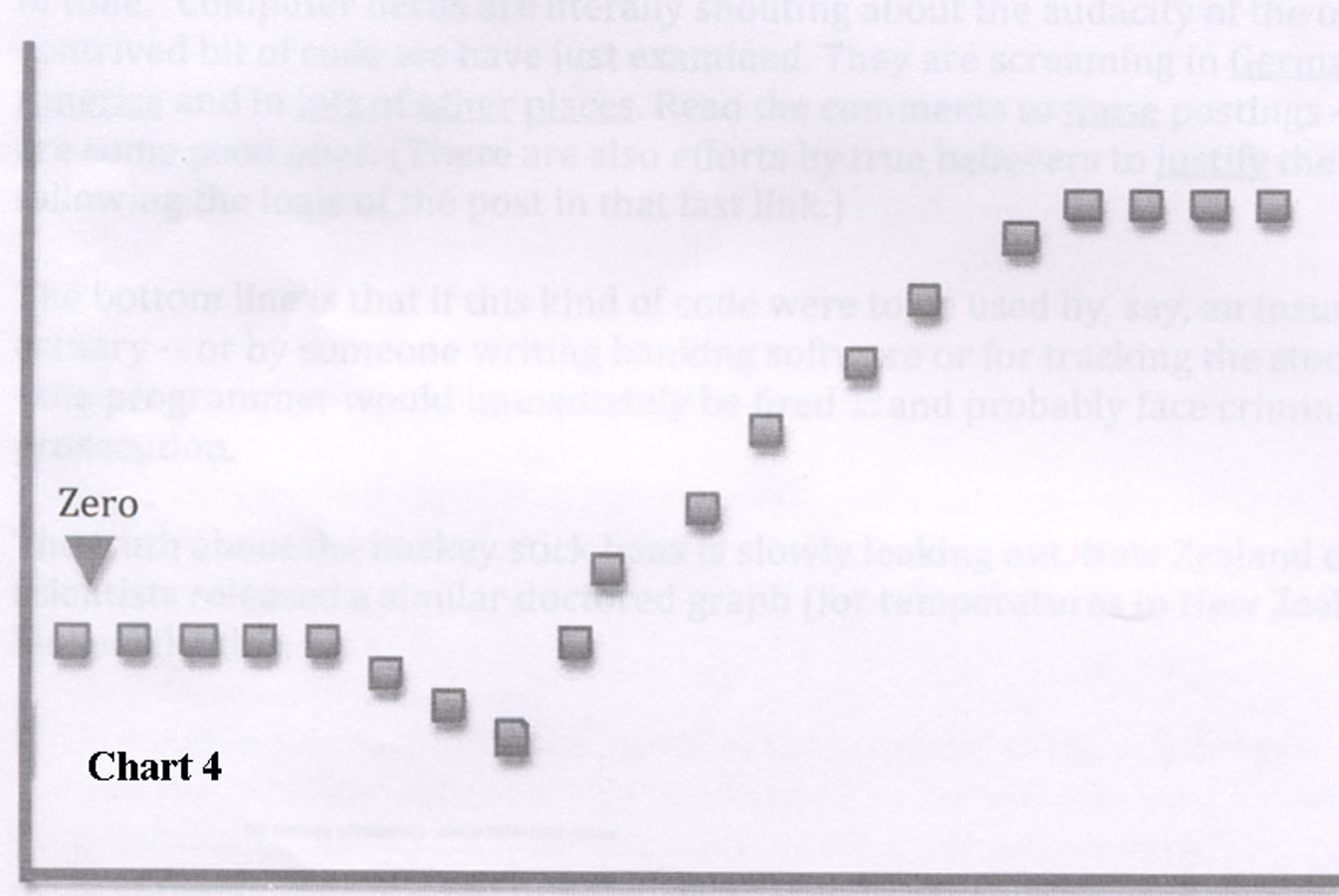 Graph 4 this still looks an awful lot like the "hockey stick." In short, no matter how you read the code, it was designed to create a phony outcome.
But don't take my word for it. Computer experts everywhere are all over this particular con game, and many other deceptions, that came out of the CRU files.
Many years ago, I was an instructor in logic at the university level. Some of my best students were young people who planned on entering the new, exciting, rapidly expanding, and lucrative fields of computer science and computer programming.
A solid grasp of logic was, and still is, a great way to start an education in the computer sciences -- since computer programs are grounded in the basic rules and the syntax (sometimes slightly adjusted) of Boolean logic.
Computer programmers are often referred to as "nerds." In fact, they are meticulous; they have to be. Their programs don't work if they're lazy, or skips a step, or ignores the rules of logic and syntax that make computers do the job they are supposed to do. This is why competent computer programmers can spot a phony and a cheater from a mile away.
Writing the beautiful and logical structure of a computer code is almost like writing music. It is very easy for a skilled computer programmer to detect code that is "out of tune." Computer nerds are literally shouting about the audacity of the obviously contrived bit of code we have just examined. They are screaming in Germany, in America, and in lots of other places. Read the comments to these postings -- there are some good ones. (There are also efforts by true believers to justify the code. Try following the logic of the post in that last link.)
The bottom line is that if this kind of code were to be used by, say, an insurance actuary -- or by someone writing banking software or for tracking the stock market -- the programmer would immediately be fired...and probably face criminal prosecution.
The truth about the hockey stick hoax is slowly leaking out. New Zealand climate scientists released a similar doctored graph (for temperatures in New Zealand) that looked like this: 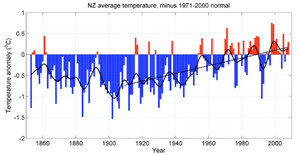 The scientists in New Zealand didn't destroy the raw data. (Oops.) The raw temperature data from New Zealand, when fed into a computer without a "fudge factor," looks like this: 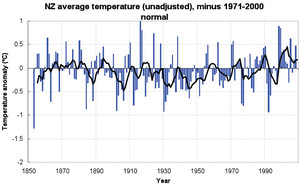 In short, New Zealand has not heated up in the last 150 years. Not a bit. Zealous scientists promoting AGW (not the actual weather) caused the "warming" in New Zealand.  (Notice how closely the doctored Graph 5 from New Zealand resembles doctored Graph 1 and the code from the CRU we have examined.)
Any computer programmer worth his or her salt will tell you, "Garbage in, garbage out." The garbage in the AGW debate turns out to be the scientists who are writing fraudulent computer codes. Time to take out the trash.
Larrey Anderson is a writer, a philosopher, and submissions editor for American Thinker. He is the author of The Order of the Beloved, and the memoir Underground: Life and Survival in the Russian Black Market.
[i] REM statements are little notes made "in the margins" of the actual code.
[ii] Notice the title "Reconstructed Temperature." As we will see, "reconstructed temperature" turns out to be quite the litotes for AGW proponents.
[iii] The CRU has admitted to destroying most of the raw data. Those digging into the CRU documents are still trying to figure out which data was used for what programs. Sometimes this is clear in the files and sometimes it is not.
[iv] The +2.6 "fudge factor" in the 1980s is a magnitude 26 times greater than the -0.1 decrease in the 1920s -- but I do not have enough room to show the actual proportions of bars to the numbers in the space allotted.
[v] For example, I cannot tell if the second +2.6 is added to the previously adjusted +2.6 or if each is an individual adjustment to the "raw data" and not cumulative. Since the temperature of the hockey stick increases exponentially, I assume that the effect of the program is cumulative -- i.e., Graph 3, not Graph 4, more closely represents the effect of the program on the raw data. Even if I am wrong, the code still creates a nonexistent (or grossly inaccurate) increase in actual and predicted temperatures. I would welcome clarification on this point from someone more familiar with the code than I am. See Lord Monckton's discussion of the code here.
|