Obama the Lightworker and the War in Afghanistan

Alas, how have the mighty fallen! The Angel Barack has gone the way of his hero's hero, Lucifer, the Angel of Light, crashing on down -- far, far down -- from Fairyworker Heaven to the lowest circles of Darkness. The sight is absolutely Miltonian, a tragedy for all except for a few adults who knew perfectly well that it was bound to happen when reality struck this White House. ShaZZAM!

Obama has gone to war. The Lightworker has sinned. 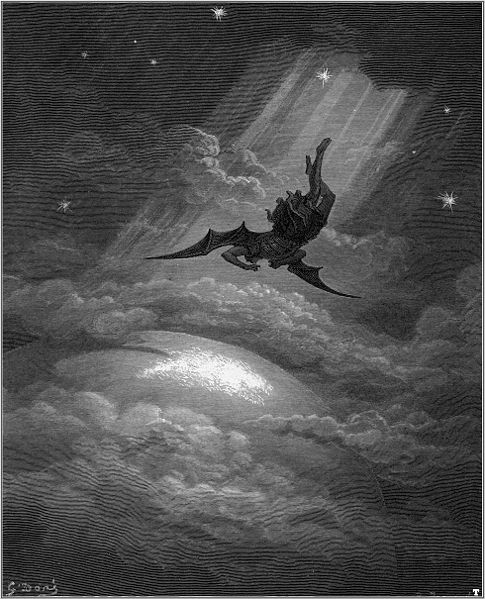 Yes, it's the Good War in Afghanistan, but if you scratch below the surface of liberal media twaddle, the Iraq War is still going on, with al-Qaida truck bombs in the crowded market places of Baghdad. Hundreds of innocent men, women and children, bloody and dead. We still have 140,000 troops in Iraq.
Still, Iraq is now just a Temporary Overseas Contingency, so it doesn't count. It's not like a real war. Thank Heavens we have a Lightworker in the White House.
Well, OK, we still have Predator assassinations of AQ baddies in AfPak, but that's only the leftovers of 9/11...
Well, all right, we have Ahmadinemad with his nukes coming up fast, with Israel threatening to strike Natanz, like, tomorrow...
Afghanistan! Obama's war of necessity! Or was it a war of choice? Can anybody remember why we are in Afghanistan? Was it that 9/11 thing?
Shades of Boosh! Boosh the Son of Boosh! Shades of Darth Cheney!
Reluctantly, ambivalently, apologizing all over, still hoping to fake out a hundred million liberal suckers, after weeks of what we now recognize to be a typical Obama act -- a media seminar at the White House for everybody to hear the president agonizing back and forth, dithering, dithering...
Then Obama said OK to the Pentagon.
How's that for decisiveness?
So the United States is finally sending off 30,000 reinforcements to Afghanistan to join 70,000 soldiers and marines already there, which is pretty much what General McChrystal recommended many moons ago. The bad guys haven't stopped killing people, blowing up schools that admit girls, or terrorizing the population. Only the liberal media have lost track of the plot.
Still, our infantile left is in deep mourning for the Angel Obama, Barack Hussein Lightworker, Last Year's Hope of Change.
Did you notice that Prince Obama just picked up his Nobel Prize in a huff, ticking off the King and Queen of Norway with his bad manners, and scurried home? This is not the Obama we have come to know and giggle at. Look at all the opportunities for ego-tripping and grandstanding that he passed up.
The sight of Our Prince of Chicago running into the Concrete Wall of Reality would be funny if the characters weren't such sad sacks. And if war were not a tough adult business.
All the credit goes to our military, like Generals Petraeus and McChrystal, who are keeping the world safe while Hamlet is firing off another soliloquy back at the White House.
Fortunately, we do have adults in the US military. They see too much bad stuff to live in pink, fuzzy fantasy. Maybe one of them should run for president -- how about electing a grownup to the White House next time?
The Left has kicked out all the adults from the party -- people like Senator Joe Lieberman. The Democrats are permanently infantilized. Remember the Children of the Sixties? Well, they are still stuck back there, wondering what happened. That's why Nancy Pelosi has that Eternally Surprised look. That's why a while ago, when somebody asked her a question she couldn't answer, she snapped, "I'm trying to save the planet!" and scurried off. Only in San Francisco.
The whole Obama Medi-Scam campaign reveals exactly the same mindset -- infantile thinking, completely infantile. Let's spend another ten trillion bucks! Whee! Let's steal it from the old and sick and give it to the poor! No, let's do it the other way! Let's steal it from the kids and give it to the Democrat Machines! Aaaaright! Even the Senate Democrats have lost the plot by now. Only Harry Reid knows the latest dope, and let's face it: Harry is kind of losing it up there. It's the senile leading the infantile.
In psychiatry it's called magical thinking. It's what little kids do 'til they get to first grade. Then they grow up.
...Except for liberals, who just stay there, emotionally speaking.
Oh, well. It's only the fate of the Free World.
Easy come, easy go.
|