Warning: mysqli_free_result() expects parameter 1 to be mysqli_result, bool given in /var/www/html/americanthinker/admin/common/functions/func.general.php on line 126
 E-mails, Schme-mails -- Look at the Polar Ice Caps - American Thinker
|

Apparently, you don't really need a whole bunch of temperature data to know what's happening with temperatures. Don't bother looking for trends of 0.007 degrees per year averaged over the planet (the rate over the last century, per the IPCC) by wading through all that adjusted, quality-controlled and homogenized data, fudge factors or not. Just look at the polar ice caps, and...QED.

Stop hyperventilating, all you climate-change deniers. The purloined e-mail correspondence published by skeptics last week -- portraying some leading climate researchers as petty, vindictive and tremendously eager to make their data fit accepted theories -- does not prove that global warming is a fraud.  If I'm wrong, somebody ought to tell the polar ice caps that they're free to stop melting.
-Eugene Robinson in The Washington Post.

I am thoroughly unimpressed with the belief that global warming scientists have been engaging in some kind of massive conspiracy to conceal the truth.  First, because we seem to be able to observe things like polar ice sheets melting, which point to warming.
-Megan McArdle in the Atlantic.

A picture is worth a thousand emails and pictures of the polar ice caps show a 20% decrease since 1979.
-Katie Couric in her Notebook.

One thing I might remind Eugene, Megan, Katie, and the rest of the "follow the ice caps" folks is that there are two poles on the planet and two polar ice caps: a north one and a south one. And only one has been shrinking. Also, our records of them go back only thirty years -- a relative blip in time when talking global climate change.
When temperatures get cooler over a decade or a few, alarmists blame it on ocean currents or something temporary we should ignore. The BBC, in its article "Next decade 'may see no warming,'" explains it for us.

The key to the new prediction is the natural cycle of ocean temperatures called the Atlantic Multidecadal Oscillation (AMO), which is closely related to the warm currents that bring heat from the tropics to the shores of Europe.
The cause of the oscillation is not well understood, but the cycle appears to come round about every 60 to 70 years.
"One message from our study is that in the short term, you can see changes in the global mean temperature that you might not expect given the reports of the Intergovernmental Panel on Climate Change (IPCC)," said Noel Keenlyside from the Leibniz Institute of Marine Sciences at Kiel University.

So you see, there are sixty- to seventy-year cycles that (a) are "not well understood" and (b) "you might not expect" to see in global mean temperature, given that the models the IPCC uses do not include them.
But in spite of all that, what happens with the north polar ice cap (2% of the earth's surface) in a thirty-year period trumps everything, trust us.  (The arctic ice sheet averages about ten million square kilometers, varying between about four and sixteen million each year. The area of the entire globe is about 510 million square kilometers. So the arctic ice cap represents less than 2% of the earth's surface.)
What these people are doing is taking only one of the two ice caps -- the north one -- and the difference in its extent over the most recent thirty years. That proves nothing about "global" anything. It is one tiny part of the planet over one relatively short timespan.
But okay, let's look at a picture, which Katie says is worth a thousand e-mails. My source is the Polar Research Group in the Department of Atmospheric Science at the University of Illinois, which is no den of deniers. 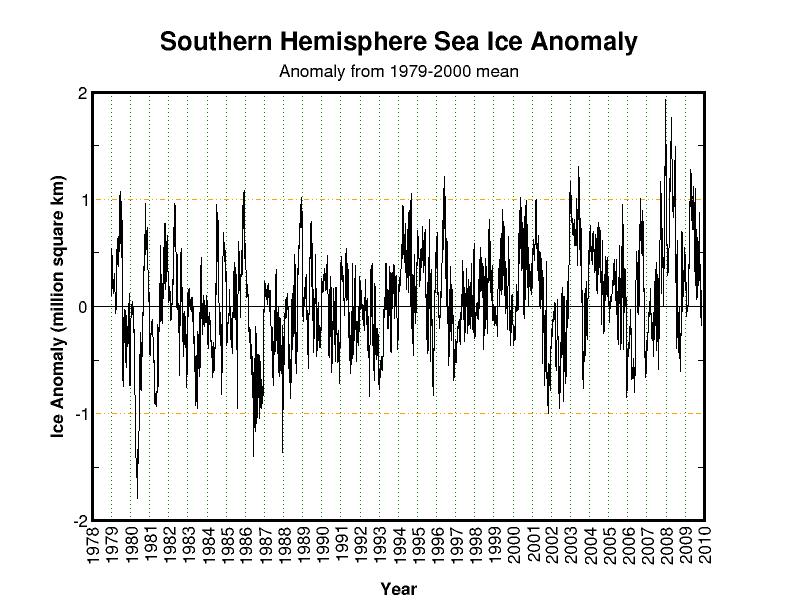 Source:  University of Illinois, Polar Research Group, Dept. of Atmospheric Sciences.
Funny...I don't see a 20% decline in this ice cap. In fact, it looks like a slight increase to me. Since 2003, it's about half a million square kilometers, or about 5%, above average. (Southern hemisphere sea ice is also about ten million square kilometers on average.)
So let's accept that the arctic ice sheet decreased 20%, as Katie said. The Antarctic ice sheet increased 5%. And both together represent about 4% of the earth's surface. And all that is over only thirty years, when even the advocates of man-caused climate change admit to a poorly understood sixty- to seventy-year cycle.
So looking at the polar ice caps tells us nothing, especially when the two caps are doing opposite things.
By its very nature, climate changes. That means it sometimes gets warmer and sometimes gets cooler. And some places get warmer while others get cooler. It all changes over both time and geography. The question is, what is it doing on balance?
And to know that, we need to look at all the data. But instead of being forthcoming and presenting everything, the alarmists cherry-pick only the warming data: the north ice cap, but not the Antarctic one. Greenland's melting land ice, but not Antarctica's growing land ice. The warm temperatures from 1980 to 2000, but not the warm temperatures from 1920 to 1940, or the cooler ones since 2000. The apparent warming since 1850, but not the even warmer medieval period.
The result is that you, the public, and your children in school are getting only half (or less than half) of the picture -- the glass-half-empty half. The warming half. In this way, the proponents of man-caused global warming can tell the "truth" while presenting the bigger lie. They tell only half the truth -- the warming half.
There are not "QEDs" out there.  You cannot just stick your head out the window. You cannot just look at "the" polar ice cap (there are two). You cannot fret about Greenland's melting land ice when Antarctica's land ice is ten times bigger and growing. Some glaciers shrink, but others grow.
Like so much else, this ultimately comes down to trust. Do you trust the U.N.'s climate scientists and the media to tell us the truth and the whole truth? That is exactly where the CRU e-mails enter the issue. We finally learned for sure that we could not trust these people. The scientific cabal called climate researchers constantly screened their data to make sure they showed us only the empty half of the glass (and arbitrarily adjusted much of what they did show).
Katie likes pictures. But Katie, you need to look at more than one picture of one place at one time to have even a clue of what the entire planet is doing over the long term. If you think a picture is worth so much, Katie, should we base all we know about you on this one? 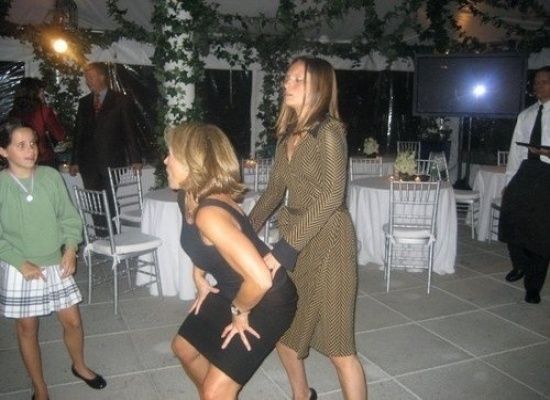 Source: Gawker, via The Huffington Post.
Randall Hoven can be contacted at randall.hoven@gmail.com or  via his web site, randallhoven.com.
|