Warning: mysqli_free_result() expects parameter 1 to be mysqli_result, bool given in /var/www/html/americanthinker/admin/common/functions/func.general.php on line 126
 Jerusalem Stone and the Genocide of Titus - American Thinker
|

Jerusalem Stone and the Genocide of Titus

Israel's high-rise buildings in Jerusalem are built out of Jerusalem stone, a beautiful natural building material that makes even the new city look gloriously resurrected from the very hills themselves. Obama is a third-world socialist, meaning that he sees everything through the lens of revenge against the Western colonialism of the 19th century. Where Obama sees "settlements," Israelis see nine hundred units of beautiful high-rise buildings made out of the living rock of the land.

Almost all Israelis serve in the army, and when you look at those stone buildings from a tactical viewpoint as soldiers do, you see rank upon rank of defensive positions. Bullets don't penetrate those Jerusalem stone walls. Even radiation weapons only penetrate one or two ranks of buildings, allowing for defensive positions to be erected behind them. While nothing is impermeable against heavy explosives and powerful rockets, each row of high-rises in Jerusalem can serve as a tactical fortification: a tank ditch or a strategic position for a team of soldiers. Having seen a century of attacks from Arabs, the Israelis can't avoid thinking like that.
Fifty miles south, Hamas still fires rockets at surrounding Israeli villages every week. A hundred miles north, Hezbollah has now been resupplied with tens of thousands of fresh long-range missiles from Tehran. So where Obama looks at Israel like the Dutch settlers of South Africa, the Israelis see the battle of Stalingrad: a place where Israel may take its last stand against another wave of tanks and RPGs and still turn the tide.
The normally fractious Israelis have finally discovered a common enemy, and it's Obama. Politics in Israel is about as contentious as it gets without members of parliament coming to regular fisticuffs Taiwanese-style. But now Obama has done the quarrelsome Israelis a favor...sort of. Ninety-six percent of the Israeli population believes that Obama is a threat to their survival. Israel is uniting against a common threat. Thank you, Mr. Obama.
The other day, an Israeli archeologist presented a discovery of Biblical coins going back to the fall of Jerusalem in 67-70 C.E. It was the Roman Emperor-to-be Titus Flavius Vespasianus who conquered Jerusalem that year and razed it to the ground.
That was a long time ago, you say. But in Jerusalem, it's right there in a never-ending flow of archeological discoveries. It's here and now. Most of those Second Temple shekels went molten in the fire that swept the city when the Romans finally brought down the walls, killing innumerable Jews. Genocide was official Roman policy for rebels against Rome. In the city of Rome today you can still see the triumphal arch Titus built for himself, depicting his celebratory parade followed by the defeated Jews in chains. They are carrying an enormous Menorah carved in the marble on the top of Titus' triumphal arch. 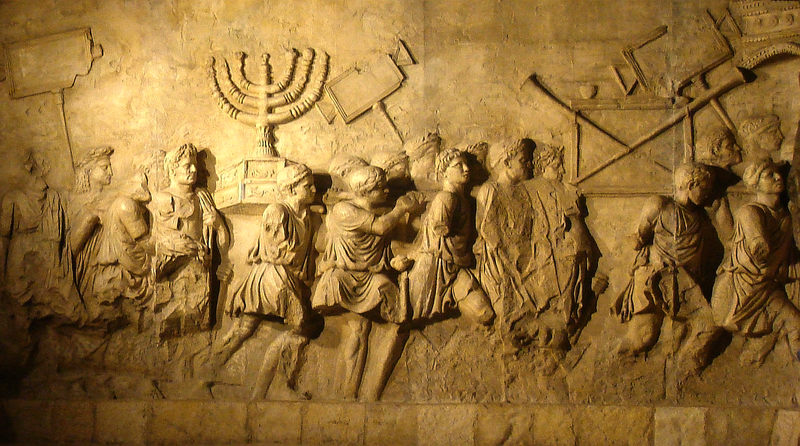 American military people can still understand that, but most American civilians can't. We live only in the present. The average American has forgotten even Pearl Harbor, not to mention all the other bloody American sacrifices that still make us safe today. Third-world Socialists like Obama can never, ever understand it. Obama was quoted sanctimoniously honking that "more settlement-building doesn't make Israel safer." That lofty and typically arrogant platitude is contradicted for Israelis when they look at those rows upon rows of Jerusalem stone buildings, every row another fortification against an enemy that has never stopped attacking. The "settlers" are those people putting their bodies -- and their children's bodies -- on the line of defense.
There's not a single family in Israel that hasn't lost relatives in war and genocide -- usually whole generations in the Holocaust, or a beloved son or father in the constant warfare waged against Israel by Syria, Egypt, Hamas, Hezbollah, and now Iran. Obama has no idea. Millions of Israelis who hail from Muslim lands look back to two thousand years of miserably inferior dhimmi status, where every Muslim act of oppression was meant to wound and crush the morale of the Jews who lived there. Israel has traded land for peace for a hundred years; it has never satisfied the militant Arabs. Obama is trying to nibble away at the next major concession: the newly walled and fortified city of Jerusalem. Meanwhile, Hamas TV is indoctrinating Arab toddlers to prepare them for another genocide, and Ahmadinejad is promising to do it with nukes.
And yet the Israelis yearn for peace. They are like us. War seems an anomaly to them, but in the long reach of history, warfare is the norm and peace is the exception. Europeans have been protected by the United States for sixty years, and by now they have come to expect our protection as an entitlement, like Obama's Mob-O-Care. When the United States fails to deliver on those defensive installations in Poland and the Czech Republic, Leftist Europeans who have been screaming at George W. Bush for years suddenly turn scared. Where the hell is Uncle Sam when they need him? That's so-called American imperialism.
In fact, it's just hostile-dependent rage, like a teenager unwilling to leave home. The anger is real and constant, all right, but he still won't clean his bedroom or earn his own living. That's Europe today,  just like it is our dependent domestic populations that live on welfare. It's their right, dammit! Give that money, honey. You owe it to us for, ummm ... well, slavery? They know nothing about slavery.
It was Josephus who wrote the definitive history of the Jewish War. He was a turncoat who started as a Jewish rebel and became a citizen of Rome -- adopting the name of the Hitler of his time, Titus Flavius Josephus. Yet he saw both sides and could write a history for the ages.
So in Book VII, Chapter 1 of his WARS OF THE JEWS, OR HISTORY OF THE DESTRUCTION OF JERUSALEM, we can still read, after Titus conquered Jerusalem,

Now as soon as the army had no more people to slay or to plunder, because there remained none to be the objects of their fury ... Caesar gave orders that they should now demolish the entire city and temple ... and so much of the wall as enclosed the city on the west side. This wall was spared, in order to afford a camp for such (Roman soldiers) as were to lie in garrison, as were the towers also spared, in order to demonstrate to posterity what kind of city it was, and how well fortified, which the Roman valor had subdued; but for all the rest of the wall, it was so thoroughly laid even with the ground by those that dug it up to the foundation, that there was left nothing to make those that came thither believe it had ever been inhabited. This was the end which Jerusalem came to ... a city otherwise of great magnificence, and of mighty fame among all mankind.

That was only yesterday.
On the basics, nothing has changed.