Warning: mysqli_free_result() expects parameter 1 to be mysqli_result, bool given in /var/www/html/americanthinker/admin/common/functions/func.general.php on line 126
 Vladimir Putin and the Russian Inferiority Complex - American Thinker
|

Vlad "the poisoner" Putin isn't such a tough guy after all. He's a sucker for Russian power and glory. That is why he has just proclaimed that it's OK for Ahmadinejad and the Twelver Suicide Cult of Tehran to have nuclear weapons. Putin is a fool. Like all the Soviet leaders, he is going to end up harming his nation to pursue his own grandiosity.

The Russian inferiority complex is a cliché of European history. It has always existed, but it is often dated back to Peter the Great, who tried desperately to bring Imperial Russia into the 17th century. Peter went to study ship-building and other new technology in the Netherlands, which is one reason why the Russian flag and the Dutch flag have the same colors. Communism was the way many Russians believed they could leapfrog Europe and America to get to become the most "progressive" nation in the world.
Putin has called the breakdown of the Soviet Empire (by its internal contradictions) the greatest catastrophe of the 20th century. It wasn't that. It was a great blessing, as the Poles and Czechs still remember. Even some Western Europeans haven't forgotten, though they like to rage against the United States. When push comes to shove they always come to Uncle again.
So Putin is desperately trying to make Russia a Great Power again, for reasons of national ego. That's what inferiority feelings do; they make people flip into phony grandiosity. You can see it in the White House today. But Obama's terrible weakness of will is Putin's opportunity. This is a game of fools playing against fools.
What's wrong with Putin's reasoning? Vladimir Putin has proclaimed that any Iranian nuclear attack would be preempted by the Russian Empire, Vsn. 2.00 (vaporware). I mean that about vaporware, because while Russia is playing chess on the international scene, A'jad and his imam, Mohzen Yazdi, are playing Russian Roulette -- The Martyrdom for Allah. 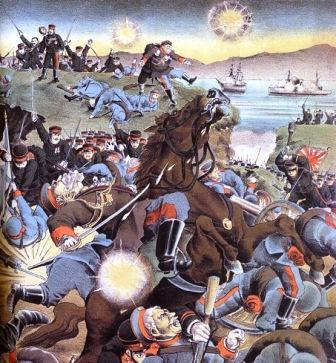 Russia has been defeated before by gamers playing by different rules. Imperial Russia was beaten in 1904 by Imperial Japan, which stunned the Tsar by ignoring the western rules of combat, failing to openly declare war before attacking. Russia played a game of defense and delay, while Japan was relentlessly powered. The Bushido warriors were happy to die for the glory of their Divine Emperor, while Russian soldiers and sailors were not so fanatically devoted to Tsar Nikolas, who went down thirteen years later when the Bolsheviks shot him and his family, and thus ended four centuries of Romanov rule.
The lesson still is unlearned that martyrdom warriors playing from a nontraditional playbook have an inherent advantage over chess players. They are more willing to die. Putin's "preemptive nuclear strategy" makes the crucial assumption that the Russians have penetrated Tehran so deeply that they will be able to predict and preempt that crucial moment when A'jad's finger, hovering over the nuclear button, will descend and launch nukes. But nobody knows that moment of decision, probably not even the Khomeiniacs themselves. Two months ago Iranian college students were getting bloodied in the streets of Tehran by Basiji and Revolutionary Guards. The regime is unstable. Would Hitler have launched nukes rather than be overthrown by the Junker Coup? You bet. Would Tojo? Yes. Would A'jad?
Who knows? Vladimir Putin says he knows. What he is really hoping is that (a) Russia will get more influence and control in the Middle East by driving the Americans back, using Tehran as a proxy; (b) the inevitable nuclear arms race between Sunni Arabs and a new Persian Nuclear Caliphate will allow Russia to coordinate oil prices with OPEC, so as to raise add more gold to its coffers.
Both of those calculations are wild gambles, putting vast numbers of human lives on the line. Putin is letting the nuclear genie out of the bottle; but the original genie is a Persian-Arab Jinn, and the psychology of the Persian and Arab world is still wildly fantasy-driven. Russia is a European nation in its thinking, with a huge Asian appendix. The Arabs and Persians are now going through a massive regression to medieval times, when the Muslims conquered the known world in three generations. They were just more willing to die for Allah than the ancient Persians and Byzantines. Tehran is a throwback to that time. Saudi Arabia never emerged from it.
Putin's cover for the Tehran nuke program may be the biggest strategic mistake in history, bar none. In the next two years it will trigger a nuclear arms race in the Middle East that wiser heads have been desperately trying to prevent. There's a reason why the Saudis have not developed nukes -- it's because they fear that arms race, knowing the long historical split between Sunnis and Shiites. It's not comfortable for the Saudis to see Iranian nukes fifty miles from their oil fields, and a few hundred miles from Mecca and Medina. But now they may have no choice; they have financed Pakistani nukes and missiles, and can all but pick up the phone and have them flown in.
Only American protection has kept the lid on the Middle East. With Obama playing Jimmy Carter, our protective umbrella has lost its credibility. Without credibility none of our defensive guarantees can last -- NATO, Japan, Taiwan, the Middle East. If the Europeans cannot trust the United States to defend it against a strategic attack, they will have to turn to the only alternative, Russia. Over the next decade they will finally have to develop both the political will and the weapons to threaten retaliation. Like the rest of the industrial world, they will also start building missile defenses just as fast as they can.
Between Putin and Obama the world has just been dragged much closer to the precipice. It's amazing what inferiority complexes will do.
|