Warning: mysqli_free_result() expects parameter 1 to be mysqli_result, bool given in /var/www/html/americanthinker/admin/common/functions/func.general.php on line 126
 The Recoveryless Recovery - American Thinker
|

The recession is over, supposedly. The preliminary estimate of the 3rd quarter's Gross Domestic Product was announced Thursday, and it showed the economy growing at an annual rate of 3.5% from July through September, after four consecutive quarters of decline.

As the Associated Press reported, waiting for the official call from the National Bureau of Economic Research -- specifically, its Business Cycle Dating Committee -- is all but a formality. That's funny; GDP growth was not used as the measure for timing the beginning of this recession. So why would it be used to time its end?
GDP last peaked in the 2nd quarter of 2008. Yet the NBER said the recession started in December 2007, six months earlier. In fact, the NBER declared the recession before we'd even had two consecutive quarters of negative growth, the standard rule-of-thumb for calling a recession.
Could it be political?  The NBER's Business Cycle Dating Committee is the "official" caller of recessions.  It looks for peaks and troughs in economic indicators.  It explains its method as follows.

First, we do not identify economic activity solely with real GDP, but use a range of indicators. Second, we place considerable emphasis on monthly indicators in arriving at a monthly chronology. Third, we consider the depth of the decline in economic activity...  Fourth, in examining the behavior of domestic production, we consider not only the conventional product-side GDP estimates, but also the conceptually equivalent income-side GDI estimates.

It might just be coincidence that of the seven members on the NBER's Business Cycle Dating Committee, one is the husband of Christina Romer, the Chair of President Obama's Council of Economic Advisors.  Mrs. Romer herself was a member of the NBER's board, along with her husband, until just after Obama's election.
Why would anyone want to date this recession as starting and ending early? The earlier the recession started, the more it could be blamed on President Bush, and the more it could be claimed to have caused the global recession, which started closer to the second quarter of 2008 when measured the old-fashioned way (two quarters of consecutive negative growth).  On the other hand, the earlier the recession is declared over, the more President Obama and the Democrats' stimulus can be credited with ending it.
Below is a graph of what GDP has been doing recently (not including this 3rd quarter estimate).  You see that real GDP peaked in the 2nd quarter of 2008, not in the 4th quarter of 2007 when the NBER said this recession started. 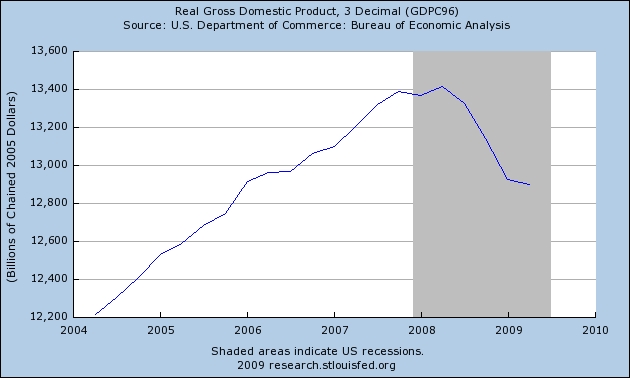 Source: St. Louis Fed.
This might not seem like a big deal, but two quarters is six months. While the US enjoyed that GDP growth in the spring of 2008 (2.8% annual rate), Europe was experiencing GDP declines. As the graph below shows, Europe's GDP peak was one quarter prior to the US's, and its recession was deeper. 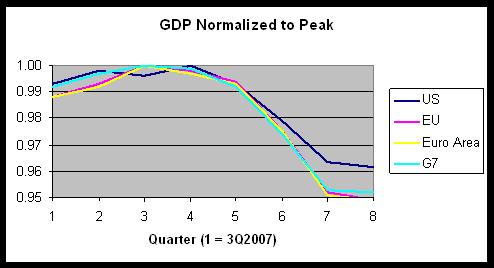 Source: OECD and author's calculations.
Yet the common wisdom is that our recession spread to Europe, not vice-versa. So is the common wisdom right? Unfortunately, we compare apples and oranges when we use the NBER's dates for US recession, but GDP for other countries.
The NBER and many economists would respond that there are multiple indicators of economic strength, not just GDP. Additionally, GDP is calculated on a quarterly basis, which does not lend itself to precise timing compared to monthly indicators.
So OK, let's look at other indicators. One is jobs, or the number of non-farm payrolls.  Below is a graph of that indicator. 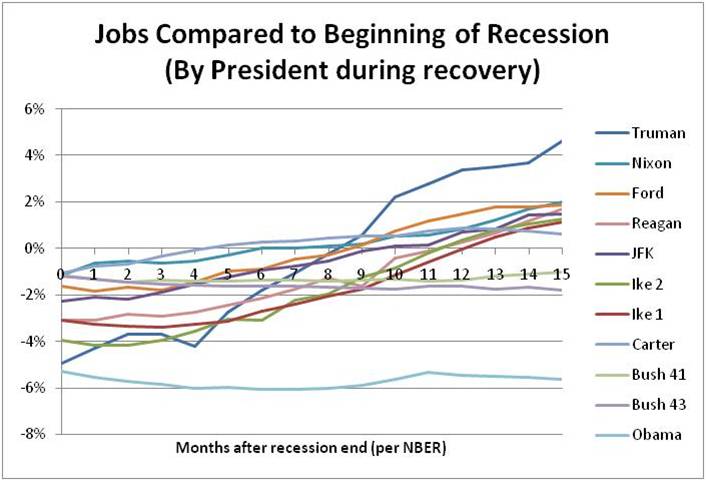 Source:  St. Louis Fed.
Sure enough, payrolls did peak in December of 2007, exactly when the NBER said this recession started. But look at the recent data, which is the September number. There is no sign of even a leveling off, much less an increase in jobs. By this indicator, the "trough" was not reached in the 3rd quarter, and does not even look imminent. In fact, the months of July, August, and September show payroll declines of 304 thousand, 201 thousand, and 263 thousand.
By that measure, there was not even clear deceleration in the decline, much less a turnaround.  What's more, the rates of job losses were greater in those months than in all of the first eight months of this "recession" as defined by the NBER.
There are yet other indicators of economic health. One is Industrial Production, graphed below. This indicator also peaked in December of 2007, when the NBER said this recession started. And it reached a trough in June 2009.  By this measure, the NBER could say the recession ended in June, or almost four months ago.  Expect that to happen. 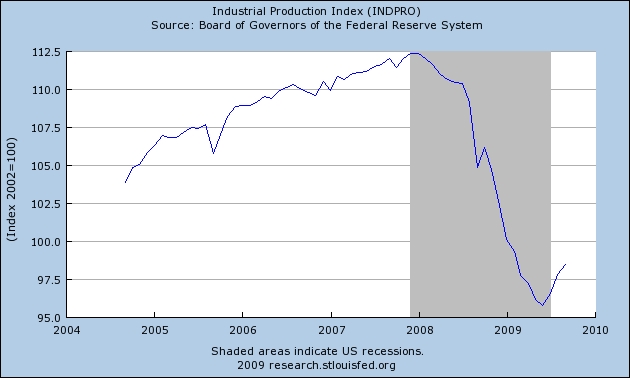 Source:  St. Louis Fed.
So Industrial Production could be the perfect indicator for the NBER to cling to. It peaked in December 2007 and troughed in June 2009. If the NBER says the recession is over, it can claim consistency for timing both its beginning and its end.
But what about other recessions?  Remember that other George W. Bush recession, the one the NBER said started in March 2001?  Funny thing, but Industrial Production peaked in September 2000.  That date would put the beginning of that recession six months earlier than the NBER dated its beginning, and solidly under President Clinton.
Funny how the NBER's recession calls always tend to blame President Bush for as much as possible, and his Democrat predecessor and successor for as little as possible.

Here are other possible economic indicators and how they have behaved in the last few years.  (Or look at graphs from the St. Louis Fed, which show few signs of recovery.  ) 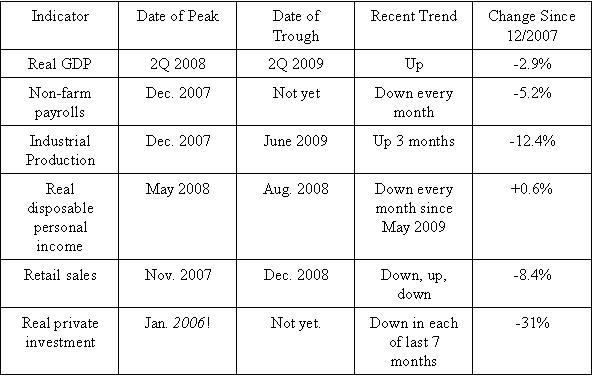 (Sources:  Real disposable personal income, Retail sales, Real private investment)
Frankly, you could read just about whatever you want from these indicators. By some measures (real personal disposable income, retail sales), the recession ended under President Bush! By others (GDP, industrial production), the recession ended in June. By yet others (jobs, real private investment), the end is nowhere in sight.
Heck, if you look at real disposable personal income closely (graphed below), we did all right under Bush, but not under Obama! In December 2008 it reached an historical high, except for May and June when Bush's stimulus (remember that?) came out. But the latest figure (August 2009) is down slightly from that historical high under Bush. Over all Bush's eight years, it was up 21%. Don't expect to see these factoids mentioned anywhere beyond this article. 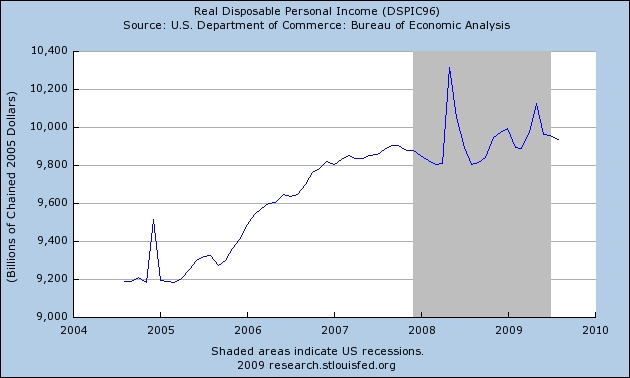 What I read overall is that the economy is in no way healthy or even getting better.  It is sputtering along more or less sideways at best. We are losing jobs -- over 200,000 per month -- and few in the private sector are bothering to invest in growth.
I wouldn't doubt that the recent GDP growth is due to government spending -- which produces little or nothing but gets counted in GDP -- and the very temporary Cash-for-Clunkers program. After all, the Congressional Budget Office expected federal government spending to rise from 21% to 27% of GDP in the last year. An increase of 6% of GDP in government spending, brought about by shoveling dollars out the door, might cause a blip up in GDP ledgers, but how real is it?  My guess: as real as cash-for-clunkers.
I repeat my call for the NBER to be more transparent in how it times recessions, or for the rest of us to ignore its calls. The NBER's Business Cycle Dating Committee is seven gurus neither elected by the public nor appointed by anyone who was. It uses no set method to come up with answers. The result is that the timing of recessions is inconsistent between their beginnings and ends, inconsistent among different US recessions, and inconsistent with recessions in other countries. The NBER's "method" is not transparent and lends itself to accusations of political bias.
If I can appoint myself to the American Thinker Recession Dating Committee of One, I claim our current recession started in June 2008, after Europe's recession started. I also claim that the 2001 "recession" actually started in 2000, while Bill Clinton was President. Actually, there was no real 2001 recession since there were no two quarters of consecutive negative growth then, and the worst case year-to-year GDP growth (4Q2000 to 4Q2001) was positive.
Just for fun, look at all the graphs above and recall that through 2006, Republicans controlled both houses of Congress, and that Democrats have controlled them both since.
Randall Hoven can be contacted at randall.hoven@gmail.com or  via his web site, randallhoven.com.
|